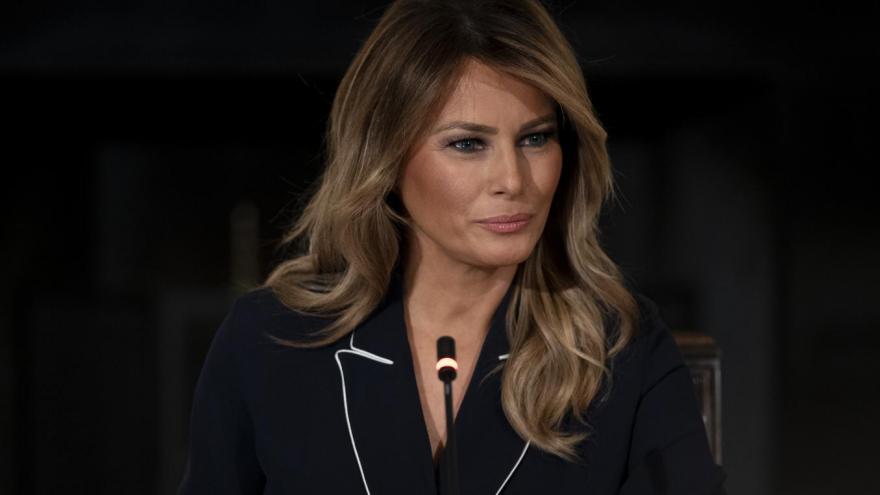 First lady Melania Trump, seen here at the White House on July 23, 2020 in Washington, DC, will speak at the Republican convention tonight (Tuesday) as GOP makes appeals to female voters.

(CNN) -- Melania Trump is hoping to use her enormous popularity on Tuesday at the Republican National Convention to help address one of the biggest challenges facing President Donald Trump in November -- his enormous deficit with female voters.

Speaking from the Rose Garden, the first lady is expected to give an uplifting speech reflecting on her work with children, her "Be Best" initiative, her second-term agenda and some of her favorite moments of the past three-and-a-half years as she makes the case that her husband should be reelected. Advisers have said that her speech was not vetted by anyone in the West Wing.

She is hoping to turn the page from the plagiarism controversy that surrounded her 2016 speech when the Trump campaign acknowledged that passages from her remarks had been taken from Michelle Obama's 2008 speech to the Democratic National Convention, in what was framed as an innocent mistake by a writer who helped her with the speech.

Her chief of staff and former White House press secretary, Stephanie Grisham, told MSNBC's Hallie Jackson on Tuesday morning that "every word in this speech is from her" and that it would be an "authentic" address that "comes from the heart."

Trump trailed Joe Biden by more than 20 points among women in polls throughout the summer, creating the possibility that he will lose female voters by historic margins in November. The high disapproval of his handling of the pandemic has placed an even greater drag on those numbers and his appeals to the "suburban housewives" of America -- a term that fell from favor in the 1960s -- do not seem to be helping him gain any traction.

CNN Director of Polling and Election Analytics Jennifer Agiesta notes that exit polls dating back to 1972 show that Democrats have never won a majority of White women. Former President Bill Clinton won White women by 48% to 43% in 1996, but the party has never gotten to the 50% threshold.

Though Tuesday night's program will touch on many different aspects of the Trump presidency, from the growth of the economy before the pandemic to the President's relationships with foreign leaders during a speech by Secretary of State Mike Pompeo, convention organizers plan to spend a sizable portion of the night dwelling on themes that will resonate with female voters while highlighting the women who have taken central roles in his administration.

Trump's daughter Tiffany Trump, who recently graduated from Georgetown Law School, will speak Tuesday night to address what she views as the problems inherent in the power of big tech companies, an area of the law that has captured her interest.

Following Donald Trump Jr.'s fiery speech Monday night, where he compared Biden to the Loch Ness Monster, his younger brother Eric Trump will also address the convention Tuesday night. The speech comes a day after the New York attorney general said the middle Trump son, who is an executive vice president at the Trump Organization, balked at sitting for a deposition in the state's civil investigation into whether the company improperly manipulated the value of its assets.

Half an hour before the night's convention programming began, Trump announced the pardon of Jon Ponder, a Black former convict who converted to Christianity and now works for prison reform. Ponder had been imprisoned for bank robbery.

"We believe that each person is made by God for a purpose. I will continue to give all Americans, including former inmates, the best chance to build a new life and achieve their own American dream," Trump said in a YouTube video filmed at the White House.

Ponder said he had misguidedly believed that the police were his enemies and praised Las Vegas police for social work in assimilating released prisoners and for laying their lives on the line to protect people.

"My hope for our great nation is to continue this path we are on of being the most prosperous country in the world," Ponder said in the video.

The move appeared designed to highlight Trump's success in passing criminal justice reform during his first term. But the timing of the pardon also highlighted how the President has used this power under the Constitution in ways that can also benefit him politically.

Ponder's pardon also fits into Trump's defense of the police amid a string of shootings of unarmed Black men by officers that helped to trigger the recent nationwide reckoning over race. Ponder credits police in Las Vegas with helping to reintegrate offenders into the community.

He had previously pardoned Alice Marie Johnson a Black woman who was in prison on nonviolent drugs charges and was brought to his attention by Kim Kardashian West. Trump has also pardoned heroes of the conservative movement Dinesh D'Souza, an author and Bernard Kerik, the former New York police chief who was convicted of felony tax charges.

Most notoriously, Trump this year commuted the sentence of his political trickster Roger Stone, who hadb een convicted of lying to Congress in part to protect the President.

Before Melania Trump's speech, Pompeo's address overlooking Jerusalem will be yet another lurch away from official decorum -- an example of the kind of move that the Trump team prizes.

In previous administrations, the top US diplomat often avoided the conventions to shield the continuity of US foreign policy from the fury of partisan politics. Yet Trump's diplomacy -- from North Korea to the Middle East and from China to climate change -- has often appeared mostly designed to satisfy promises he made to his base.

Officials said Pompeo is not breaking laws, but his decision to speak to the convention is being investigated by Democrats in the House to see if the speech violates the Hatch Act, which prevents federal employees from engaging in partisan politics while on duty, in a federal room or building, wearing an official uniform or insignia or using a government vehicle.

Pompeo is likely to argue that the current "America First" approach has made the country stronger and more respected abroad. He will likely highlight the recent diplomatic breakthrough between Israel and the United Arab Emirates as proof that the President's vaunted deal-making strategy is working abroad.

He is sure to delve into the administration's turn toward a confrontational policy with China. He may dwell on Trump's decision to kill Iranian intelligence chief Qasem Soleimani in a raid in Iraq in January that failed to trigger the region-wide conflagration that many critics predicted. And he may argue the North Atlantic Treaty Organization is stronger following Trump's harangues for more funding from member states.

But in reality, Trump has shattered the post-World War II and Cold War consensus of US diplomacy. While NATO has more cash, Trump has questioned the one-for-all and all-for-one defense principle that underpins its existence.

The President has cozied up to strongmen like Russia's Vladimir Putin, alienated US allies and trashed the idea that human rights are a core goal of US diplomacy. While he is now tough on China -- a geopolitical strategy with bipartisan support in Washington -- he spent months toadying to President Xi Jinping on his management of the virus, leaving the impression that he changed his tune to cover up his own botched management of the outbreak.

Trump adopted opposite positions in Iran and North Korea -- trashing an Obama administration six-nation agreement with the former and pursuing a friendly relationship with the tyrannical Kim Jong Un in photo-op summits. But the result in each case is the same: Nuclear programs in both countries are progressing.

The decision to move the US Embassy from Tel Aviv to Jerusalem, which will form the backdrop to Pompeo's address, was also controversial, as critics say it may have killed off the remote possibility of a final status peace deal with the Palestinians. But Trump left no doubt about the motivation in comments this month.

"We moved the capital of Israel to Jerusalem. That's for the evangelicals," he said in Wisconsin.

Pompeo may have a similar audience in mind with what is a golden photo-op opportunity given speculation he is considering a run for president himself in 2024. His speech will follow strong performances by two potential rivals, former US ambassador to the UN Nikki Haley and South Carolina Sen. Tim Scott, on Monday night.