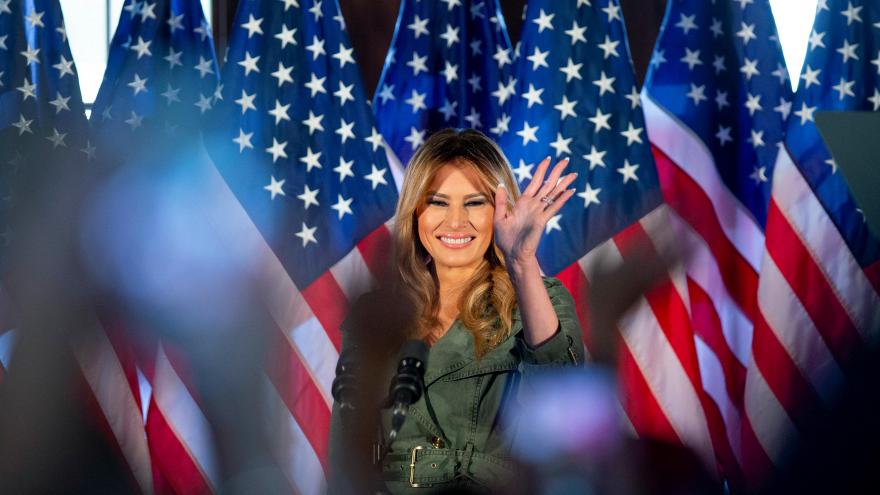 (CNN) -- First lady Melania Trump gave her fourth solo campaign speech on Monday afternoon in Huntersville, North Carolina. Trump, who before last Tuesday had not appeared on the campaign trail for more than a year, slammed Democrats in remarks that touched on Covid-19, the military, and echoes of President Donald Trump's law and order messaging.

"When rioters and looters were burning our cities and wrecking small businesses that belong to hard working families and bring jobs to our communities, where were the Democrats?"Trump said in a speech similar in content to the two she gave Saturday in Wisconsin and Pennsylvania.

The first lady's remarks on the trail have been explicitly partisan and more combative than most of the public remarks she has given during her tenure in the White House. Trump also targeted Democratic presidential nominee Joe Biden.

"Why should we trust Joe Biden when he suggests he can do a better job? All you have to do is look back on his 47 years in political life to determine whether you think he is suddenly capable of putting the American people first," said the first lady, echoing her husband's line of attack.

"Because of acts of intolerance and even violence, honest and hardworking Americans are sometimes afraid to put Trump signs in their yards. Members of our White House staff have been thrown out of restaurants just for serving their country. Even big tech companies are now politically censoring us. All this from the supposedly tolerant left," she said.

The first lady, who last month battled coronavirus, told the crowd of about 250 attendees, most of whom were wearing masks, that the media and Democrats are politicizing the pandemic.

"The Democrats, together with the media, have attempted to make Covid-19 the most politically charged, polarizing, and divisive topic of the last decade. Instead of working with our administration to unify and protect our nation, they only sought to attack us," she said.

The numbers of coronavirus cases are surging across the nation, and medical experts, including those on the White House's own coronavirus task force -- Dr. Deborah Birx and Dr. Anthony Fauci -- have warned of the dangers ahead for Americans as winter looms and there remains no comprehensive federal plan for prevention.

The first lady is expected to vote in person Tuesday morning in Palm Beach, Florida, where she is registered, before returning to the White House.