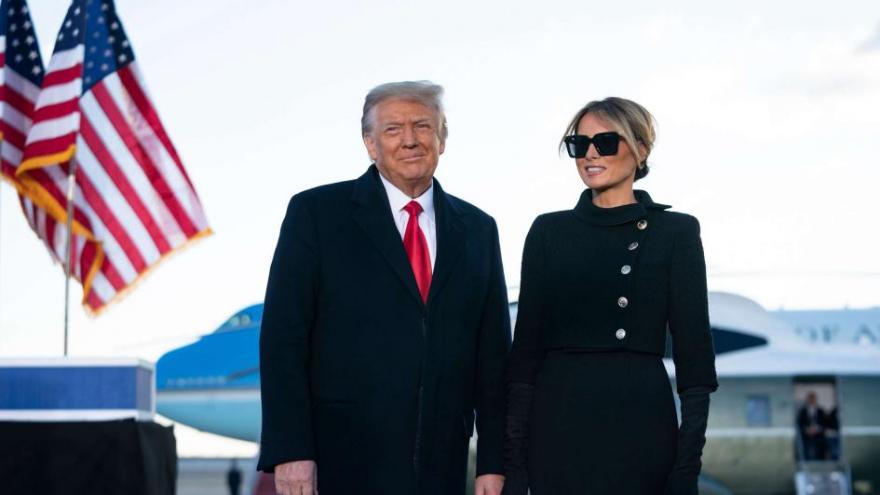 Former first lady Melania Trump is establishing a post-White House office in Palm Beach, Florida, according to two sources familiar with her plans.

Her intention is to "maintain 'Be Best,' " said one of the sources, Trump's loosely defined initiative that looks to help children. During her time in the White House, "Be Best" existed as a broad, three-pillared initiative, consisting of children's health and well-being, safety online and prevention of social media bullying and the impact of the opioid crisis on children.

Trump often did little to help clarify or expand on her platform during her time in the White House, often going weeks between Be Best-focused public events. The East Wing policy office was not robustly staffed, at times sat vacant, and at most had one full-time, dedicated East Wing employee.

Trump's post-White House office will consist of three of her White House staff members, the sources confirmed to CNN. Hayley D'Antuono served for four years as the former first lady's director of operations and trip supervisor, and is now Trump's chief of staff.

Mary "Casey" Finzer was a low-level staff assistant in the East Wing office, and one of her tasks included keeping stock of Trump's "gift closet," according to a source, where gifted items were kept and wrapped to be distributed at school or hospital events and for trips. Finzer is now a part of the operational and administrative side Trump's post-White House team.

Marcia Kelly, who served as an unpaid senior adviser to Trump when she was in the White House, is also staying onboard for the post-White House office, though it is unclear whether she will now receive a salary.

CNN reached out to a representative for Melania Trump and has not immediately received a response.

Both sources indicate Trump's office is for now functioning out of former President Donald Trump's private club, Mar-a-Lago, which also is where the former first family is living, and the staff members are at times working remotely. Melania Trump is looking for separate office space in the Palm Beach area.

Melania Trump exited the White House with the lowest favorability rating of her tenure as first lady, according to a recent CNN poll.

At 47%, more people have an unfavorable view of the first lady now than at any point since CNN first asked about views of her in February 2016. The poll, conducted by SSRS for CNN, puts Trump's favorable rating at 42%, with 12% of those asked answering they are unsure of their feelings about the first lady.

Trump's highest favorable rating was in May 2018 at 57%, according to a CNN poll taken at the time, which came on the heels of the first state dinner and Trump's attendance at the Texas funeral of the late first lady Barbara Bush. Trump went to the funeral without her husband.