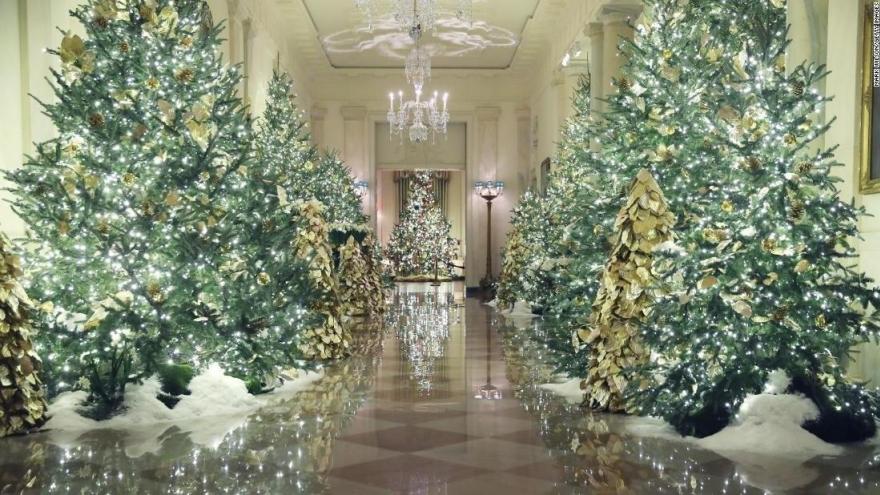 Christmas decorations are on display in the Grand Foyer at the White House December 2, 2019 in Washington, DC.

(CNN) -- The White House Christmas decorations are here once again, and this year, first lady Melania Trump has selected the familiar theme of patriotism. Her "Spirit of America" theme made for trees and wreaths and decorations adorned with ornaments depicting stars and stripes, the American flag and, in the East Room, trees topped with giant, golden eagles.

On Sunday night, upon returning from a long holiday weekend in Florida to celebrate Thanksgiving, Trump made a final walk-through at the White House, checking details of the decorations, which had been installed while she was out of town.

" 'The Spirit of America' is shining in the White House! I am delighted to share this beautiful exhibit of patriotism for all to see, and excited for everyone to experience the beauty of the #Christmas season!" she tweeted Monday morning, along with a video of herself, going room to room, tweaking and inspecting the details, a cupful of fake snow in one hand to sprinkle on branches of some of the 58 trees.

As is tradition, volunteers from all 50 states descended on the White House like elves, hanging the 800 feet of garlands, tying 15,000 bows and stringing more than 2,500 strands of lights. There are standard yearly decorations, such as the creche in the East Room, a remnant from the 16th century with figurines made in Italy, this year on display for the 52nd year in a row.

Additionally, Trump kept the tradition of a giant White House replica -- made from 200 pounds of gingerbread, with layers and layers of white icing and banisters of the South Portico and Truman Balcony made from raw spaghetti coated black with icing.

In the Blue Room is the official White House Christmas tree, which arrived the week before from Pitman, Pennsylvania. Standing at more than 18-feet, the tree touched the top of the ceiling, and was adorned with handmade paper flowers, representative of the state flowers from all 50 states. In the State Dining Room, Trump paid homage to the rose, the nation's flower, with a giant garland of red roses, spilling down the sides of the fireplace, beneath the portrait of Abraham Lincoln. A White House staffer noted to CNN the garland, though incredibly lifelike, was actually made of faux flowers, though real ones were placed in gold holders on a long dining room table.

This year, there were no signs of the red cranberry "trees" that spurred memes and criticism last year. The blood-red decorations were widely panned on social media, prompting a response from the first lady.

"We are in 21st century and everybody has a different taste. I think they look fantastic," she said in an interview at the time.

In the East Colonnade this season, the theme is white. Giant three-dimensional stars hang from the ceiling, and the only red is the carpeted floor.