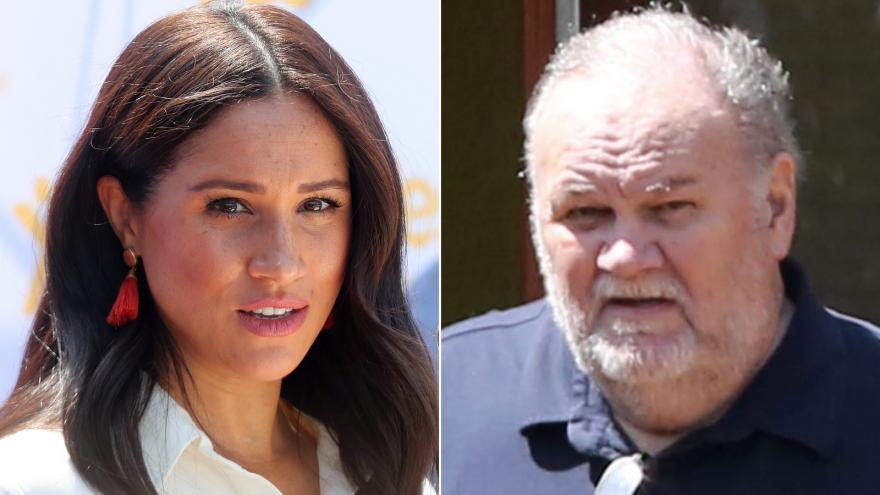 (CNN) -- Thomas Markle, the father of Meghan, Duchess of Sussex, could end up testifying against her in a potential court battle over her treatment in the UK media.

Meghan filed a lawsuit last year against the Mail on Sunday newspaper for allegedly unlawfully publishing a letter she wrote to her father.

But court documents filed by the paper on Tuesday reveal that he is part of the paper's defense, reports the Daily Mail, its sister publication.

It's not yet clear whether Markle will testify, should the case reach court, but these documents appear to show Meghan's father has been co-operating with the defense, making him a likely witness.

The Mail on Sunday and parent company Associated Newspapers will argue that there was "huge and legitimate" public interest in members of the royal family and their "personal relationships," according to the papers, the UK's PA news agency reported.

The documents reveal that the Mail on Sunday will use evidence from Markle, including the argument that he "had a weighty right to tell his version of what had happened between himself and his daughter including the contents of the letter," reports PA.

The Mail on Sunday told CNN that it would not make any official comment.

As a result, father and daughter could end up facing each other after years of speculation over their fraught relationship. Media reports have focused on a breakdown in communication between the pair, and Markle didn't attend Meghan's marriage to Prince Harry, citing health issues.

The Sussexes' family lawyers, Schillings Partners, declined to make any comment, and Markle's representatives did not immediately respond to CNN's request for comment.

The case is the latest development in a dramatic period for the royal family.

On January 8, Harry and Meghan made a shock announcement that they intend to "step back" from royal duties and "carve out a progressive new role" in the family.

In response the Queen called a crisis meeting of senior royals, after which the family announced a "period of transition" had been agreed while details of the Sussexes' new role are hammered out.

Meghan is currently in Canada, where she and Harry are expected to live part-time during this period.