Megan Rapinoe says fight for equal pay is about more than money. It's about investment in women's soccer 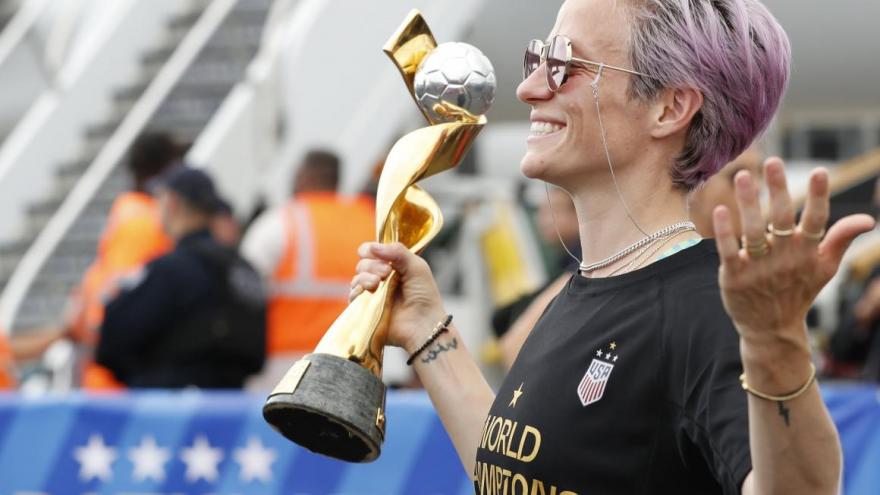 Megan Rapinoe could faintly hear the stadium erupt in chants of "equal pay" as she and her teammates prepared to celebrate their World Cup win.

(CNN) -- Megan Rapinoe could faintly hear the stadium erupt in chants of "equal pay" as she and her teammates prepared to celebrate their World Cup win.

Rapinoe, one of the 28 players who sued the United States Soccer Federation alleging gender discrimination, said it felt like an iconic turning point in history.

"I think we knew that this win ... was going to be bigger than soccer. But that moment, I think, just solidified everything," she told CNN's Anderson Cooper on Tuesday. "It was like this World Cup win is so much more than what was on the field."

Fresh off Sunday's World Cup win, Rapinoe spoke exclusively to CNN's "AC360" in a wide-ranging interview on her refusal to visit the White House, her message to President Trump and her fight for equality in the sport of soccer. She touched on her activism and her famous goal celebration.

The team will be celebrated Wednesday with a ticker tape parade through New York City.

On the fight for equal pay

The federal class-action lawsuit against the soccer federation alleges the men's national team earns more than the women's team, even though the women play more games and win more matches.

Rapinoe said the issue is about "so much more than the money."

She said the men's side of sports in general is seen as "this exciting opportunity, business opportunity that needs to be invested in."

"The women's is like, 'How cheap can we do this while sort of keeping them happy?'" she said.

On her message to President Trump

Rapinoe has been engaged in a war of words of sorts with President Trump after her refusal to visit the White House if the team was victorious.

In January, a reporter from Eight by Eight, a soccer magazine that explores the sport and its place in culture, asked Rapinoe if she was excited about going to the White House if her team won the Women's World Cup.

In a series of tweets, President Trump claimed sports teams "love coming to the White House" and attacked Rapinoe, saying she "should WIN first before she talks!"

"Finish the job!" the President said. Then he extended an invitation "win or lose."

Rapinoe told reporters that she stood by the comments "with the exception of the expletive; my mom would be very upset about that."

Rapinoe reiterated on Tuesday that she meant what she said.

"I meant with all the inflection and all of the sort of attitude that I gave with it, I meant all of it and every word of it," she said.

Rapinoe said she is still disinterested in visiting the White House.

"I would not go and every teammate that I've talked to explicitly about it would not go," she said.

"I don't think anyone on the team has any interest in lending the platform that we've worked so hard to build, the things that we fight for and the way that we live our life," she said, "I don't think we want that to be co-opted or corrupted by this administration."

Rapinoe said she envisions any White House visit as "an opportunity for this administration to sort of put us on display as their, sort of, guests for the day."

When asked what her message to the President would be, she said: "I think that I would say that your message is excluding people."

Over the years, the Californian has called President Trump "sexist," "misogynistic," "racist" "small-minded" and a "jerk but entertaining."

On her social activism

Rapinoe has been outspoken on social justice issues.

In 2016, she was among the first white professional athletes to show solidarity with professional football player Colin Kaepernick when media first began reporting on his kneeling during the national anthem to protest the police shootings of African-American men and other social injustices faced by black people in the United States.

Rapinoe knelt during a game a month after it was first noticed that Kaepernick was kneeling.

She said Tuesday she didn't see kneeling as disrespecting the flag or the anthem. She didn't understand the criticism against her.

"I think that taking care or others, standing up for yourself and other people, if they don't have the ability to do so, is very uniquely American," she said.

She added: "I don't think anybody can deny the horrors of racism and Jim Crow and mass incarceration, and what's happening on the southern border and gay rights and women's rights."

She recalled that the moments kneeling were a little difficult for her "especially after the first time that I did it, knowing how angry people were."

"It was difficult and heavy, but I had this immense sense of pride and responsibility in doing that, so I think that's where the strength of doing it a number of times came from," she said.

Rapinoe said since the team's World Cup win, she has been running on "fumes and water and adrenaline."

Rapinoe, the US National Team co-captain, is easily recognizable with her purple hair. The sight of her raising her hands up high in the corner of the field after scoring in the World Cup has become an indelible image.

She did the pose in a game before leaving for the World Cup matches. She decided to do it again as the team coped with the pressure on the world stage.

"It was a moment I think for everyone to celebrate through that, like you're not going to take our joy from anything. It was just like this 'we have arrived,' sort of," she said.