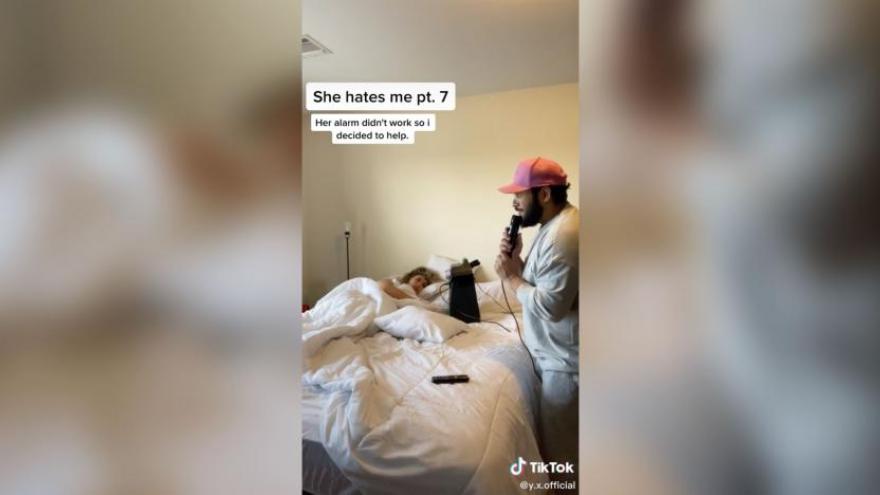 Yuni wakes up his girlfriend with one of his songs.

(CNN) -- A singer who went viral on TikTok for making videos of himself annoying his girlfriend with his songs is also touching people's hearts with his music.

It started in September when Yuni, who goes by YX as an artist, made a TikTok showing him singing a funny song while his girlfriend was sick in the bathroom.

"The plan wasn't to be on TikTok but my girlfriend ate a really, really bad apple pie and it affected her so, well, I sang about it," Yuni, 28, told CNN. "When the video went viral people started to gravitate towards the funny songs but also my serious music, which most people have been contacting me about," he said.

Yuni started using his ukulele to serenade his girlfriend at the most inopportune times and sharing her reaction with his TikTok followers. Yuni said "since 2020 has been tough," he wanted to change the narrative with his music.

One of his most popular videos is of him waking up his girlfriend after she overslept by plugging in a microphone, playing music, and singing. While she woke up annoyed, she couldn't stay mad for long because his lighthearted songs often also tap into his softer side.

He later made a video showing off his impressive vocal skills in a sweet apology song for his girlfriend.

One person commented on the Instagram video, "I hope [your] beautiful lady doesn't think it's embarrassing anymore because for us it not only gave us a laugh...it gave us HOPE...That very real moment was a relief."

Singing about his struggles

The artist, who began singing when he was 12 years old, says he now uses his music to release pent up emotions and as a "coping mechanism" for his anxiety and PTSD.

"I felt that as someone with PTSD who kept it hidden, it made me feel even more anxiety, it made me feel so much more alone," Yuni said. "PTSD is something not a lot of people talk about because they are afraid they will be looked at as crazy, and I want people like me to know it's okay."

The singer says he taught himself how to play seven instruments and learned how to record and produce music on his own four years ago. He wrote songs for other artists before deciding to take on projects of his own, he said.

Yuni said the experience of waking up one night screaming from an extreme panic attack inspired him to sing about his PTSD, "just to describe the feelings."

Since sharing his experience, he said he's heard from many people, including war veterans and an 8-year-old boy, who message him about their own struggles with PTSD.

"I wasn't sure how the world was going to react," Yuni said. "But people's reactions made me feel like we can all heal together and we don't have to be afraid of facing this alone. And 2020 sucks, so the fact that I'm making people laugh while helping people cope makes me feel amazing."

He is about to release his first single, titled "P.T.S.D: Praying Till Something is Different," a song about living with PTSD, which people can download by texting him at 781-995-4791.

Yuni said the texting feature allows people who watch his TikToks and listen to his music to reach out to him directly to build relationships.

"Most artists forget where they come from and I wanted to be accessible from day one," Yuni said. "I want them to grow with me and be a part of it all. It's tough responding to everyone but I have to do it."