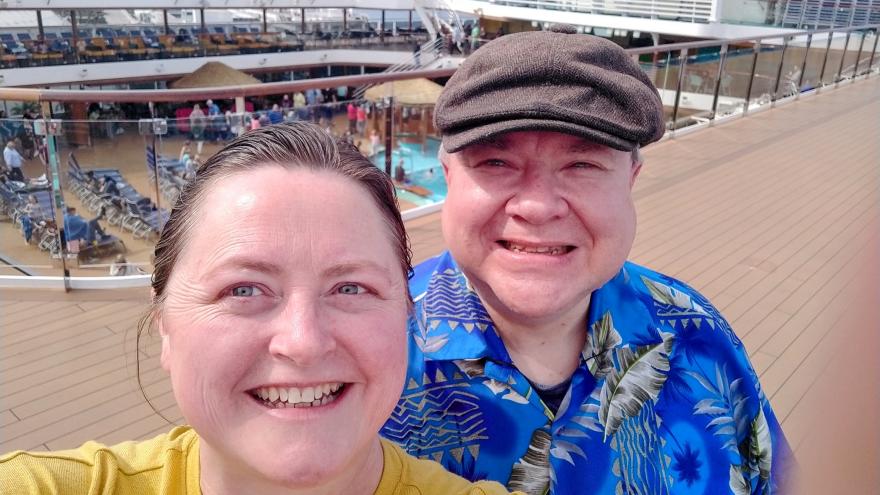 Editor's note: Monthly Ticket is a new CNN Travel series that spotlights some of the most fascinating topics in the travel world. In April, we're setting course for the diverse world of cruises. Whether you're looking for travel inspiration or insider knowledge, Monthly Ticket will take you there.

(CNN) -- Angelyn Burk has been in love with cruising since she boarded a megaship for the first time back in 1992 to sail in the Caribbean.

Now that the 53-year-old is retired from her accounting job, she and her husband, Richard, plan to sail off into the sunset for good -- by retiring aboard a cruise ship.

The Burks, who last lived in the Seattle area but have been location independent since May 2021, have done the math for what they can afford to spend for daily living during their retirement years.

Angelyn says the number comes to $100 per day or less for the two of them to cover their living expenses (with a buffer to spend up to $135 per day, if needed).

"Currently, this year, we have secured 86 cruise days with an average all-in cost of $89/day for both of us," she says via email. "Which includes room, food, entertainment, transportation, gratuity, port fees and taxes."

"This is well within our retirement budget," she says, adding that taking frequent cruises has led to the couple being offered deep discounts on future sailings through loyalty programs.

The bulk of the 86 days the Burks have booked this year are on Holland America, with roughly a week on a Carnival ship. And among the many destinations the couple will be visiting are Mexico, Costa Rica, Canada, Alaska, Japan, Indonesia and Vietnam.

"When planning out cruises, I try to stay on the same ship as long as possible, as long as it is cost-effective," says Angelyn, noting the couple plans to spend most of their retirement years living on cruise ships and not on land.

As for the advantages of moving aboard a floating home for their retirement, she says, those are obvious.

"Where else can you have your resort take you to different countries while relaxing by the pool or sleeping in a comfortable bed?"

An enticing retirement or work-from-anywhere plan

Considering retiring on a cruise ship? You're not alone.

Deciding to retire or work aboard a cruise ship is rare overall, but not new.

Before the pandemic, which interrupted some longer-term cruise ship stays, Crystal Cruises (which declared bankruptcy in early 2022) and Royal Caribbean Group had at least two passengers who lived aboard their ships for years on end and who became celebrities in cruising circles.

One of them, Mario Salcedo, is still working while cruising. Nicknamed Super Mario, Salcedo has lived on Royal Caribbean cruise ships for more than two decades. CNN Travel tried to reach him through Royal Caribbean, but the line says their top cruiser doesn't do media interviews anymore.

"There's a sense of home for all of our guests, especially those that spend a majority of the year sailing on our ships," Mark Tamis, a Royal Caribbean International senior vice president, says in a statement to CNN Travel. "For example, one of my favorite guests, Super Mario has an 'office' on the top deck of every ship he sails on and VOOM streaming internet service so that he can work from anywhere in the world."

Another famous long-term cruiser, "Mama" Lee Wachtstetter, spent years aboard Crystal Serenity and wrote a memoir, "I May be Homeless but You Should See my Yacht." It detailed some of her cruising shenanigans, including a rogue wave in the Mediterranean and the time she was kidnapped by a tuk-tuk driver in Thailand.

In March 2017, when cruising website Cruise Critic asked the question "Would you retire at sea?" in a poll on its website, 59% of respondents said they would love to retire at sea or at least try it for a couple of years (another 27% of respondents answered, "Maybe, if the price was right").

"It's something that's certainly aspirational," says Colleen McDaniel, Cruise Critic's editor-in-chief. "We hear from our cruisers all the time that retiring onboard is something they'd be interested in doing."

McDaniel points to the convenience factor of cruising -- "getting to see the world from your home where you have all your meals taken care of, great service and things like laundry onboard" -- as one of its main appeals for people considering retiring onboard.

Having a built-in community also appeals to people looking to move onto cruise ships longer term. Crew members can become like family for many long-term passengers, says McDaniel.

And the affordability of cruising compared with retired life on land is another selling point, she says.

"Assisted living is not a cheap proposition. It costs thousands and thousands of dollars a month, depending on where you're staying," McDaniel says. "So cruising is potentially a far more cost-effective way to retire."

Malcolm Myers, 88, who once spent 10 straight months aboard Seven Seas Voyager, a Regent Seven Seas ship, says that while the luxury line is not inexpensive, the average cost is comparable to what he pays in his high-end senior living community in Stuart, Florida.

"If I have to move to a senior (more comprehensive care) facility in my community, the cost of living on the ship would definitely be better," Myers says in an email to CNN. "And I would have a variety of entertainment, lectures and restaurants and medical care at my disposal without additional cost."

Cruise Critic's McDaniel notes that while cruise lines have a medical facility onboard, it's not the same as being next door to a hospital.

"There's only so much they can handle onboard," she says, so it's important to have evacuation insurance and land-based options for healthcare should you need medical care while cruising.

Interest in world cruises is booming

McDaniel points to world cruises and shorter Grand Voyages (usually around 30 to 40 days long) offered by many cruise lines as a way to "dip your toes" into longer-term cruising for a better understanding if retirement on a cruise ship is something that might appeal to you.

And she says she thinks there's a "real link between people willing to spend 100-plus nights on a ship and people who might see retiring on one as a real convenience."

Bookings for world cruises are booming, says Ralph Bias, president of Miami Beach-based Amazing Cruises, a luxury cruise booking agency that saw its revenue and bookings double from 2020 to 2021, and nearly triple in 2022.

"2023 is poised to be our biggest year, with World Cruises and Grand Voyages leading the way and accounting for about 50% of the revenue," Bias says.

Oceania Cruises recently reported a single-day booking record for its around the world in 180 days voyage, which sold out within 30 minutes of opening to reservations.

Because of high demand, Viking Cruises is offering two parallel world cruises for the first time in 2023/2024. The 138-day itineraries have 57 ports of call in 28 countries, with departures from Fort Lauderdale in December 2023 aboard the Viking Sky and Viking Neptune.

Even if you're not booking a world cruise, it's possible to book back-to-back cruises that don't repeat ports, says Bias.

"Silverseas, Seabourn, Regent -- all of these luxury cruise lines plan their schedules so the majority of their itineraries don't repeat," Bias says. "So you can say you want to go on the Seabourn Ovation and be on it for three months and never repeat a port."

"I have clients who are booked for months and months at a time," he says.

A concept tailored for residents

A new residential cruise ship adds options to the market for living aboard.

Suzanne Lankes is a retiree from Monterey Bay, California, who has already dipped her toes into cruising on more than 55 sailings around the world. The idea of retiring on a cruise ship first came to her when she spotted The World, a luxury floating megaship carrying 165 residences, moored in the Caribbean during a port of call.

But when she called to inquire about pricing to buy a residence aboard The World, it was out of her budget.

"They wanted me to prove I had $8 million in the bank or they wouldn't even talk to me," she says. "So I was disappointed."

But when Lankes heard about a new and more affordable option setting sail in 2024, she became one of the first people to snatch up a residence onboard MV Narrative -- a ship from a new "residential community at sea" startup called Storylines.

The ship will have 547 residences and amenities that include 20 dining and bar venues, an onboard education program for families with kids, a movie theater, hydroponic garden and extensive wellness and fitness offerings.

Outright purchases are between $1 million and $8 million, while a limited number of 12 and 24-year leases start at $500,000. And they are expected to sell out before the end of 2022, according to Storylines' co-founder Alister Punton.

Lankes bought her one-bedroom residence with a balcony on the ship in 2019 and plans to pay the annual fees -- which range from $65,000 to $200,000 based on unit size and double occupancy -- using the money she earns renting out her California home.

Marty Finver from Lake Worth, Florida, is another serial cruiser who bought an interior one-bedroom residence aboard the MV Narrative and is looking forward to less time spent booking cruises and more time sailing and seeing new places.

"Back-to-back cruising, while extremely enjoyable in the past, can be a pain in the neck at times," says Finver, who has spent more than 3,750 days at sea since 2004. "No matter how careful you are, there will always be gaps between cruises and this involves extra costs of hotels, flights and other inconveniences."

The MV Narrative's itinerary "follows the sun," says Storylines' co-founder Shannon Lee, with the ship scheduled to circumnavigate the globe every three years with stops in each geographic region for about three months (and an average of two to three days in each port of call).

Residents can fly in and out to meet the ship, spending as much time onboard as they like, and can even have guests join them.

When it comes to the destinations her future floating home will go, Lankes says she's not picky.

"I just love the fact that I'll be going wherever and I have community on board," she says. "I figured my residence would be sort of like my bedroom and the whole ship is my house."

Which makes the world her backyard.

Correction: An earlier version of this story incorrectly listed number of residences available on the Storylines ship and the costs to buy or lease them.