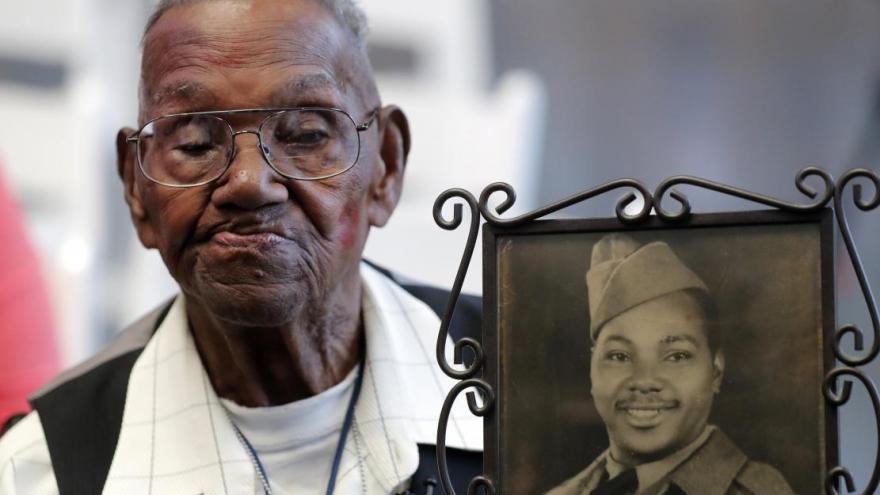 Lawrence Brooks, believed to be the oldest living American to have served during World War II celebrated his 110th birthday Thursday at the National World War II Museum in New Orleans. Born in 1909, Brooks served as a support worker in the Army's 91st Engineer Battalion, a majority African-American unit stationed in New Guinea and the Philippines during the war.

(CNN) -- His life nowadays is spent doting on his great grandkids.

But Lawrence Brooks also wears another hat: He is the oldest American to have served in World War II. He is 110.

Only 389,292 of the 16 million who served in the war are still alive. But, according to the US Department of Veterans Affairs, we are losing more than 290 veterans a day.

No matter what his age, Brooks' legacy will continue through his family. He is a father to five children, five stepchildren, and has 12 grandchildren and 23 great grandchildren. Brooks is even walking his daughter down the aisle next month.

In September, he celebrated his milestone birthday at the National World War II Museum in New Orleans.

Family, veterans, and current military service members joined Brooks at the museum, when he celebrated with cupcakes and a musical performance by the Victory Belles trio.

Born in 1909, Brooks served as a support worker in the Army's 91st Engineer Battalion, a majority African-American unit stationed in New Guinea and the Philippines during the war. He reached the rank of private first class.

He was the servant to three white officers in the battalion, the museum said in a press release.

He had an exhilarating brush with death

In an interview with the museum, Brooks recounted a story of riding in a C-47 cargo plane from Australia to New Guinea. The plane was loaded down with barbed wire but "one of the motors went out on it," he said.

To lighten the plane, those aboard threw much of the cargo into the ocean. Brooks threw the boxes out of the plane like his life depended on it: there were only enough parachutes on the plane for the pilot and the co-pilot.

Brooks said he joked to the aircraft's pilot: "If he's going to jump, I'm going to grab him."

Thankfully, he didn't have to resort to drastic measures.

Gustav Gerneth, who fought on the German side in the war and was captured as a Russian prisoner of war, is believed to be the oldest living WWII vet at 113 years old.

In a statement, National World War II Museum CEO Stephen Watson said that Brooks' life and service was filled with the kinds of "stories of bravery and determination" that the museum exists to celebrate.