Meet the internet sleuths tracking down the January 6 insurrectionists 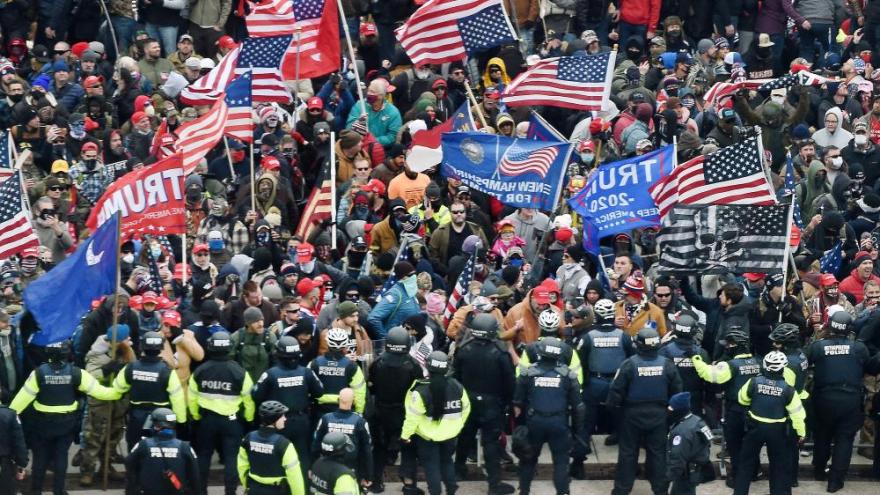 Forrest Rogers and the other internet sleuths known as the "Deep State Dogs" compiled video evidence on the suspect who tased a Police officer, on January 6 pictured here in Washington DC.

(CNN) -- From the mob, a seemingly unidentifiable hand reaches out with a Taser, in an attack that would leave DC Metropolitan Police Officer Michael Fanone begging for his life.

"I was beaten from, like, every direction. And then tased a number of times on the back of my neck," Fanone would later tell CNN, adding that he suffered a heart attack from the Taser assault. "I just remember yelling out that I have kids."

Forrest Rogers and the other internet sleuths known as the "Deep State Dogs" saw the interview and were determined to find out who was behind the Taser attack.

"I could not rest until he was apprehended, especially after seeing his first interview with CNN," Rogers, the Deep State Dogs spokesman, said. "It broke my heart."

They compiled video evidence on the Taser suspect showing him -- frame-by-frame -- reaching out and briefly holding the Taser to Fanone's neck. Then they traced the man through the January 6 crowd, revealing clear images of the suspect's face. Others on social media pitched in to help determine the man's identity.

"You can see him reaching out -- the suspect reaching out -- putting the Taser on Officer Fanone's neck, holding it very briefly," Rogers said. "If this video was not single-framed, it would have -- no one would have been able to have seen this, probably."

They delivered their findings to the FBI, as well as a Huffington Post reporter, who further vetted the alleged attacker's identity: Daniel Rodriguez. Rodriguez now faces eight charges, including assaulting Fanone, and has pleaded not guilty.

The Deep State Dogs are just one group in a sprawling social media community dedicated to rooting out insurrectionists after January 6. Experts and members of the community describe it as diverse and diffuse but united by a common goal: Accountability. But their efforts are also a rebuttal to Republicans looking to whitewash the horrifying events of that January day.

"Every time I hear a lawmaker try to downplay what happened, I think of the fear on their faces, and the pictures and footage we have of them fleeing from what was going on. And I know that they remember it too," said John Scott-Railton, a senior researcher at The Citizen Lab at the University of Toronto, who has also worked to help identify insurrectionists.

"This was a trauma for them, whatever they're saying now," he added. "And so, it's especially galling to watch them try to rewrite history."

A community of online sleuths

More than 450 people have been arrested in connection with the events on January 6 and the FBI has released videos and images, actively seeking the public's help in identifying members of the mob.

"As we have seen with dozens of cases so far, the tips matter," Samantha Shero, an FBI spokeswoman said in a statement. "As demonstrated by these arrests, the public has provided tremendous assistance to this investigation, and we are asking for continued help to identify other individuals for their role in the violence at the US Capitol."

But it's not always clear whether the efforts of online sedition hunters contributed to an investigation or if the FBI was already looking into suspects identified by internet sleuths. The indictment against Rodriguez, for instance, does not mention the Deep State Dogs. It's unclear if the FBI had already identified him as a suspect, although an earlier "seeking information" alert from the FBI does not include Rodriguez's photo among the suspects law enforcement was searching for.

Either way, Rodriguez's arrest was a gratifying moment for the group.

"It was a very rewarding feeling to know that there will possibly be justice served for the person who attacked Officer Fanone," Rogers said.

After the attack on the Capitol, the community of online sedition hunters began poring over video, images and social media footprints -- crowdsourcing information to try to determine the identities of the rioters. Sometimes they assigned alleged insurrectionists hashtags to stay organized as new clues and images emerged.

The community has evolved since its early days, members said, when the zeal from amateur sleuths led to some misfires.

"There was a tremendous amount of desire and eagerness, on the part of people who'd never done this kind of digging before to get involved and to help out," Scott-Railton said. "And that resulted in some overenthusiastic people making some misidentifications."

Since then, a set of best practices has emerged. Among the guiding principles -- which is often repeated in sedition hunters' tweets -- don't go naming names on social media.

The efforts have also grown more siloed, with certain groups dedicating their time to identifying Oath Keepers, while others try to track down rioters who attacked police. Some researchers have also moved their efforts into closed groups online. They often build their evidence quietly, with a small group of contributors, and then hand it off to law enforcement or journalists.

"This group of sedition hunters, they're exceptionally concentrated, tenacious and talented," Rogers said. "It's so impressive to see how it came together organically."

While it's unclear the full extent to which their efforts have aided law enforcement, some of their handiwork is sprinkled throughout court documents.

"The second tipster was a member of #SeditionHunters," according to a filing in another alleged rioter's case.

Mary, who is with the group Capitol Terrorists Exposers and would only agree to be identified by her first name, said a slice of her efforts came to light amid attempts to keep alleged Capitol rioter and Oath Keeper Jessica Watkins behind bars.

After uncovering a video showing Watkins allegedly pushing against riot police, Mary said she flagged the video for a New York Times reporter who shared the findings in a Twitter thread. Prosecutors later cited the thread in court documents arguing that Watkins should not be released.

Like many of the sedition hunters, Mary prefers to stay anonymous. Some of these researchers are concerned their safety could be threatened if their identities are revealed. Others said they aren't looking for credit and would rather keep the focus on the rioters they've helped identify.

Mary, who spends hours each week with her group building files on Oath Keepers, said it's a way for those who were horrified by the events of January 6 to contribute.

"If you can do anything about it, wouldn't you?" she said. "You have to do it because you want to fight for justice, you want to find out the truth."

Since the Capitol riot, the Justice Department said it has received more than 200,000 digital media tips.

They're still soliciting the public's help, particularly with identifying another 250 people that may have assaulted police or engaged in other violent activity at the Capitol.

"This will continue," Rogers said. "What we've seen now, in my opinion is only the drop in the bucket."