Meet Narwhal, the rescue puppy with a tail growing out of his forehead 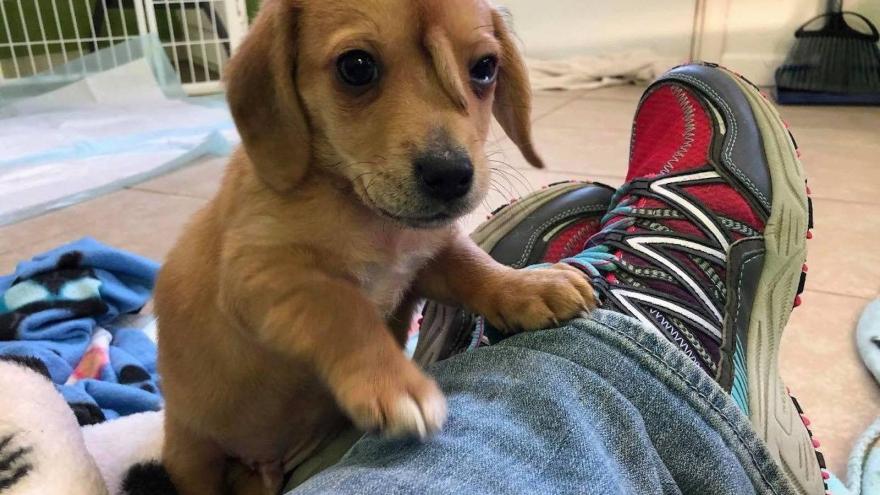 The puppy was discovered by Mac's Mission, a nonprofit organization for special needs dogs in Missouri.

(CNN) -- There's a 10-week-old puppy in Missouri with a tail growing out of his forehead.

Yes, his forehead. No, it doesn't wag. And, appropriately, his name is Narwhal.

Well, his full name is "Narwhal the Little Magical Furry Unicorn," according to dog rescue nonprofit organization Mac's Mission, which took him in after he was discovered last Saturday. He was found in the freezing cold, with what appears to be the beginnings of frostbite on one paw.

Unlike an actual narwhal whale, which has a protruding canine tooth that resembles a tusk, the tail on Narwhal's forehead is short and stubby, sprouting right between his eyes -- and flops from side to side when he plays. He has a normal tail, too, this one is just extra.

Workers at Mac's Mission, which specializes in special needs dogs who had been abused or born with defects, say he's recovering quickly, with the frostbite healing.

"He seems completely healthy other than some usual puppy worms he got meds for," said the organization in a Facebook post.

Vets took X-ray scans which showed the tail isn't connected to anything. It has no real use, as far as they can tell, but it also doesn't cause him any pain and there's no medical reason to remove it -- so the forehead tail is here to stay. "The unicorn face tail does not bother Narwhal and he never slows down just like any normal puppy," said the Facebook post.

He was found with another dog, which rescue workers speculate may be his father. This older dog, who has been named Poppa Smurf, is a Daschund Terrier mix -- so they assume Narwhal may have some Daschund in him as well.

It's not clear what happened to the two of them before they were discovered, but a spokesperson from Mac's Mission told CNN Narwhal is from rural Missouri in the Midwest, and loves to play -- and now, he has thousands of fans online, after his special tail catapulted him to internet fame.

The rush of online attention has been "crazy," the spokesperson, adding that the staff "feel like we're in a dream."

He's not yet ready for adoption, Mac's Mission said online -- but that hasn't stopped Narwhal's fans from wanting to take him home. The organization has already received over 50 adoption applications for him, a spokesperson told CNN.

Narwhal will likely be listed for adoption once he's older and has gone through more medical procedures like vaccinations. The staff say they also want to monitor his unicorn horn a little while longer to make sure it doesn't grow or become a problem.

"Everyone is super interested in him," the spokesperson said — but "we are hopeful they are seeing the other available dogs as well!"