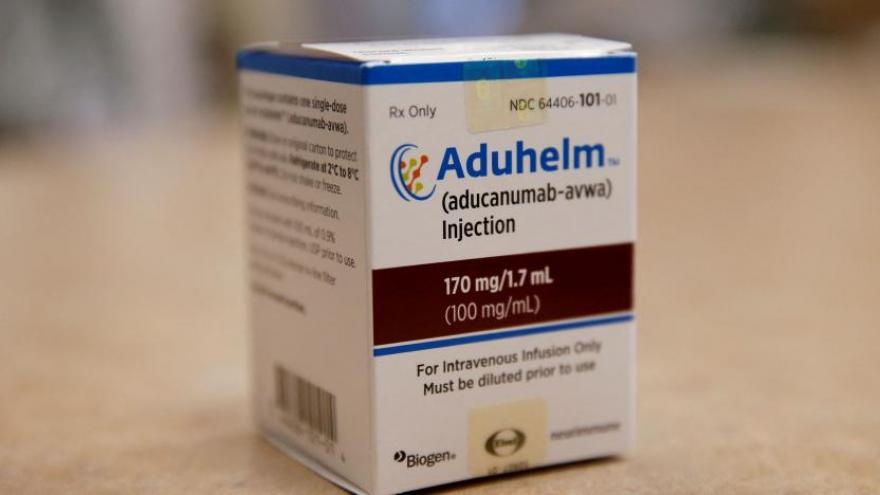 Medicare has proposed covering the controversial and costly Alzheimer's drug Aduhelm only for those enrolled in qualifying clinical trials, the Centers for Medicare and Medicaid Services announced January 11.

(CNN) -- Medicare has proposed covering the controversial and costly Alzheimer's drug Aduhelm only for those enrolled in qualifying clinical trials, the Centers for Medicare and Medicaid Services announced Tuesday.

The draft decision, the latest step in the drug's contentious path to market, would have far-reaching consequences both for millions of Alzheimer's patients and for tens of millions of Medicare enrollees. A final decision should be released by April 11.

The move is expected to restrict the number of people who could receive the medication. CMS did not have an estimate of how many patients might have access to Aduhelm through the trials.

The agency will accept public comments for 30 days and hopes to hear from Americans with Alzheimer's, their family members, patient advocacy groups, medical experts and others. Also, CMS emphasized that the clinical trials must reflect the diversity of the Medicare population with Alzheimer's.

It is weighing the benefits versus the risks associated with Aduhelm and similar Alzheimer's medications, including headaches, dizziness, falls and brain bleeds, said Dr. Lee Fleisher, CMS' chief medical officer.

It's unprecedented to require Medicare enrollees to participate in a clinical trial for a drug already approved by the US Food and Drug Administration that's being used for its intended purpose, said Tricia Neuman, executive director of the Kaiser Family Foundation's Program on Medicare Policy.

"CMS is moving forward cautiously in covering (Aduhelm) and similar drugs for Alzheimer's disease," she said, "to be sure that the drug actually works and doesn't cause harm."

The announcement comes the day after Health and Human Services Secretary Xavier Becerra took the unusual step of instructing the agency to reassess a major increase in Medicare Part B premiums for 2022, fueled in large part by Aduhelm.

Its maker, Biogen, last month announced it was cutting the price of the medication roughly in half to $28,200 a year.

"(It) will exclude almost all patients who may benefit," Biogen said in a statement, noting the process proposed by Medicare can take years to initiate. "Hundreds of Alzheimer's patients -- the majority of whom are Medicare beneficiaries -- are progressing each day from mild to moderate disease stages, where treatment may no longer be an option."

Harry Johns, CEO of the Alzheimer's Association, said in a statement: "With this approach, access to treatment would now only be available to a privileged few, those with access to research institutions, exacerbating and creating further health inequities."

Controversial from the start

The FDA's approval of Aduhelm in June raised many questions and concerns about the process, the drug's efficacy and its annual cost. Biogen initially priced it at about $56,000 a year.

The approval process has spurred investigations by several congressional committees and the FDA's inspector general.

It's also unclear how many patients will ultimately receive the medication. About a month after it initially approved Aduhelm, the FDA narrowed the group of patients who could receive it to those with mild cognitive impairment or milder states of the disease. Also, it's unknown how many doctors will prescribe it because of questions surrounding its results.

The approval was also a driving force behind a massive increase in Medicare Part B premiums for 2022, the agency said. The standard monthly payment soared to $170.10, up from $148.50 last year, for the more than 63 million enrollees.

About $10 of the premium spike is due to Aduhelm, a CMS official told CNN in November. The rest stems from a general increase in health care prices and usage, as well as from congressional action that limited the rise in Part B premiums for 2021 amid the coronavirus pandemic.

Even though Medicare had not yet decided whether it will cover the medication, its actuaries must make sure the program has sufficient funding in case it does.

If a million Medicare patients receive the drug at its original price, spending on Aduhelm would exceed $57 billion a year -- far surpassing spending on all other Part B-covered drugs combined, the Kaiser Family Foundation said in a June report. Also, that's roughly the same amount that Medicare paid for all hospital outpatient services in 2019.

Biogen's decision to drastically reduce the drug's price prompted Becerra to call for a reevaluation of Medicare Part B's 2022 premium.

"With the 50% price drop of Aduhelm on January 1, there is a compelling basis for CMS to reexamine the previous recommendation," he said in a statement.

Another saving: Utilization would likely be much lower if Medicare enrollees must participate in a clinical trial to obtain coverage.

The agency, which stressed that cost is not a factor in its coverage determination, said Tuesday it will announce further information on the reassessment when available.