Med schools are seeing historic high applications. Whether or not it's a 'Fauci effect,' it's much needed 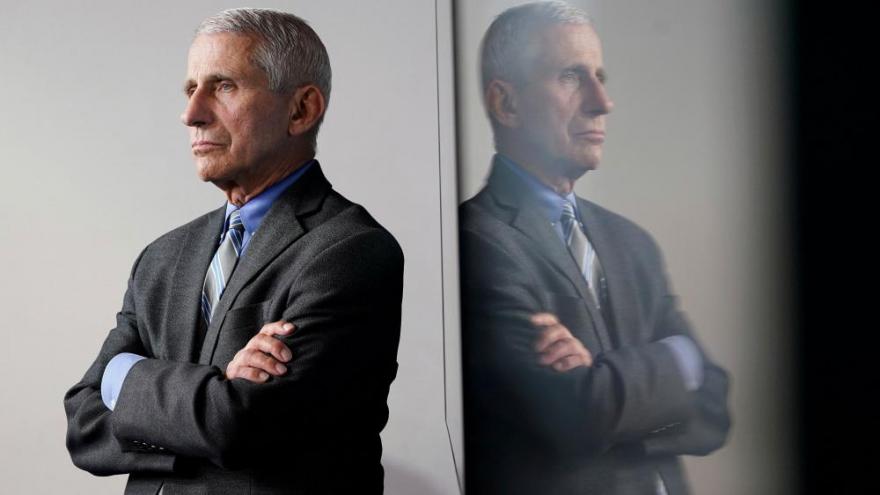 National Institute of Allergy and Infectious Diseases Director Dr. Anthony Fauci is reflected in a video monitor behind him on stage as he listens to the daily coronavirus task force briefing at the White House in April.

(CNN) -- Dr. Anthony Fauci has arguably become one of the most recognizable faces of 2020.

And the director of the National Institute of Allergy and Infectious Diseases may also be inspiring a new generation of aspiring doctors.

The number of students applying to medical school for the upcoming 2021 academic year is up by 18 % -- a huge spike compared to the previous year. It's also a record considering that the Association of American Medical Colleges usually sees an increase about 1 to 3 percent year over year.

"This kind of increase is unprecedented," said Geoffrey Young, the organization's senior director of student affairs and programs.

Informally, some med school officials are calling the spike the "Fauci Effect."

Just as the military saw a spike in enlistment after the 9/11 attacks, the motivating factor in this pandemic era could be the high regard Americans hold for health care professionals.

Chief among them is Dr. Anthony Fauci, one of the lead members of the White House's coronavirus task force , who has emerged as the face of America's pandemic response -- and a bona fide celebrity.

From bobbleheads to candles, people have been buying out memorabilia bearing Fauci's likeness. There are Fauci cupcakes and Fauci doughnuts. In July, he received the Robert F. Kennedy Human Rights award. Movie stars hold private Zoom calls with him.

Fauci isn't the only reason

But Young doesn't think Fauci is solely responsible for these numbers.

Young believes the term "Fauci effect" first gained popularity when he and a dean of admissions at Boston University spoke to NPR about it earlier this month. It stuck.

"'Fauci Effect' isn't something that we coined," Young said. "Medical school students typically work on their portfolios for medical school for many years, but I do think that the visibility of front line and essential workers this year may have presented the noble cause that physicians provide."

Young also thinks that the switch to virtual learning, and concern over the job market may have also led more people to decide to go back to school.

America is heading toward a doctor shortage

The spike could be coming at the perfect time. The US needs to produce more doctors, because the proportion of physicians is expected to drastically drop by the thousands in the next decade.

"The patient population is increasing because people are living longer," Young said. "But the baby boomer generation is approaching retirement age."

Physicians and surgeons are already stretched thin. But by 2025, there will be nearly 103,000 new openings for these positions and a shortage of 11,000 skilled professionals for these roles, according to a 2018 study.

The numbers will just grow from there.

While this next generation of doctors could help fix this shortage, it'll take more than increased applications.
Med schools typically admit a small percentage of those who apply. Young expects the number to be around 18 percent for 2021.

Also, medical schools struggle to admit diverse applicants. The number of Black and Hispanic doctors are both in the single digits, at 8 and 7 percent respectively, according to the AAMC, and overall, Young says accepted students tend to be from higher income brackets.

"The data is complicated," Young said. "But we are able to see that the people matriculating to med schools tend to come from those two upper quartiles of wealth."

That, however, is slowly changing.

"The preliminary review indicates that we are seeing some increase in historically underrepresented groups, not just race and sex, but also older students, disabled students and those from rural or LGBTQ backgrounds," Young said.

While this year's numbers are notable, don't expect to see the same with the class that applies next year.

Young says his organization expects those numbers to go back to the mean.

The "Fauci Effect" may be great, but alas, it's not forever.