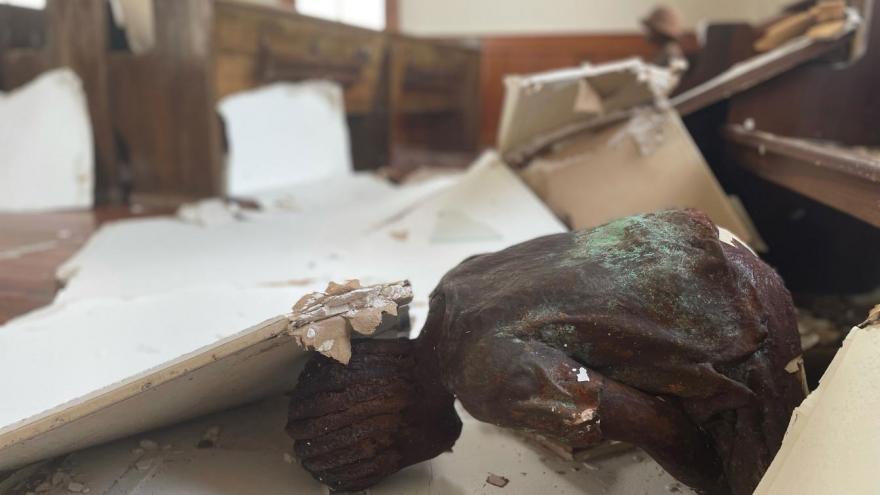 The church is filled with small statues called the "Children of Whitney." One of the statues fell off the pew during the storm, but it's believed to be restorable.

(CNN) -- Dennis Duplessis despised the nearly 100-foot oak tree that loomed over his house in Gonzales, Louisiana. For almost 10 years, he told his family he wanted to cut it down, but he couldn't afford the expense of a tree-cutting service.

On Sunday night, as Hurricane Ida started shredding its way through southeast Louisiana, the tree crashed down in his front yard and killed him. It crushed the top of a white truck that Duplessis had just stepped out of on the passenger side, and a broken branch severed an artery in his leg.

The storm had already knocked out power in the neighborhood. He never saw the tree falling in the total darkness and cascading rain surrounding him.

Duplessis' nephew, Caleb Marcantel, was in the driver's seat and pinned in the truck by the tree. Despite all odds, he climbed out with only a wound to his hand. He ran across the street to get his sister-in-law, a nurse, to help his uncle who was now bleeding out on the driveway.

Crystal Marcantel rushed outside with Caleb to put pressure on the leg while sustained winds of 115 miles per hour roared around them. She tried to stop the bleeding, but she knew the situation was dire. While comforted by his family members, Dennis Duplessis recited the Lord's Prayer, and then uttered his final words -- a message to his wife of more than 40 years.

"Tell Hope that I love her," he said, according to his daughter. He passed away within minutes and before paramedics could arrive.

Duplessis, 60, was the first confirmed fatality in the devastating storm system that's now killed dozens and left millions without power, water, or access to essential needs in the scorching summer heat. The storm left a path of destruction across a large portion of the United States, from Louisiana to New York.

"He always said he'd give his last breath for (his wife), and he wanted to go before her," said Duplessis' daughter, Chasity Fatherree. "He was out here trying to hook up the generator for her. And he went before her."

Four days after his death, Fatherree stood in her father's driveway while volunteers from nearby churches sawed away at the nearly giant tree that's still laying in their front yard, a reminder of the tragic accident that unfolded earlier this week.

"He hated that tree," Fatherree said.

"The what-ifs and the timing is all I can think about," she added. "I close my eyes and I just see the tree hitting him. It's just, it's horrible -- the tree that he hated."

No one expected the storm to carry so much strength as it moved inland from the gulf. By the time the storm hit Gonzales, which is about 67 miles northwest of New Orleans, it was still a Category 3 hurricane, after initially making landfall as a Category 4.

While Gonzales and the larger Baton Rouge area were spared the same devastation that struck other parts of Southeast Louisiana, it still tore down power lines and trees. In Ascension Parish, which includes Gonzales, nearly 26,000 customers were still without power as of Friday night, five days after the hurricane.

Storms like Ida change lives. The damage can't be measured solely by the physical destruction; storms also take symbols of the past.

Nearly 40 miles southeast of Gonzales, the Whitney Plantation in Edgard has become a historic museum that focuses on the experience of enslaved Africans. Joy Banner is a descendent of enslaved people and now works as the museum's communications director.

She lives in the area and sought shelter Sunday night in the plantation's mansion, which was built in 1791 by her ancestors. When the sun rose the next morning, she walked out to find the big house and the slave's former cabins were largely spared, but the historic church built by freed slaves after Emancipation was badly damaged. Some structures, like a century-old barn, were completely flattened. The beautiful white picket fence around the property was barely standing.

Banner said she believes much of the damage is restorable, but it could take months before they can reopen.

The fact that a 230-year-old building -- the mansion -- withstood the winds, she said, is a testament to the craftsmanship and skill of the slaves who built it.

"It's really an example of the amount of work and labor that went into laying the very foundations of our country. If that house was from 1791, can you imagine all the other buildings, structures, roads, part of the infrastructure that enslaved hands built that are still with us today and still holding up against Category 3 hurricanes?"

Another giant tree removed near the Duplessis' family home

Back in Gonzales, another towering tree was uprooted and leaning perilously close to Duplessis' home several days after the storm, causing more stress on a family that had already endured so much pain.

Family members put out a plea for help to get the tree taken down so that Duplessis' wife, Hope, could move back into her home after losing her husband.

Knowing it could fall at any moment, a company called "All About Trees" brought in cranes Thursday to take out the tree free of charge -- an undertaking that typically costs $10,000.

While his family will never escape the shadow of those two trees, the task of removing them -- an undertaking that Duplessis had endeavored for so long -- was, finally, finished.

Correction: A previous version of this story incorrectly characterized Crystal Marcantel's relationship to Caleb Marcantel. She is his sister-in-law.