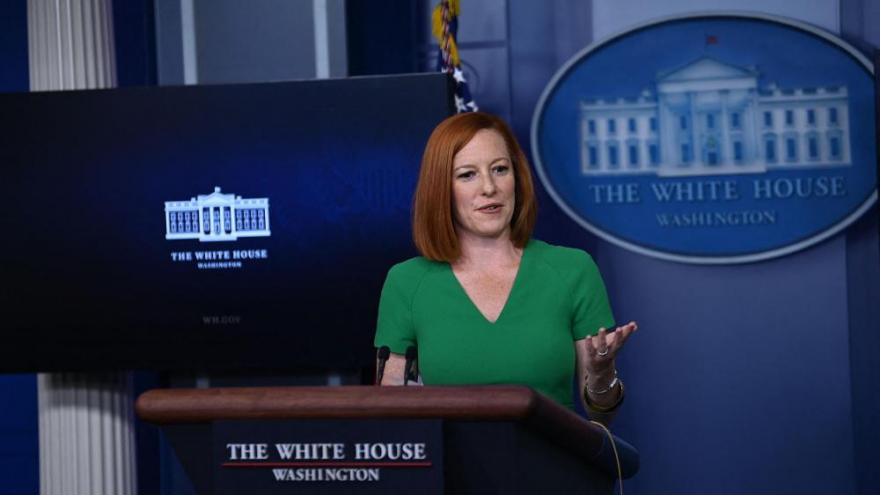 White House Press Secretary Jen Psaki, pictured here, on July 16, at the White House says Flights of Afghan refugees to the US were paused after four cases of measles were discovered among Afghans who had recently arrived in the country.

(CNN) -- Flights of Afghan refugees to the US were paused Friday after four cases of measles were discovered among Afghans who had recently arrived in the country.

The White House said the halt was recommended by the US Centers for Disease Control and Prevention after the four measles cases were diagnosed.

"Operation Allies Welcome flights into the United States have been temporarily paused at the request of the CDC and out of an abundance of caution because of four diagnosed cases of measles among Afghans who recently arrived in the United States," White House press secretary Jen Psaki told reporters.

She did not say where the cases were located. Flights of Afghans have been coming to the United States from military bases in Germany and Qatar. Many are operated by commercial carriers.

Fort McCoy, an army base in Wisconsin that has been taking in Afghan refugees, said in a statement Friday that "Operation Allies Welcome identified a single guest who had arrived" last Saturday and "who presented with symptoms consistent with measles." A measles diagnosis was confirmed the following day.

"Immediately following notification of the suspect case, the guest was placed in isolation and guests at risk of exposure were placed in quarantine. Post-exposure vaccination was also provided to those at risk and contact tracing was completed. Since the identification of the case, no other guests have been diagnosed with measles," the statement said.

Measles is a highly contagious virus that can lead to serious health complications. It was declared eliminated in the United States in 2000. However, travelers have continued to bring the virus to the United States, leading to local spread and outbreaks among people who aren't vaccinated.

Psaki said the individuals found to have measles were being quarantined in accordance with public health guidance and that contact tracing had begun. She said arriving Afghans were required to be vaccinated for measles as a condition for their entry into the United States.

The vaccine for measles, mumps and rubella is currently being administered to Afghans at military installations in the United States, Psaki said. She added the administration is exploring measures to vaccinate people at overseas locations.

Individuals are also being offered Covid-19 vaccines and tested for the virus.

The Biden administration continues to grapple with how it will safely vet and resettle thousands of people who fled the Taliban as it took over Afghanistan this summer.

Since August 17,?approximately 60,000?people have arrived in the US as part of Operation Allies Welcome, the Department of Homeland Security said Wednesday.

Of those arrivals, 11%?are US citizens?, 6% are US lawful permanent residents?, 83%?are other "Afghans at risk," including Special Immigrant Visa holders and other visa holders, SIV applicants, and others. The group also includes a small number of third country nationals that were also evacuated and processed, DHS said.

While Afghans are vetted before coming into the US, those who hurriedly departed the country without paperwork prompted additional screening and caused long delays.

There are currently more than 40,000 Afghans across eight military facilities in the US, with that number expected to grow as an increasing number of Afghans finish their screening overseas and are brought to the US.

The Department of Defense Inspector General is now evaluating the military's process for screening and tracking of Afghan evacuees this month, including individuals who are flagged as security risks.

The Pentagon last month also acknowledged unsanitary conditions at the Al Udeid Air Base in Qatar -- the base where the US military temporarily stationed thousands of evacuees from Afghanistan.