McDonald's is shutting down its Russian restaurants 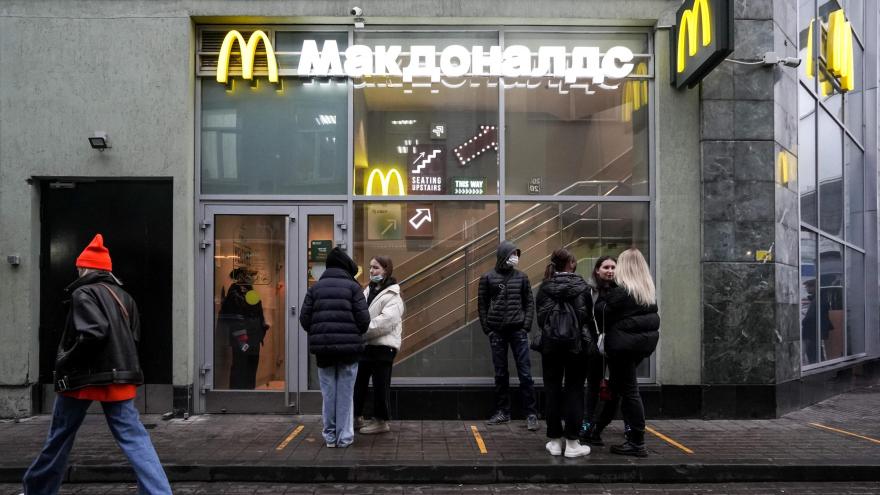 (CNN) -- McDonald's is temporarily closing its locations in Russia.

"McDonald's has decided to temporarily close all our restaurants in Russia and pause all operations in the market," CEO Chris Kempczinski said in a statement Tuesday.

There were 847 locations of McDonald's in Russia at the close of last year, according to an investor document.

"In Russia, we employ 62,000 people who have poured their heart and soul into our McDonald's brand to serve their communities. We work with hundreds of local, Russian suppliers and partners who produce the food for our menu and support our brand," Kempczinski said. "And we serve millions of Russian customers each day who count on McDonald's. In the thirty-plus years that McDonald's has operated in Russia, we've become an essential part of the 850 communities in which we operate."

But, he added, "at the same time, our values mean we cannot ignore the needless human suffering unfolding in Ukraine."

Several Western companies across multiple industries have halted operations in Russia after the country's attack on Ukraine.

Yet some big players in the food space are continuing to sell their products in the country.

Critics of Russia's actions are pressuring some of these brands to pull out of the country.

But there are a number of reasons for food companies to stay in Russia when so many other businesses are turning their backs. The supply chain can be more complex for food sellers than other industries. Many restaurant chains are operated by franchises, giving corporate owners less control. Beverage makers, like Coca-Cola, rely on regional bottlers and distributors to sell their products.

Proponents of the food industry remaining in Russia think they have a responsibility to stay, and fear the implications of such a move for Russian citizens, many of whom want nothing to do with the war.

Coca-Cola products are sold in Russia through independent bottler Coca-Cola Hellenic Bottling company. During a February 22 discussion of full year earnings results, Coca-Cola HBC CEO Zoran Bogdanovic pointed to Russia and Ukraine as an important driver of growth. "We've continued to drive strong performance in Nigeria, Russia and Ukraine, with all three now having volumes more than 20% above 2019," he said.

Coca-Cola HBC and Coca-Cola did not respond to requests for comment on their operations in Russia, but a statement from Bogdanovic appears on his company's website.

"Our thoughts are with all those affected, and we are doing everything we can to support our people, their families, and the humanitarian relief efforts in Ukraine and the region," he wrote, adding that along with Coca-Cola, his company has donated one million euros to the Red Cross in Ukraine, and is offering more support to neighboring countries and Ukrainian employees.

The letter doesn't mention Russia, however, or how the company is proceeding there.

In 2020, PepsiCo recorded about $3 billion in net sales in Russia. PepsiCo, did not immediately respond to a request for comment on its Russia operations.

Some people have strong opinions about how these companies should proceed.

Twitter users are employing #boycottCoke, and #boycottPepsi because of the companies' operations in Russia.

McDonald's was also under fire before its Tuesday announcement. Twitter users posted messages with #boycottMcDonalds, and the company was called out by New York State Comptroller Thomas DiNapoli.

Before McDonald's made its announcement, DiNapoli emailed a number of companies represented in the New York State Common Retirement Fund, including PepsiCo and McDonald's, urging them to stop doing business with Russia.

"Companies like McDonald's and PepsiCo, which have a large footprint in Russia, need to consider whether doing business in Russia is worth the risk during this extraordinarily volatile time," DiNaPoli said in a statement.

Danone, which makes Silk milk alternatives, Activia, Oikos yogurt, baby formula and more, has offered some insight into its operations in Russia.

In a LinkedIn post on Sunday, the company said it and its employees "express their solidarity with the people who are now suffering the atrocities of war," adding that it has "made a donation of 500,000 euros to the Red Cross."

The company detailed its plan for Russia.

"We have decided to suspend all investment projects in Russia," the company said, "but currently maintain our production and distribution of fresh dairy products and infant nutrition, to still meet the essential food needs of the local population."

The company also said that "this war could last for a long time. If so, it will lead to increasing difficulties for the population affected to get hold of basic goods."

Unilever made a similar statement this week, saying that "we will continue to supply our everyday essential food and hygiene products made in Russia to people in the country," adding "we will keep this under close review."

But the company noted it is has suspended imports of its products to Russia and is stopping all investment in the country, in addition to stopping exports from there. It said it won't profit from its presence in Russia.

Yum Brands, which owns KFC, Pizza Hut, Taco Bell and the Habit Grill, said in a statement that it "has suspended all investment and restaurant development in Russia."

The company added that it will "redirect all profits from operations in Russia to humanitarian efforts," in addition to making donations to the Red Cross through the Yum Brands Foundation. Yum has about 1,000 KFC restaurants and 50 Pizza Hut locations in Russia. The company said that most of these are operated by independent owners.

Farryl Bertmann, a registered dietician and senior lecturer in the nutrition and food sciences department at the University of Vermont, warned that if big food companies leave Russia the citizen population could suffer, even if they have other sources of food.

"I feel very strongly that people should be given the opportunity to purchase a variety of foods at different price points," she said. "That can only be successfully done if access is there."

Bertmann pointed out that Coke and Pepsi make more than just sugary sodas.

Coca-Cola sells water, juice, milk and other beverages. PepsiCo makes a number of non-soda beverages, and owns Quaker oats and snacks as well as other food brands.

"Ultimately, foods need to be made available," she said. "And I would be very concerned if the food environment [were] to dramatically change."