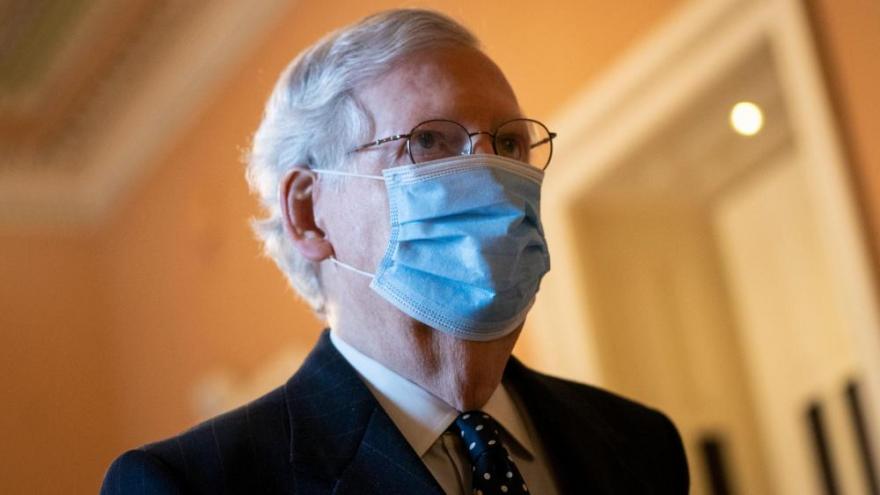 Senate Minority Leader Mitch McConnell has told his colleagues that he will vote to acquit former President Donald Trump of inciting the insurrection at the US Capitol last month, according to a source familiar with the conversations.

McConnell sharply criticized his former ally in a speech on the Senate floor shortly after Trump was cleared in a 57-43 vote, saying the rioters had been "fed wild falsehoods by the most powerful man on Earth. Because he was angry he'd lost an election."

"Former President Trump's actions that preceded the riot were a disgraceful, disgraceful dereliction of duty," added McConnell. "Trump is practically and morally responsible for provoking the events of the day."

But McConnell -- who, as Senate majority leader last month, rejected calls by Senate Democrats for a speedy trial during Trump's final days in office -- said Trump was constitutionally ineligible for conviction since the punishment is removal, and Trump was already out of office. McConnell claimed that a verdict before Joe Biden's inauguration had been impossible.

McConnell argued that "impeachment was never meant to be the final forum for American justice," but suggested Trump could be subject to criminal prosecution in the future.

"We have a criminal justice system in this country. We have civil litigation. And former Presidents are not immune from being held accountable by either one," he said.

House impeachment managers had asserted that there should not be a "January exception" for impeachment, contending that it's a crucial tool for Congress to hold the president accountable, and that the pro-Trump riot proved once again that the most dangerous time in a democracy is during the transfer of power. A conviction also would have led to a subsequent vote to disqualify Trump from holding public office again.

The typically tight-lipped Senate Republican leader rarely broke from Trump in his four years as president. But he led the Senate's certification of the presidential election that the rioters pledged to overturn, and strongly condemned the violence at the Capitol he has served in as a senator for 36 years.

He praised on Saturday the Senate for doing its constitutional duty in certifying the vote and said the Senate's decision "does not condone anything that happened on or before that terrible day."

House Speaker Nancy Pelosi blasted McConnell shortly after the acquittal vote, issuing a statement in which she said it was "pathetic that Senator McConnell kept the Senate shut down so that the Senate could not receive the Article of Impeachment and has used that as his excuse for not voting to convict Donald Trump."

In a 50-50 Senate, the House impeachment managers -- all of whom are Democrats -- needed to persuade 17 Republican senators to join every member of their party to convict Trump. Seven Republicans voted to convict, but the vote ultimately fell 10 votes shy of the needed two-thirds necessary.

Sen. Pat Toomey was one of those seven. Toomey, who is not running for reelection next year, rejected the arguments from the Trump defense team that the former President's conduct was protected under the First Amendment and that the trial itself was unconstitutional because he was out of office.

"No president, or anyone else, has the First Amendment right to incite a violent attack on our government," Toomey told reporters later Saturday.

The Pennsylvania Republican said there was "an overwhelming body of evidence that suggests" the trial was "constitutionally permissible," noting that the Constitution gives the Senate the "sole power to try all impeachments."

"Not only those impeachments of people who are still in office," he noted. "It doesn't say that."

House managers had attempted to tie Trump's words to the violence on January 6, when Congress worked to certify Biden's victory. They claimed the assault on the Capitol was the culmination of a months-long effort by Trump to prevent the election from being "stolen" from him.

House prosecutors showed clips of Trump's speech before the rampage, in which he urged his supporters to "fight like hell," "never give up" and "never concede." They've presented senators with videos of their colleagues fleeing a pro-Trump mob, which breached the US Capitol shouting "stop the steal." They showed the rioters searching for then-Vice President Mike Pence and House Speaker Nancy Pelosi and rummaging through the senators' desks on the chamber floor. Some of the Trump supporters were dressed in tactical gear, armed with zip-ties. Others held Trump 2020 flags, broke windows with poles and set up a gallows for Pence.

Democrats had hoped to convince McConnell in their closing arguments to flip his vote and move to convict Trump.

Rep. Joe Neguse, a Colorado Democrat, directly appealed to McConnell on Saturday without mentioning his name. Neguse quoted two Kentucky legends whom the Senate Republican leader admires, former Sens. Henry Clay and John Sherman Cooper, in thanking the Senate for the "courtesies" showed to the House managers over the past week and in praising the Senate for rising to the occasion in passing the 1964 Civil Rights Act.

He also hearkened back to McConnell's vote as a first-term senator in 1986 to override President Ronald Reagan's veto on legislation imposing economic pressure on South Africa during apartheid.

"There are moments that transcend party politics and that require us to put country above our party because the consequences of not doing so are just too great," Neguse said. "Senators, this is one of those moments."

But despite his pitch, and after witnessing the riot firsthand and being reminded of it again at the scene of the crime, McConnell and most Republican senators voted to acquit Trump. Many said they were concerned about the unprecedented nature of trying a former president in an impeachment trial.

They argued that Trump's words could be protected under the First Amendment, and pointed out that he also urged supporters in his January 6 speech "to peacefully and patriotically make your voices heard."

They also said the rioters should be held accountable for their actions but that the former President should not be convicted on the charge of inciting them.

Instead, McConnell laid the responsibility for the destruction squarely on Trump, saying he did not act swiftly enough to tell the mob to go home once they breached the Capitol.

"He did not do his job," McConnell said after Saturday's vote. "He didn't take steps so federal law could be faithfully executed and order restored. No. Instead, according to public reports, he watched television happily -- happily -- as the chaos unfolded."