McConnell vows to fully fund 9/11 victim fund, wonders why Jon Stewart is 'all bent out of shape' 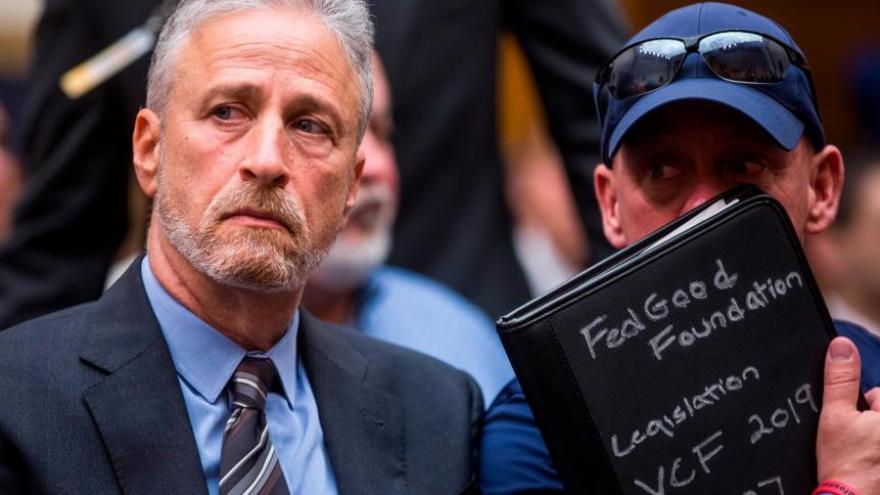 Senate Majority Leader Mitch McConnell strongly pushed back against Jon Stewart following the comedian's complaints that the senator has not dealt "compassionately" with the health problems 9/11 responders have faced in the years following the terrorist attack.

(CNN) -- Senate Majority Leader Mitch McConnell strongly pushed back Monday against Jon Stewart following the comedian's complaints that the senator has not dealt "compassionately" with the health problems 9/11 responders have faced in the years following the terrorist attack.

McConnell told Fox News he couldn't understand why Stewart is "all bent out of shape" on the issue and vowed the September 11th Victim Compensation Fund would be fully funded.

McConnell's aggressive response came after repeated attacks in recent days by Stewart on McConnell's handling of the issue, including on Sunday when Stewart told "Fox News Sunday" that McConnell has "always held out until the last minute" to approve funding and "only after intense lobbying and public shaming."

"Well, many things in Congress happen at the last minute. We never failed to address this issue and we will address it again," McConnell told Fox in a separate interview Monday. "I don't know why he is all bent out of shape. We will take care of the 9/11 compensation fund."

McConnell also knocked Stewart, who regularly and mercilessly attacked McConnell when he hosted" The Daily Show," for complaining last week that a House Judiciary Committee hearing where Stewart was testifying with 9/11 responders appeared half-empty.

"That frequently happens because members have a lot of things going on at the same time. It sounds to me like he is looking for some way to take office," McConnell said before reiterating "there is no way we won't address this problem appropriately."

The current law was renewed in 2015 and is set to expire in 2020, but the fund's administrator announced in February that there was insufficient funding to pay all claims. At the time of its last renewal, Congress appropriated $4.6 billion for the fund, bringing the total appropriated amount of the fund over the years to $7.4 billion. The new bill, which advanced out of committee last week, does not call for a specific amount of money but whatever sums necessary through 2090.

Senate Minority Leader Chuck Schumer has called on the Senate to immediately take up and pass the measure once it clears the House. Schumer defended Stewart on Monday in a tweet aimed at McConnell.

"Ease everyone's worthy concerns right now by committing to put the bill on the floor for a stand-alone vote as soon as the House passes it," Schumer wrote.

McConnell has not said when he would bring it up and his spokesman David Popp told CNN he didn't have any "timing guidance" ahead of House action.

House Majority Leader Steny Hoyer tweeted last week that the full House would vote on the measure before the chamber breaks for August recess.

"Now that @HouseJudiciary has passed H.R. 1327 to #Renew911VCF, I expect to bring it to the Floor for a vote before the August district work period," Hoyer tweeted. "First responders who ran into danger that day deserve certainty that they & their families will have the benefits they've earned."