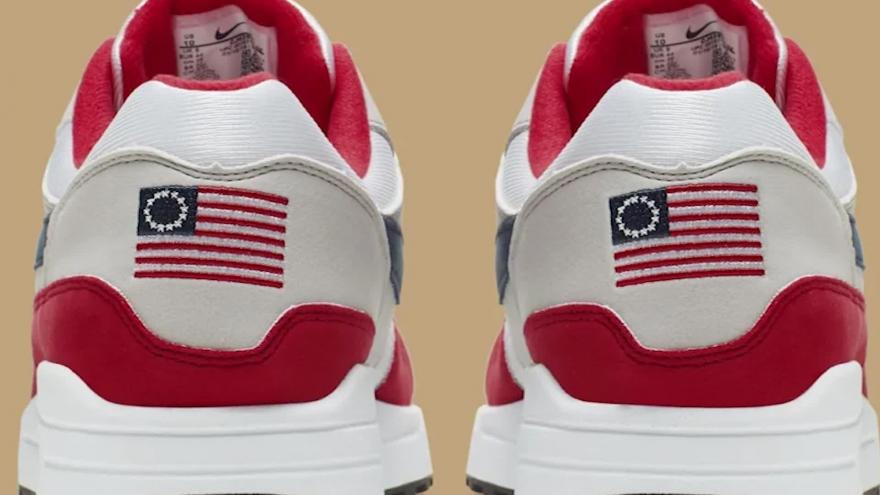 GOP Senate Majority Leader Mitch McConnell on Tuesday criticized Nike's decision to cancel a sneaker that featured the "Betsy Ross" version of the American flag amidst backlash over the company's use of the late 18th century design.

(CNN) -- GOP Senate Majority Leader Mitch McConnell on Tuesday criticized Nike's decision to cancel a sneaker that featured the "Betsy Ross" version of the American flag amidst backlash over the company's use of the late 18th century design.

"I read today that instead of celebrating the birth of our nation, a shoe company has deemed the flag, which flew during our Independence, too offensive ... too offensive to put on a pair of shoes," McConnell said at an event in Kentucky.

A Nike spokesperson told CNN that the company decided to halt distribution of the Air Max 1 Quick Strike Fourth of July shoe "based on concerns that it could unintentionally offend and detract from the nation's patriotic holiday."

McConnell said Tuesday that "If we're in a political environment where the American Flag has become controversial to Americans, I think we've got a problem."

McConnell said he hopes Nike either reneges its decision and releases the limited-edition shoe, or that a different designer picks up the idea and sells shoes featuring the same version of the flag.

The Wall Street Journal reported earlier that Nike delivered the sneakers to retailers, but asked stores to return them to Nike after the company received a complaint from former NFL star Colin Kaepernick, according to people familiar with the situation.

The Journal reported, based on those unnamed sources, that indicated Kaepernick said he and others found the flag offensive because it dates to periods of American history when African-Americans were enslaved. Kaepernick could not immediately be reached for comment.

Republican Gov. Doug Ducey of Arizona on Tuesday ordered a financial incentive package for Nike to be withdrawn because the company canceled the sneaker.

The shoe was set to be released Monday for $140, according to Sneakernews.com. The website included photos of a shoe that featured a version of the American flag with 13 stars organized in a circle and 13 stripes. That version of the flag, according to the Smithsonian, was used in the United States from 1777 to 1795.