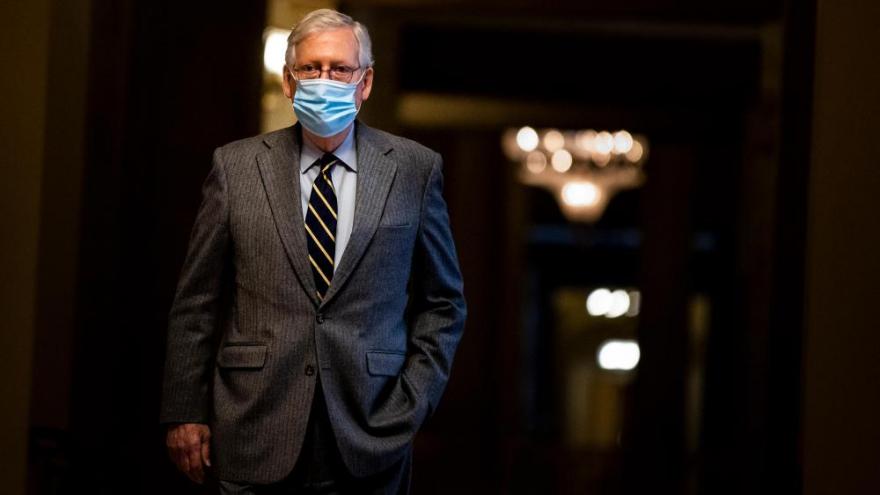 Senate Minority Leader Mitch McConnell, here heading to the floor of the Senate on January 26, said Thursday he would "absolutely" support former President Donald Trump if he became the GOP presidential nominee in 2024.

While McConnell maintained that the 2024 presidential election cycle would be a "wide-open race," when pressed by Fox News' Bret Baier about supporting Trump if he captured the Republican nomination, McConnell offered, "The nominee of the party? Absolutely."

The Kentucky Republican's comments come just weeks after he delivered a pointed rebuke of Trump on the Senate floor for fomenting the deadly US Capitol insurrection. Though McConnell voted to acquit Trump anyway, he called the former President's actions that preceded the riot "a disgraceful, disgraceful dereliction of duty."

"Trump is practically and morally responsible for provoking the events of the day," McConnell said as he suggested that the former President could be subject to criminal prosecution.

In response, Trump ripped McConnell in a lengthy statement, calling him "a dour, sullen, and unsmiling political hack."

"He will never do what needs to be done, or what is right for our Country. Where necessary and appropriate, I will back primary rivals who espouse Making America Great Again and our policy of America First. We want brilliant, strong, thoughtful, and compassionate leadership," Trump said.

Still, McConnell's comments on Thursday underscore the political reality that Trump remains overwhelmingly popular and there is little desire to cast him aside or move on to a new generation of leaders now that he is out of office.

Even Republicans who have most frequently resisted and condemned Trump -- including the party's 2012 presidential nominee, Utah Sen. Mitt Romney -- acknowledge that he remains the GOP's center of gravity, positioned to remain the party's standard-bearer if he decides to run for president again in 2024.

"I'm pretty sure he will win the nomination," Romney said Tuesday in an interview with The New York Times. "I look at the polls and the polls show that, among the names being floated as potential contenders in 2024, if you put President Trump in there among Republicans, he wins in a landslide."

In the latest sign of the party's enduring embrace of the former President, Trump is set to speak at the Conservative Political Action Conference in Orlando on Sunday. He plans to address "the future of the Republican Party and the conservative movement," a source familiar with Trump's plans previously told CNN.