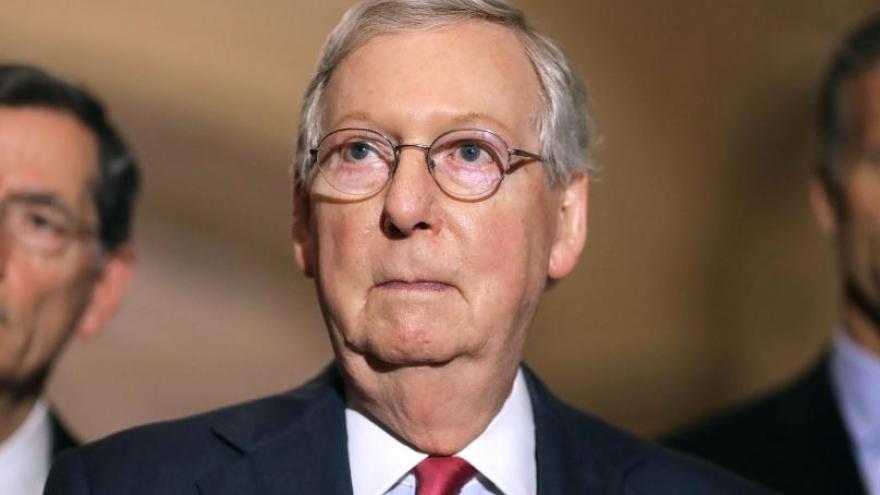 Senate Majority Leader Mitch McConnell said he will not put a gun bill of any kind on the Senate floor unless President Donald Trump says he would sign it into law.

(CNN) -- Senate Majority Leader Mitch McConnell said Tuesday he will not put a gun bill of any kind on the Senate floor unless President Donald Trump says he would sign it into law.

Days after a West Texas mass shooting that killed at least seven people, the Kentucky Republican said on "The Hugh Hewitt Show" he expects to get an answer from the Trump administration within the next week on what, if anything, it is prepared to support.

"If the President is in favor of a number of things that he has discussed openly and publicly, and I know that if we pass it, it will become law, I'll put it on the floor," McConnell said on the radio show.

McConnell has for months blocked nearly every piece of legislation passed by the Democratic-led House, including gun measures popular with the public that enjoy bipartisan support on Capitol Hill. In the wake of a string of mass shootings that have rocked the nation, frustrated Democrats have been mounting a push against McConnell and Republican leadership to take up gun legislation.

In previous comments, Trump has not made clear what kind of measure he would support, which could help explain McConnell's hesitance to say he will put something on the floor unless Trump declares he would sign it. Trump said background checks would not have stopped the mass shootings that have roiled the US over the past few years, and declared the US's gun violence problem a mental health issue.

The Trump administration is preparing a package of legislative measures, aides said Monday. The package will include legislation that would expedite the death penalty for people found guilty of mass killings, Vice President Mike Pence's chief of staff told reporters. Other potential steps include so-called red flag laws, which seek to prevent mentally ill people from getting guns.

Trump expressed openness to expand background checks after the Dayton and El Paso shootings but backed off under pressure from the National Rifle Association.

"I said a few weeks ago that if the President took a position on a bill so that we knew we would actually be making a law and not just having serial votes, I would be happy to put it on the floor and the administration is in the process of studying what they are prepared to support if anything," McConnell said on the radio program.

Many of McConnell's rank-and-file members are strong supporters of the Second Amendment and don't want to make any major changes to the nation's gun laws, especially when they think mental health problems are the cause. That's why they are more open to "red flag" laws -- which would allow guns to be taken away through a court order from a person in crisis -- than legislation that passed the House to toughen background checks.

Texas Republican Sen. Ted Cruz, whose state witnessed two massacres over the past month, sidestepped questions Tuesday on whether he'd get behind a bill to mandate universal background checks on gun sales. Instead, Cruz told reporters the Senate should pass an alternative GOP bill that he cosponsored with Republican Sen. Chuck Grassley that would increase resources for prosecuting gun crimes, such as trafficking and straw purchases. The bill would seek to bolster accurate reporting from agencies and institutions to the National Instant Criminal Background Check system.

"I've introduced legislation strengthening the federal background check system -- Grassley-Cruz -- and we need to pass Grassley-Cruz," Cruz he when asked by CNN if he'd support universal background checks. He was in town Tuesday to preside over a brief, pro-forma session of the Senate where no business was conducted.

McConnell also doesn't want to cave to pressure from Democrats to take a series of votes on gun control measures that could be politically tricky for GOP senators -- especially those up for reelection -- unless Trump says he supports the proposals.

The House in February passed significant gun control legislation for the first time in more than two decades. The universal background check bill, H.R. 8, requires background checks on all firearm sales in the country. The chamber also passed legislation aimed at closing a gap in the background check system that allowed a man to purchase a gun and kill nine members of a Charleston, South Carolina, church in 2015.

The Kentucky Republican has previously referred to himself as the "Grim Reaper" for "killing" what he calls the Democrats' "socialist agenda." He has blocked legislation that addresses election security, protections for people with preexisting health conditions and people brought to the country as undocumented children and a new system of universal background checks for gun purchases.

McConnell told a Kentucky radio station in August the Senate will put the issues of background check legislation in addition to "red flag" laws "front and center" when the body reconvenes after its summer recess. He made no commitments what would come to the Senate floor, but specifically mentioned as possible options under consideration a background checks measure jointly sponsored by Democrat Sen. Joe Manchin of West Virginia and Republican Sen. Pat Toomey of Pennsylvania. He also noted Sens. Lindsey Graham of South Carolina and Richard Blumenthal of Connecticut efforts on "red flag" laws.

McConnell also said his conference would vote to fill any Supreme Court vacancy that could occur before the 2020 elections. He criticized Democrats saying they can "whine" about it all they want, contending the precedent is to not confirm a Supreme Court nominee in a presidential election year when the Senate is controlled by the opposite party.