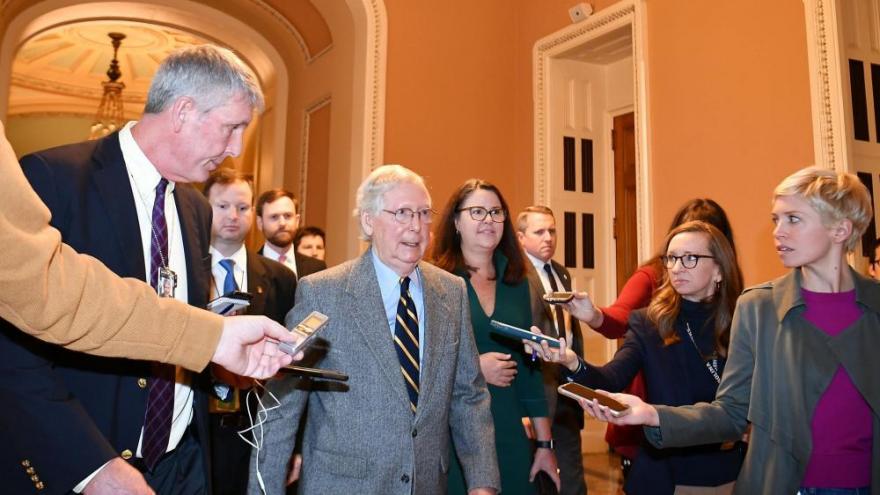 Senate Majority Leader Mitch McConnell appears to have the votes to set the ground rules of the impeachment trial for President Donald Trump -- without Democrats' support, according to Republican senators.

(CNN) -- Senate Majority Leader Mitch McConnell said Tuesday that he has the votes to set the ground rules of the impeachment trial for President Donald Trump -- without Democrats' support.

McConnell first made the remarks during a closed-door lunch with his fellow Republican senators on Capitol Hill, an official in the room told CNN, before McConnell made the announcement publicly during a news conference following the lunch. McConnell made clear he had no plans to move forward on a trial until the two articles of impeachment are sent to the Senate, as he has said publicly.

"We have the votes once the impeachment trial has begun to pass a resolution essentially the same, very similar to the 100-to-nothing vote in the Clinton trial, which sets up what's best described as a phase one," McConnell said Tuesday.

All McConnell needs is 51 senators -- or a simple majority of the 100-member chamber -- to vote to approve those ground rules. Sens. Susan Collins of Maine, Lisa Murkowski of Alaska and Mitt Romney of Utah have said they back the leader's approach.

This is different than the Senate trial for then-President Bill Clinton in 1999, when the ground rules were set by a 100-0 vote. This time it will likely be approved on a party-line vote.

Democrats want a deal up front to hear from witnesses and get documents, but McConnell says those matters should be dealt with later after opening statements.

Republicans won't act until they get the two articles of impeachment from the House. Speaker Nancy Pelosi has held on to them since they were voted on in the House in December.

"It continues to be my hope that the speaker will send them on over," McConnell said Tuesday at his news conference.

Romney said earlier Tuesday that he backs McConnell's proposal to move forward and deal with witnesses later in the process.

"I'm comfortable with that," Romney said.

He reiterated he wants witnesses to testify but said it can be dealt with later in the trial.

"Certainly I'd like to see a process that allows for us to call witnesses," Romney said.

When asked if he has any concerns with McConnell coordinating with the White House on the impeachment trial, Romney said, "I'm sure the leader will provide impartial justice."

Two sources say McConnell and his deputies are moving to lock in the whip count during the closed-door GOP policy lunch on Tuesday in preparation for whenever the articles are transmitted to the Senate.

At this point no final decisions have been made, but as has been clear for weeks, the impasse between McConnell and Democratic Leader Chuck Schumer over witnesses appears as intractable as ever.

There is still no clarity on when Pelosi will set up votes to appoint managers and transmit the articles of impeachment to the Senate. Several news stories highlighting new elements of the Ukraine allegations and, most notably, former national security adviser John Bolton's willingness to testify if subpoenaed, served to validate the decision to hold onto the articles for a period.

Still, even some Democrats in the Senate have signaled they're ready for the articles to come to the chamber. Democratic Sen. Doug Jones of Alabama, who is up for reelection in 2020, indicated he is ready to begin the trial.

"I'm hoping they will come over here soon," Jones told CNN. "I think most people are ready to get moving on this."

The Democratic senator said "what concerns me more" is the GOP refusal to allow witnesses to come forward and "that we need to able to fill in gaps."

He also explained why he wants to hear from Bolton.

"We have under oath testimony, in which John Bolton purportedly said that all of the stuff involving Ukraine was a drug deal," Jones told CNN. "Now that has sinister and corrupt connotations to everyone in America. Did he say it? If he did, what did he mean? I think every US senator wants to hear the answer to that right now. And we want to know what was said, what was not done. We need to have first-hand knowledge from witnesses who have first-hand knowledge."