McConnell: Marjorie Taylor Greene's views are a 'cancer' for the GOP 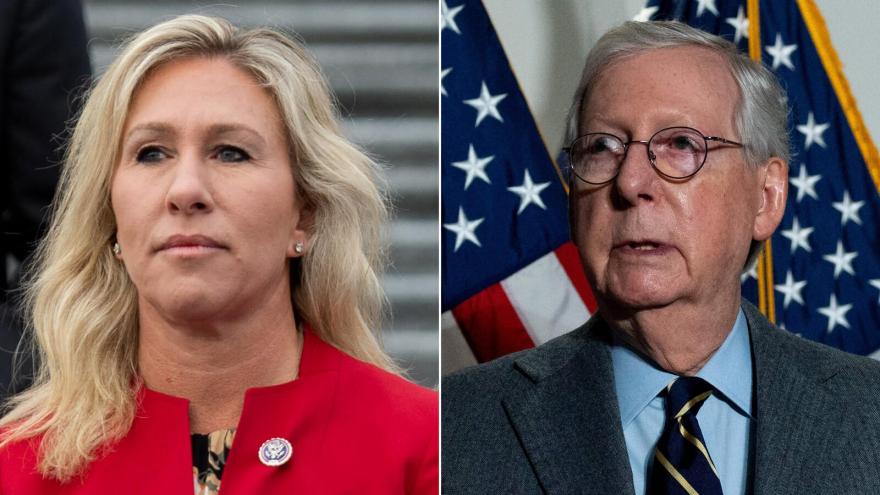 "Loony lies and conspiracy theories are cancer for the Republican Party and our country," McConnell said in a statement. "Somebody who's suggested that perhaps no airplane hit the Pentagon on 9/11, that horrifying school shootings were pre-staged, and that the Clintons crashed JFK Jr.'s airplane is not living in reality. This has nothing to do with the challenges facing American families or the robust debates on substance that can strengthen our party."

While McConnell did not name Greene directly, his statement stands as a scathing rebuke of the freshman Republican House member. The Hill first reported on the statement.

Greene quickly shot back on Twitter, asserting that "the real cancer for the Republican Party is weak Republicans who only know how to lose gracefully. This is why we are losing our country."

Greene has faced backlash since a CNN KFile report last week found that she had repeatedly indicated support for executing prominent Democratic politicians in 2018 and 2019 before being elected to Congress. Amid an uproar over her past comments, video of Greene confronting Parkland shooting survivor David Hogg before she was elected went viral Wednesday.

The freshman congresswoman has a track record of incendiary rhetoric, including past comments using Islamophobic and anti-Semitic tropes, as well as ties to the baseless and thoroughly debunked QAnon conspiracy theory.

Greene now faces potentially serious consequences in light of her prior comments, with House Democrats moving expeditiously to remove her from her committee assignments.

House Majority Leader Steny Hoyer of Maryland, the No. 2 House Democrat, is planning to deliver an ultimatum on Greene to House GOP leader Kevin McCarthy of California this week, a source familiar tells CNN. Hoyer is expected to tell McCarthy that Republicans have 72 hours to strip Greene of her committee assignments or Democrats will bring the issue to the House floor.

CNN previously reported that McCarthy is slated to meet with Greene this week, as many House Republicans have been silent about her newly resurfaced incendiary comments.

McConnell's short but pointed rebuke Monday night came the same day the Kentucky Republican waded publicly into another controversy threatening party unity. In a separate statement to CNN, he expressed support for Republican Rep. Liz Cheney's vote to impeach President Donald Trump as some Trump loyalists seek to remove her from leadership.

In the cases of Cheney and Greene, the Senate minority leader appears to break with the former President. Greene announced Saturday that she had spoken with Trump amid calls for her expulsion from Congress, saying she was grateful for his support and will "never apologize" as she faces backlash.