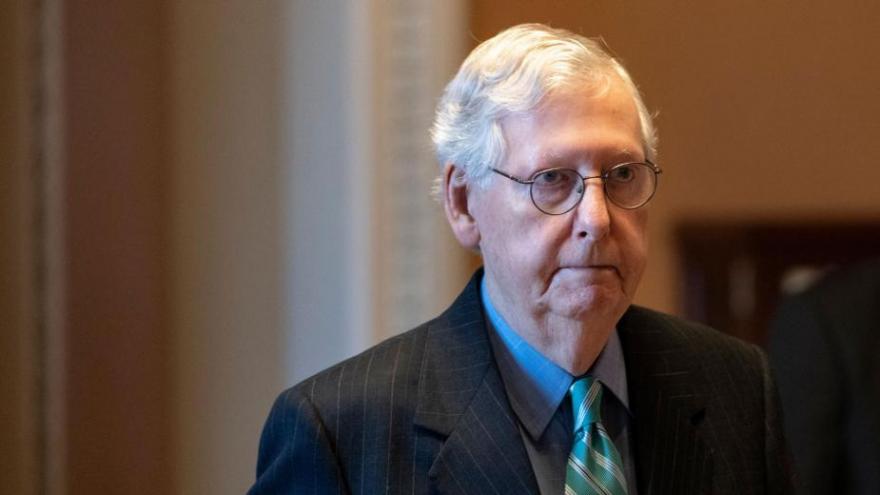 Senate Republican leader Mitch McConnell told Attorney General Merrick Garland that parents "absolutely should be telling" local schools what to teach amid a debate over mask and vaccine mandates, the role of racial equity education and transgender rights in schools that has become a flash point ahead of the 2022 midterms.

(CNN) -- Senate Republican leader Mitch McConnell on Saturday told Attorney General Merrick Garland that parents "absolutely should be telling" local schools what to teach amid a debate over mask and vaccine mandates, the role of racial equity education and transgender rights in schools that has become a flash point ahead of the 2022 midterms.

"Parents absolutely should be telling their local schools what to teach. This is the very basis of representative government," McConnell, a Kentucky Republican, wrote in a letter. "They do this both in elections and -- as protected by the First Amendment of the Constitution -- while petitioning their government for redress of grievance. Telling elected officials they're wrong is democracy, not intimidation."

The letter from the Senate Minority Leader comes in response to a Justice Department effort to address the increase in harassment, intimidation and threats of violence against school board members, teachers and workers in public schools. Earlier this week, Garland directed the FBI and US attorneys' offices to meet with federal, state and local law enforcement leaders "to discuss strategies for addressing this disturbing trend," the department said in a news release.

"Threats against public servants are not only illegal, they run counter to our nation's core values," Garland wrote in a memo about the directive. "Those who dedicate their time and energy to ensuring that our children receive a proper education in a safe environment deserve to be able to do their work without fear for their safety."

The National School Boards Association had asked the Biden administration for assistance in dealing with threats against educators for approving mask policies aimed at protecting against Covid-19 and threats over false "propaganda" about critical race theory being taught in classrooms even though that "remains a complex law school and graduate school subject well beyond the scope of a K-12 class."

Still, Republicans are using talking points similar to McConnell's ahead of the 2022 contests and members of the party have already sought to harness the recent Republican focus on education issues in the Virginia governor's race.

Virginia Republican gubernatorial nominee Glenn Youngkin quickly turned a comment on the matter by Democratic opponent Terry McAuliffe into an attack ad aimed at invigorating base GOP voters and parents ahead of the November election.

The moment came during the second and final debate between the two late last month. "I'm not going to let parents come into schools and actually take books out and make their own decision," McAuliffe said over what should be taught in schools. The former governor later added, "I don't think parents should be telling schools what they should teach."

The comments, after getting considerable pick up within conservative media, quickly became a Youngkin ad and have already become a staple of Youngkin's pitch in the closing weeks of the race to lead the Commonwealth.