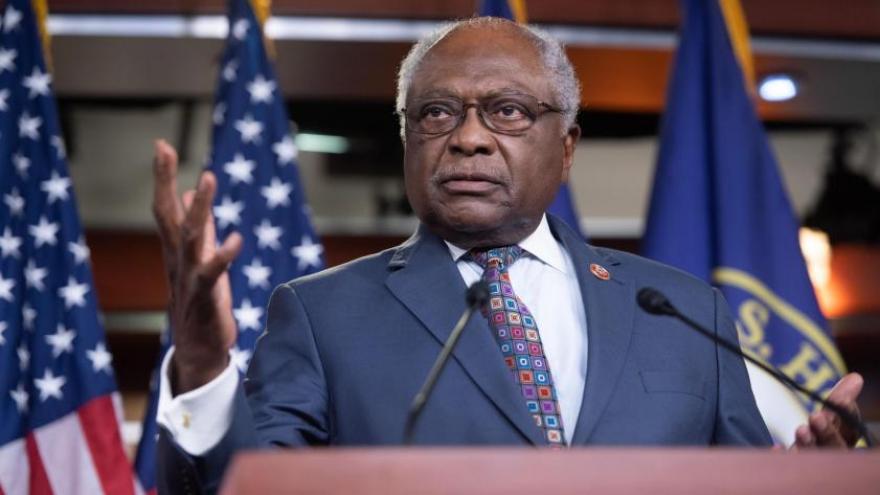 House Majority Whip Jim Clyburn said that the "window is closing" on a potential deal for a stimulus package, as House Speaker Nancy Pelosi's deadline arrives for Democrats and the Trump administration to resolve policy differences if they want to pass a bill before Election Day.

(CNN) -- House Speaker Nancy Pelosi and Treasury Secretary Steven Mnuchin engaged in fast-paced negotiations on Tuesday to cut a deal on a major relief package that could pass before Election Day -- but Senate Republicans continued to throw cold water on any deal with the enormous price tag envisioned by Democrats and President Donald Trump.

After speaking for 45 minutes on Tuesday afternoon, the two planned to resume talks on Wednesday as they tried to continue to hash out their differences on a range of matters, including funding for state and local governments, jobless benefits, funding for schools and liability protections for businesses -- among other matters.

While Pelosi and her aides sounded upbeat about the progress in the talks, time is running short, meaning it's growing more likely that any proposal would likely get voted on after the elections during a lame-duck session of Congress.

Pelosi said Tuesday that the two sides are close to resolving a key sticking point over money for coronavirus testing and contact tracing, an issue that had divided the two sides for weeks. But despite the positive assessment, there are still plenty of obstacles to overcome before any deal can become law.

In a Dear Colleague Letter to her caucus after Tuesday's negotiations, Pelosi said that both sides are "serious" about reaching a compromise and that their conversation "provided more clarity."

"Our conversation provided more clarity and common ground as we move closer to an agreement," Pelosi wrote in the letter. "Today's deadline enabled us to see that decisions could be reached and language could be exchanged, demonstrating that both sides are serious about finding a compromise."

Senate Republicans, however, are raising concerns about the direction of the talks.

At a closed-door lunch on Tuesday, Senate Majority Leader Mitch McConnell indicated that the deal was unlikely to get a vote in his chamber before Election Day, according to multiple sources, and he said he warned the White House against getting behind such a proposal before November 3 that would badly divide Senate Republicans.

Sources familiar with McConnell's remarks said the majority leader described how hard it would be logistically to get a bill done so quickly before the election, given all the legislative hurdles that need to be overcome, and as Republican senators are eager to campaign.

Most of the Republican senators are pushing back over the size of a deal and aren't comfortable with anything in the neighborhood of $1.8 trillion to $2 trillion, which is similar to the price tag the White House offered Pelosi earlier this month.

Still, McConnell said publicly Tuesday that if such a deal is reached between Pelosi and Mnuchin, and is supported by Trump, he would put bill on the floor for a vote. But he did not indicate a time frame for doing so, and many believe any deal would ultimately slip until after the election into a lame-duck session of Congress.

"We would put it on the floor of the Senate and let the Senate consider it," McConnell told reporters after the lunch.

Moreover, McConnell -- who is pushing a $500 billion bill that Republican senators are mostly united behind -- would not say if he was comfortable with a price tag around $1.8 trillion or $2 trillion as Trump is pushing. And it's unclear if the package has the 60 votes it would need to advance in the Republican-controlled chamber.

With pushback growing across the Capitol, Mnuchin and Pelosi spoke Tuesday afternoon by phone about whether they could resolve differences that have lingered for months.

After speaking to Mnuchin, Pelosi told reporters on Capitol Hill "I hope so," when asked if a deal could be reached by the end of the week, coming as news of Republican opposition to a large deal surfaced later Tuesday.

Pelosi said Sunday that she and Mnuchin must reach an agreement by end of the day Tuesday, the last feasible date to get a bill passed through both chambers of Congress by November 3. The two sides have been divided for months on the topline figure as well as what should be in the bill.

Pelosi on Tuesday, however, projected optimism that Democrats could strike a deal and downplayed her deadline for an agreement prior to the election.

She said that Tuesday wasn't her intended day to reach a deal with the Trump administration, but the "day where we would have our terms on the table to be able to go to the next step."

"We all want to get an agreement because people need it. It's urgent, and our economy needs it," the California Democrat said. "Hopefully by the end of the day today, we'll know where we all are."

Other top Democrats are uncertain a deal can be reached.

House Majority Whip Jim Clyburn said Tuesday that the "window is closing" on a potential deal for a stimulus package.

"We are going to do what's fair. That's what we want to see done. And we are not just going to take anything simply because it'll be something," he said.

Asked when Americans could expect relief amid the coronavirus pandemic if a deal isn't reached now, Clyburn replied, "When we change this administration."

After calling off talks while he was recovering from coronavirus earlier this month, Trump abruptly reversed course and pushed lawmakers to pass a massive new spending package.

During an interview with Fox News on Tuesday, Trump repeated that he wants a "bigger" stimulus package than even Democrats are proposing — despite Senate Republicans saying they doubt Pelosi and Mnuchin can reach a deal that they'd support.

Trump claimed McConnell will "be on board if something comes," despite no indication from the Republican leaders that he would be supportive. Earlier this month, Republican senators blasted a $1.8 trillion offer made by the Trump administration to the Democrats as too big, an offer Pelosi dismissed as "insufficient."

In a test of competing proposals, a vote McConnell called Tuesday related to a standalone bill to extend the Paycheck Protection Program garnered a handful of Democratic votes but fell short of the 60 votes it would ultimately need to be adopted. And a separate vote pushed by Democrats on a House-passed comprehensive stimulus bill fell short of a majority.

The Senate is set to vote Wednesday on a roughly $500 billion proposal, similar to one Democrats rejected this summer. It's also expected to fail.