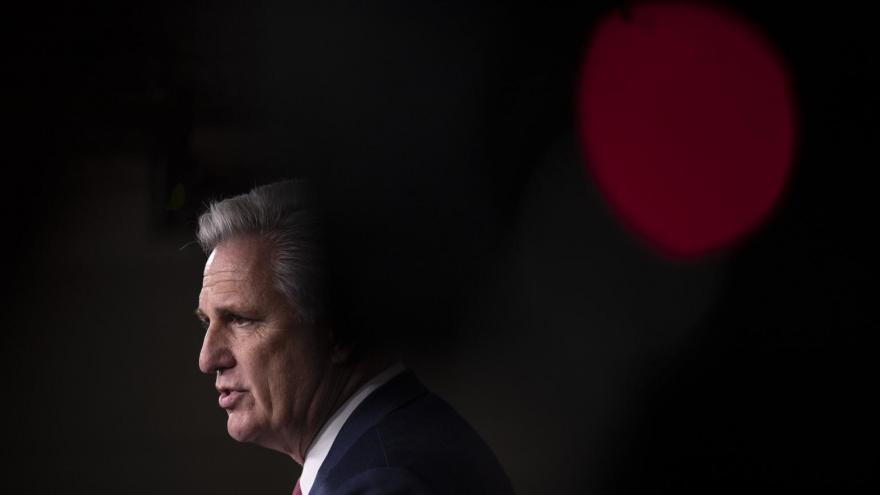 (CNN) -- The top House Republican has quietly blessed an effort by conservative lawmakers to overturn President-elect Joe Biden's victory when a joint session of Congress meets later this week, even as other top congressional Republicans are raising alarms that the push could cause lasting damage to a pillar of democracy.

The conservatives said on Sunday that House Minority Leader Kevin McCarthy has been supportive of their plans, a stark contrast from the position of many prominent Republicans — including Senate Majority Leader Mitch McConnell, Wyoming Rep. Liz Cheney and the former House speaker, Paul Ryan -- who have publicly and privately raised major concerns about an effort that is doomed to fail but is bound to sow distrust over the sanctity of US elections.

The internecine fight, which will play out on Wednesday when a joint session of Congress meets to affirm Biden's Electoral College win, has turned into a loyalty test of sorts to President Donald Trump who has launched an unprecedented campaign to subvert the will of voters by making unsubstantiated claims of a rigged election that have been rejected by courts across the country.

McCarthy, who has yet to acknowledge Biden's victory and has said little publicly about the challenge, has joined two GOP conference calls in recent days during which the January 6 battle has been a subject of debate, including one on Saturday night and another on New Year's Day.

On the New Year's Day call, some members pressed McCarthy to specify his position, according to a person with knowledge of the call.

On Sunday, several of those conservatives said there's little doubt where McCarthy stands.

"Kevin McCarthy's part of the team," said Rep. Mo Brooks, Republican from Alabama who is leading the charge, adding that the California Republican has "told that to the President of the United States" as well as Ohio Rep. Jim Jordan.

Asked for comment, a McCarthy spokesman referred a reporter to comments the GOP leader made Saturday night on Fox News where he welcomed an audit into the election results, something that 11 GOP senators called for on Saturday before agreeing on whether to vote to affirm Biden's win.

"If you want to unite this nation, you start with having integrity in your election," McCarthy said. "There are questions out there. ... What's wrong with bringing the information back so people have all the information to make those decisions?"

Yet with GOP court challenges failing across the country, states certifying the results and the Electoral College voting to make Biden's win official, some of McCarthy's deputies and many Senate Republicans say joining Trump to mount a baseless campaign against the election will only hurt faith in democracy.

On the New Year's Day call, Cheney, the No. 3 House Republican, made clear her distaste for the push, multiple sources told CNN.

Cheney told House Republicans that voting on the election is more consequential than any other vote -- including votes to authorize war, according to two sources. She also argued that nothing in the Constitution supports the notion that Congress can substitute its views for voters in those states selecting the next President.

In a 21-page memo sent to Republicans on Sunday, Cheney argued that objecting to the Electoral College count is unconstitutional and sets an "exceptionally dangerous precedent."

"As you will see, there is substantial reason for concern about the precedent Congressional objections will set here. By objecting to electoral slates, members are unavoidably asserting that Congress has the authority to overturn elections and overrule state and federal courts," she wrote. "Such objections set an exceptionally dangerous precedent, threatening to steal states' explicit constitutional responsibility for choosing the President and bestowing it instead on Congress. This is directly at odds with the Constitution's clear text and our core beliefs as Republicans."

Also on Sunday, a group of seven other House Republicans said in a joint statement that they also do not support their colleagues objecting to the certification of Electoral College votes this week because it is the responsibility of the states to choose electors, not Congress. They did not dismiss allegations of voter fraud, but pointed to "the narrow role" Congress has in the presidential election process.

"We must respect the states' authority here. Though doing so may frustrate our immediate political objectives, we have sworn an oath to promote the Constitution above our policy goals. We must count the electoral votes submitted by the states," wrote the group, which included Reps. Thomas Massie of Kentucky, Kelly Armstrong of North Dakota, Ken Buck of Colorado, Mike Gallagher of Wisconsin, Tom McClintock of California and Chip Roy of Texas and Rep.-elect Nancy Mace of South Carolina.

While the effort is certain to fail, it's bound to put Republicans in a difficult spot. If one senator joins with a House member to object to a state's electoral count, each chamber must debate the merits of the objection for up to two hours before casting a vote on whether to affirm the objection. The objections are certain to fail in both chambers, even though they could win the backing of a majority of House Republicans.

Cheney's argument has been echoed by a number of top Republicans, including McConnell and his deputies, as well as the party's 2012 presidential nominee, Sen. Mitt Romney of Utah.

Ryan sided with his 2012 runningmate Sunday. "Efforts to reject the votes of the Electoral College and sow doubt about Joe Biden's victory strike at the foundation of our republic," the former speaker said in a statement. "It is difficult to conceive of a more anti-democratic and anti-conservative act than a federal intervention to overturn the results of state-certified elections and disenfranchise millions of Americans. The fact that this effort will fail does not mean it will not do significant damage to American democracy."

Others made clear they want their colleagues to drop the effort.

"I like to come up with plans that have a chance of being successful," said Sen. Roy Blunt, a member of the Senate GOP leadership team.

Sen. Dan Sullivan, a Trump ally who just won reelection in Alaska, said he would "listen to" the arguments, but is "very dubious."

Yet at least a dozen Senate Republicans, including four incoming freshmen, are indicating they plan to vote against certifying the election results, arguing instead there needs to a commission to probe potential voter fraud, even as courts have turned back dozens of challenges by Trump and his allies about the election results since November 3.

Sen. Tommy Tuberville, the incoming Alabama freshman who also is part of the effort, claimed he had "not lately" spoken to Trump about the challenge and said "no," he hadn't spoken with McConnell, either. He declined to address criticism he's received from the effort, which is opposed by the senior Alabama senator, Republican Richard Shelby.

"I'm on the other side of that," Shelby said when asked if he would join Tuberville. "It's time to move on."

Trump's staunchest defenders are plotting to object to six states' election results, something that could extend floor debate through the day on Wednesday and into Thursday.

But even after Trump loses the votes, his closest allies say he still shouldn't concede the race where the result has been clear for nearly two months.

"Absolutely not," Brooks said when asked if Trump should concede after the joint session affirms Biden's victory. "There's no question at all in my mind that, if we were to only count lawful votes cast by eligible American citizens, Donald Trump won the Electoral College. Under those circumstances you should never concede because you didn't lose. It was stolen."