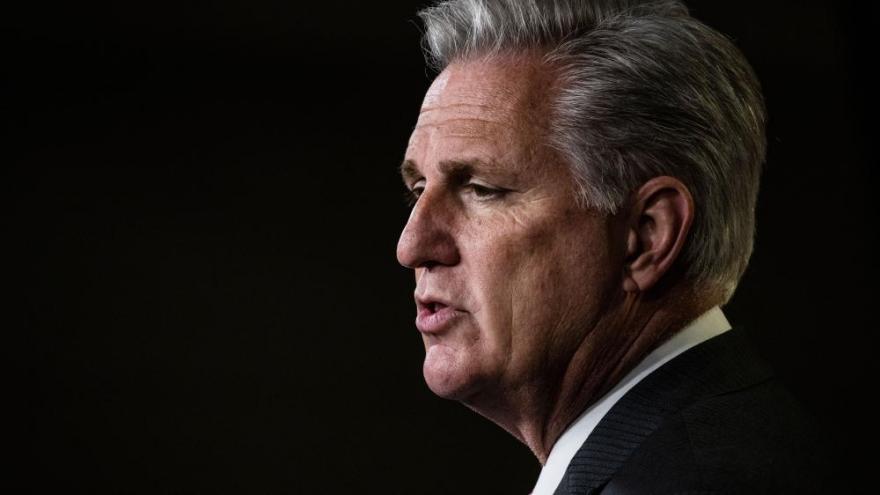 House Minority Leader Kevin McCarthy confirmed on Sunday that he backs Rep. Elise Stefanik for the role of House Republican conference chair, as Rep. Liz Cheney faces a vote to oust her from the influential GOP leadership post.

(CNN) -- House Minority Leader Kevin McCarthy confirmed on Sunday that he backs Rep. Elise Stefanik for the role of House Republican conference chair, as Rep. Liz Cheney faces a vote to oust her from the influential GOP leadership post.

"Yes, I do," McCarthy told Fox News' Maria Bartiromo when asked if he supports the New York Republican for the No. 3 role in the House Republican conference. Stefanik thanked McCarthy for his support in a tweet later Sunday.

CNN reported last week that McCarthy has been privately supporting Stefanik to replace Cheney, and the No. 2 member of House Republican leadership, Rep. Steve Scalise, publicly endorsed Stefanik's bid for the job on Tuesday.

Stefanik has signaled to some of her colleagues that if she replaces Cheney, she plans to stay in leadership and as chair of the House GOP Conference only through 2022, wanting to pursue the top GOP job on the House Education and Labor Committee next Congress, according to a source with direct knowledge of the talks. The vote on the position could come as early as Wednesday.

McCarthy argued the impending vote to oust Cheney, who represents Wyoming, is as an opportunity for the party to choose the most effective leader to take on the Biden administration's agenda.

"Everyone in leadership serves at the pleasure of the conference and as you know, there's a lot at stake. Democrats are destroying the nation," McCarthy said, citing immigration issues and Friday's less-than-satisfactory jobs report as top concerns.

"That's why we will have a vote next week and we want to be united and looking -- moving forward and I think that's what will take place," he added.

Asked if Cheney's stance against former President Donald Trump hinders her from delivering the party's message, McCarthy said, "No, any member can take whatever position they believe in," but he went on to suggest that a leadership role is different than rank-and-file membership.

"What we are talking about, it's a position in leadership. We are in one of our biggest battles ever for this nation and the direction, whether this century will be ours. As conference chair, you have one of the most critical jobs of the messenger going forward," he explained.

The former president also endorsed Stefanik, saying in a statement last week that she "is a far superior choice, and she has my COMPLETE and TOTAL Endorsement for GOP Conference Chair."

But a few Republicans have warned against the party's intolerance of members who disagree with the former President.

On Sunday, Utah Republican Gov. Spencer Cox told CNN's Jake Tapper on "State of the Union" that "as we talk about broadening the tent and bringing in a new generation of Republicans, we really have to allow for those types of differences."

Republican Illinois Rep. Adam Kinzinger, a frequent critic of the former President, said on CBS' "Face the Nation" that the debate to oust Cheney is "not good for the future of this country."

"Liz Cheney is saying exactly what Kevin McCarthy said the day of the insurrection. She has just consistently been saying it. A few weeks later Kevin McCarthy changed to attacking other people. I think what the reality is, as a party, we need to have an internal look and a full accounting as to what led to January 6," Kinzinger said. "Right now it is basically the Titanic. We're in the middle of this slow sink."

Asked about Republican voters believing the election was stolen from Trump, Kinzinger said, "You cannot unify truth with lies."