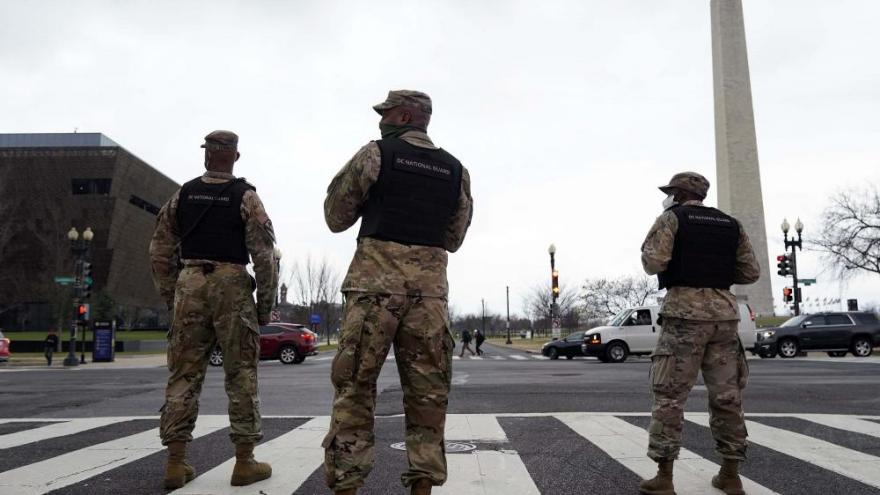 (CNN) -- Washington, DC, Mayor Muriel Bowser on Monday urged Americans to avoid the city during President-elect Joe Biden's inauguration next week and the Secret Service has been instructed to begin its preparations for the inauguration ahead of schedule.

Meanwhile, the National Guard has plans to have up to 15,000 National Guard troops to meet current and future requests for the inauguration, Gen. Daniel Hokanson, the chief of the National Guard Bureau, said Monday. The dramatic increase in troops comes as law enforcement in the nation's capital and around the country brace for further extremist violence amid the transition of power.

Speaking at a news conference Monday, Bowser, a Democrat, stressed that she was concerned about more violent actors potentially coming to the city in the run-up to the inauguration, saying, "if I'm scared of anything, it's for our democracy, because we have very extreme factions in our country that are armed and dangerous."

"Our goals right now are to encourage Americans to participate virtually and to protect the District of Columbia from a repeat of the violent insurrection experienced at the Capitol and its grounds on January 6," Bowser said.

She is also asking the Trump administration to cancel public gathering permits between January 10 and 24.

The emergency declaration request by Bowser would unlock additional funding for the city's security efforts for the inauguration. The mayor ultimately assessed in a letter to Trump over the weekend that despite the security assets the city has in place, "significant preparedness gaps remain that cannot be remedied without this emergency declaration and direct federal assistance."

Bowser told CBS's "Face the Nation" on Sunday that she will also ask the Department of Homeland Security to begin a "national special security event" timeline sooner than planned, as well as include the US Capitol in their coverage area for the inauguration.

Wolf said on Monday that he had instructed the US Secret Service to begin the National Special Security Event operations for Biden's Inauguration on Wednesday, instead of January 19, the day before Biden is set to be inaugurated.

"In light of events of the past week and the evolving security landscape leading up to the inauguration and at the recommendation of Secret Service Director James Murray, I have instructed the U.S. Secret Service to begin the National Special Security Event operations for the 2021 Inauguration effective Wednesday, January 13th instead of January 19th," Wolf said in a statement. "Our federal, state, and local partners will continue to coordinate their plans and position resources for this important event."

The preparations come as the FBI is warning that there will be protests around the country this weekend.

The bureau has received information indicating "armed protests" are being planned at all 50 state capitols and the US Capitol in Washington in the days leading up to Biden's Inauguration, according to an internal bulletin obtained by CNN.

Last month, Biden's camp urged people not to travel to DC for the inauguration, citing the worsening coronavirus pandemic. The scaled-back festivities will instead feature a virtual program to allow Americans to participate from home.

The National Park Service also announced Monday that it will close the Washington Monument to visitors for more than two weeks, a time period that includes the inauguration.

The park service said it also "may institute temporary closures of public access to roadways, parking areas and restrooms within the National Mall and Memorial Parks if conditions warrant, to protect public safety and park resources."

A senior defense official told CNN on Monday that National Guard troops who are already earmarked for the inauguration are beginning to arrive, and the plan is to have 10,000 in the city by Saturday.

There is a full rehearsal with troops this week in DC. The Justice Department command center will be extra robust with virtually every Cabinet department and law enforcement agency plugging in, the official said.

Currently there 6,200 National Guard members who already been mobilized in the wake of last week's attack on the Capitol by pro-Trump supporters.