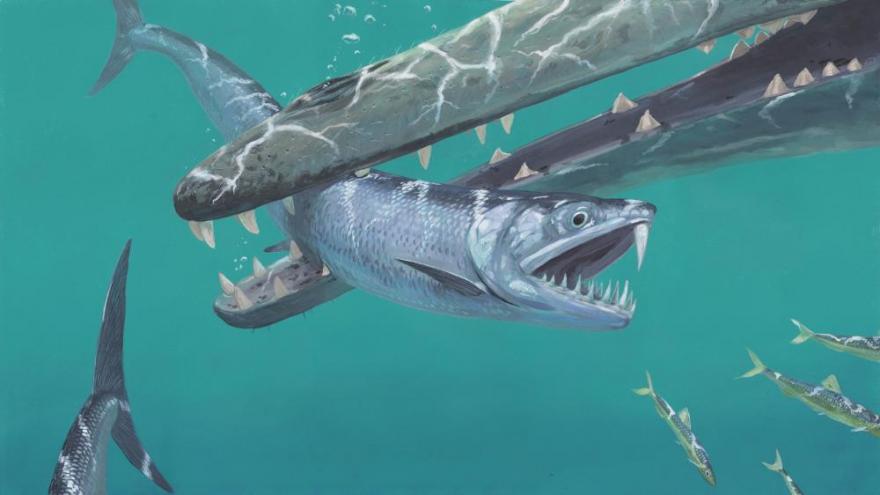 An artistic rendering of a saber-toothed anchovy, thought to have lived 40 to 55 million years ago before it went extinct.

(CNN) -- The anchovies we know today are small, plankton-eating fish that often flavor our Caesar salads and pizzas.

But fossil records show that anchovies of yore were more formidable.

An international group of researchers recently reported two species of fishes that roamed the seas about 40 to 45 million years ago. The two species had fangs lining their lower jaws, and a single saber tooth on their upper jaws, suggesting that they were predators who hunted smaller fishes.

"This discovery adds an important piece to the broader picture of fish evolution and of how marine environments changed into what we see nowadays," Alessio Capobianco, a University of Michigan researcher and the lead author of the study, wrote in an email to CNN.

The findings were published this month in the journal Royal Society Open Science.

Saber-toothed anchovies were an offshoot of today's species

The team studied two species of these saber-toothed anchovies using fossils. One, called Clupeopsis straeleni, was discovered in Belgium, and had first been described in the 1940s. It was just below half a meter long. The other, called Monosmilus chureloides, was discovered in Pakistan, and was about a meter in length.

CT scans conducted on the fossils revealed the unique arrangement of teeth, and also showed that the two species shared many anatomical features with modern-day anchovies.

"That was another big surprise for us, as all living anchovies are much smaller than those extinct forms and most of them are specialized to eat plankton and have very tiny teeth," Capobianco wrote.

The two species aren't direct ancestors of anchovies, but rather an "offshoot from the lineage leading to anchovies that did not survive to the modern day," Capobianco said. In fact, modern-looking anchovies likely already existed while their saber-toothed cousins were swimming the seas.

"However, because most living anchovies are plankton-feeders with tiny or no teeth, the discovery of saber-toothed anchovies poses the question: were the anchovies' ancestors also fanged, fish-eating creatures, and only later they evolved adaptations for plankton feeding?" Capobianco wrote. "Or were they similar in habits to the living species, and the saber-toothed forms evolved from plankton eaters?"

Approximately 66 million years ago, a global mass extinction wiped out not only dinosaurs, but predatory fishes and reptiles. The loss of those species in the seas left a vacancy in marine ecosystems, Capobianco explained, which several species tried to fill by diversifying and evolving into new forms.

Some of those predatory fish species evolved into animals that we see today, such as mackerels, tunas and barracudas, he said. Others, like the saber-toothed anchovies, ultimately went extinct.

"Saber-toothed anchovies are a perfect example of such failed evolutionary experiments: short-lived groups that did not survive to the modern day with remarkable adaptations that cannot be predicted on the basis of living species," Capobianco wrote.

It's unclear why the saber-toothed anchovies went extinct, Capobianco said.

One possible explanation could have been competition with other predatory fishes that survived to this day. Another explanation suggests their extinction might be a result of global climate changes that have occurred since they swam in the seas.

But there's not enough data right now to know.