Massive NASA rocket part to help put first woman on the Moon, to be ferried up Mississippi River on barge 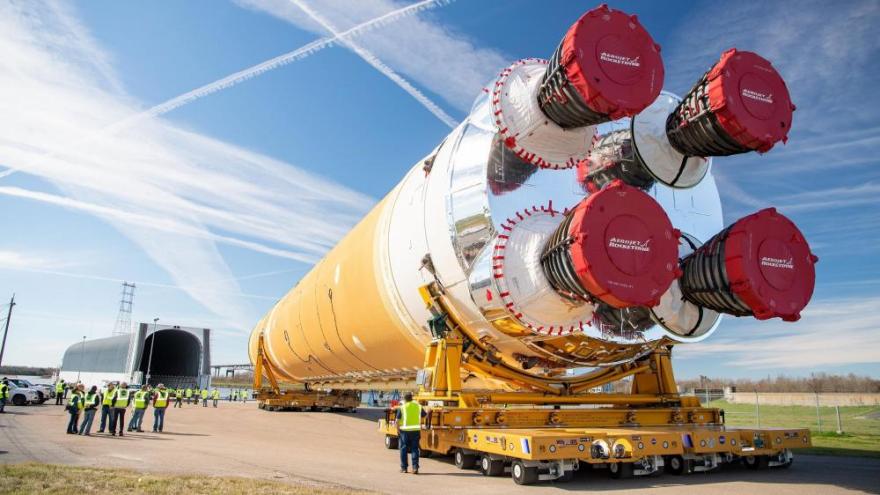 The core stage of the huge rocket being built to take the first woman to the Moon has left its factory in New Orleans for Mississippi, where it will undergo its final testing before its first launch.

(CNN) -- The core stage of the huge rocket being built to take the first woman to the Moon has left its factory in New Orleans for Mississippi, where it will undergo its final testing before its first launch.

The rocket is part of the Space Launch System (SLS) for NASA's Artemis lunar exploration program, which aims to send the first woman and next man to the Moon by 2024. NASA officials also hope the SLS will be used to reach Mars and other "deep space destinations."

On Wednesday, the 212 foot long and 27 foot diameter rocket part made a 1.3-mile trip from the Michoud factory in New Orleans to be loaded on to the NASA's Pegasus Barge, which is set to float 40 miles up the Mississippi River to NASA's Stennis Space Center near Bay St. Louis.

At the Stennis Space Center, the rocket will undergo what NASA is calling the Green Run test series, which will verify whether the stage is ready to be shipped to the launch site.

Once final testing is complete, Artemis 1 has an estimated launch of November 2020 from Kennedy Space Center, although reports suggest it could be delayed until 2021. The first mission will be unmanned, however the Orion crew capsule and service modules will be on board.

It will be sent on a trajectory to the moon, where it will perform a flyby within 60 miles of the surface and enter a distant retrograde orbit that takes Artemis 1 farther than any of the Apollo vehicles, NASA said last year.

The orbit will last between six and 20 days, depending on when the launch occurs. When it returns to Earth, Artemis 1 will splash down in the Pacific Ocean.