Massive comet discovery dwarfs all others 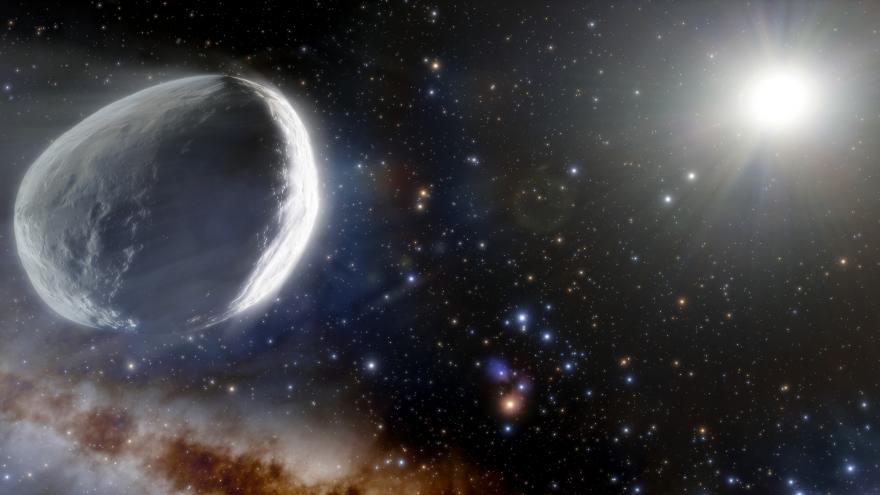 (CNN) -- Messengers from the past are all around us.

In our solar system, comets are the icy leftovers from when the sun and planets formed. They hold the mysteries of that primordial soup.

The murky beginning of life on Earth is thought to be trapped within the deepest, oldest rocks, but scientists wonder whether everything made it into the record.

New opportunities and research techniques are allowing us to peer into the past and answer questions originating from times so distant that they are difficult to fathom.

Here are some of the revelations made possible by science this week.

Astronomers have discovered the largest known comet, and it's coming to a sky near you in 2031. That gives you plenty of time to track down a good telescope -- you'll need it to spot this roaming celestial body.

Comet Bernardinelli-Bernstein, named for the astronomers who found it, is about a thousand times more massive than other comets and between 62 and 124 miles (100 and 200 kilometers) across.

The unusual comet has been making its way toward our sun for millions of years. It likely came from the Oort Cloud, the birthplace of icy, ancient comets and a place more distant from the sun than anything in our solar system. Just imagine what scientists will learn as they observe it for years to come.

And for skygazers wanting a more immediate thrill, look for Saturn shining brightly in the night sky on August 1 and 2.

A long time ago.

Historians have been able to re-create the home of Thomas Cromwell, notorious chief minister to England's King Henry VIII -- and it turns out that Cromwell and his family lived in a very, very, very fine house (but it's unknown if they kept cats in the yard). Cromwell was instrumental in passing reforms that allowed the King his many infamous marriage annulments.

An artist's impression of the building depicts the luxurious 16th-century London mansion, something that cost £1,600 to build from scratch in 1535 -- can you guess how much that is now?

The impressive home included an armory, among other grand features, including the one thing Cromwell possessed that Henry VIII wanted most.

If you thought the cicadas were done singing their summer song, say hello to the annual cicadas, appearing in a tree near you as August approaches.

These lesser-seen insects aren't like the periodical ones with red, beady eyes that carpeted the East Coast earlier this year.

Instead, these little guys are green, and they love to scream during the dog days of summer.

And even though they appear once a year, there is still a bit of mystery about them that baffles researchers.

While studying the urns of an ancient society, researchers stumbled upon the remains of a Bronze Age woman and her twin babies.

The young woman lived along the Danube River in Hungary about 4,000 years ago. Her urn also contained items that suggested she was a high-ranking member in the Bronze Age Vatya culture. An analysis of her bone remnants revealed more surprises.

Previously, cremated remains have been overlooked in the quest to understand ancient societies. But new research techniques are allowing scientists to understand customs, behaviors and even travel patterns of cultures that practiced cremation.

The Arctic may seem like it's permanently chilly, but Greenland is experiencing surging temperatures that have triggered its most significant melting event of the year.

Greenland's ice sheet lost so much on Tuesday that it would cover the entire state of Florida in 2 inches of water.

As our global temperatures increase, ice loss is on the rise. Surprisingly, this current melting event isn't a record -- in fact, it has been worse.

If we don't curb our use of products that release greenhouse gases, which trap heat, more extreme melting events are on the horizon.

-- The largest moon in our solar system has water vapor in its atmosphere, according to Hubble Space Telescope observations.

-- Boeing's Starliner spacecraft, designed to carry NASA astronauts, will launch an uncrewed test flight next week after a previous botched attempt -- and a slight delay after trouble on the International Space Station.

-- This 890-million-year-old fossil may belong to the earliest animal life on Earth.