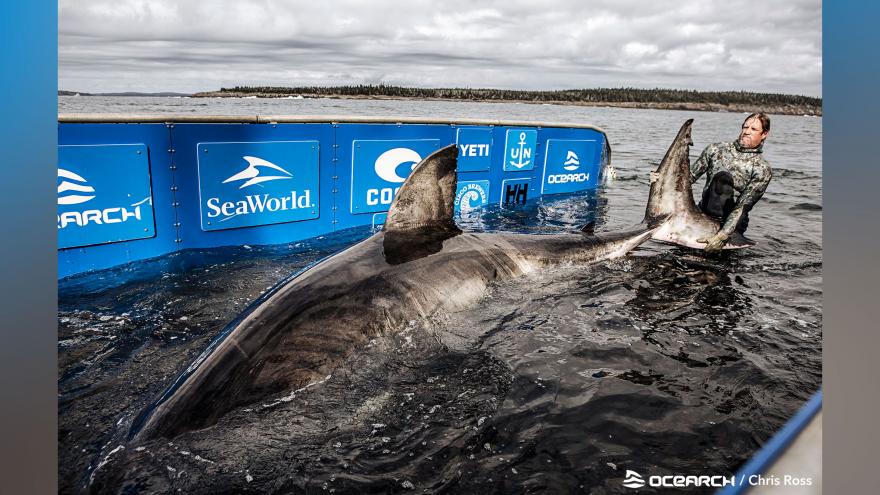 (CNN) -- Researchers working in the waters off Nova Scotia, Canada, have found a huge great white shark that weighs 3,541 pounds and measures 17 feet 2 inches in length.

Scientists from OCEARCH, an NGO that is tagging and sampling white sharks, described the female shark as "Queen of the Ocean" and say they have called her Nukumi.

"We named her 'Nukumi', pronounced noo-goo-mee, for the legendary wise old grandmother figure of the Native American Mi'kmaq people," Ocearch wrote in a Facebook post Saturday.

The Mi'kmaq culture has deep roots in Nova Scotia, according to the post.

"With the new data we've collected, this matriarch will share her #wisdom with us for years to come," OCEARCH wrote.

Nukumi is the largest of eight great whites that researchers have sampled during the current expedition, which has been running for 27 days as of Monday.

OCEARCH also posted a video showing Nukumi lying on a special submersible platform built onto the side of its research vessel with researchers around her, and subsequently swimming away.

OCEARCH is an ocean data-collection organization that has tagged and collected samples from hundreds of sharks, dolphins, seals and other animals.

The group is using the data to learn about migration patterns and uncover previously unknown details about shark lives.

In October 2019, OCEARCH caught and tagged a male shark they named Ironbound off Lunenburg, Nova Scotia.

By late December his tracker showed the 12-foot, 4-inch long shark had traveled 1,473 miles down the US East Coast to Key Biscayne, near Miami, OCEARCH said at the time.

Great white sharks are the world's largest predatory fish, according to the World Wildlife Federation, and are known to rip chunks out of their prey, which are swallowed whole.

Despite their fearsome reputation, the WWF says the sharks are a vulnerable species and their numbers are decreasing.