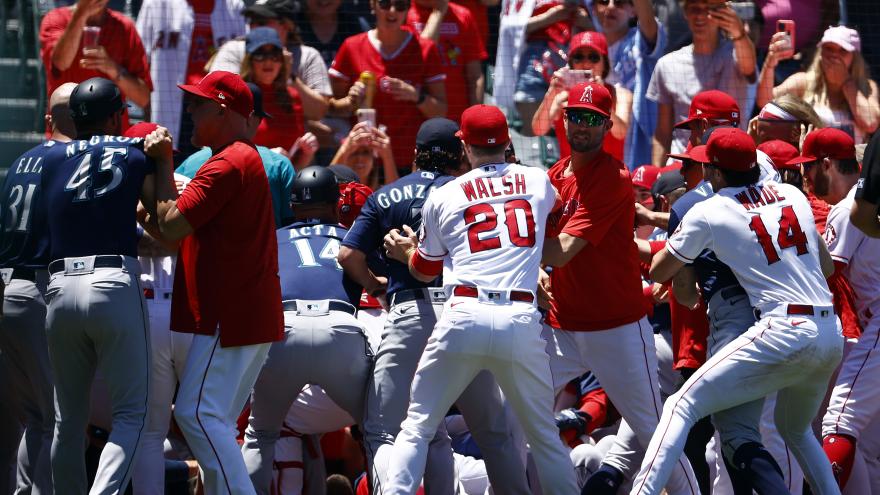 (CNN) -- The Los Angeles Angels' win over the Seattle Mariners in the MLB on Sunday was overshadowed by a mass brawl that broke out between both teams in the second inning.

With the Mariners already feeling aggrieved that an earlier pitch thrown by Andrew Wantz was close to Julio Rodriguez's head, Wantz then hit Jesse Winker on the hip.

That sparked angry scenes as a furious Winker made his way towards the Angels' bench, leading both benches to empty and eventually resulting in eight ejections.

"That probably shouldn't happen in the game, what happened out there today," Seattle manager Scott Servais, one of those ejected, told reporters.

"Emotions running high, but it was pretty clear what was going on. They switched, put an opener in there to throw some balls at us. Got out of hand from there and kind of a black eye."

There was a delay of almost 20 minutes before play got back underway and Angels manager Phil Nevin said the run of eight matches in 11 days between these teams contributed to the "ugly" scenes.

"Look, you play eight games in a matter of a week against the same team, things like this happen," Nevin he said. "The scheduling, tensions, that's baseball sometimes, unfortunately.

"There's some ugly incidents once in a while. I think that's just what happened today."

Winker was far from contrite about his role in the brawl, but he did offer his apologies to the fans after cameras caught him putting his middle fingers up at them as he left the field.

"The only thing I'm going to apologize for is flipping the fans off," he said. "That's it. As fans, they're spending their hard-earned money to come watch us play a game, and they didn't deserve that, so I apologize to the fans, especially the women and children."

The Angels eventually claimed a 2-1 win after Luis Rengifo hit a home run to tie the game and then David MacKinnon scored a single in the seventh inning.