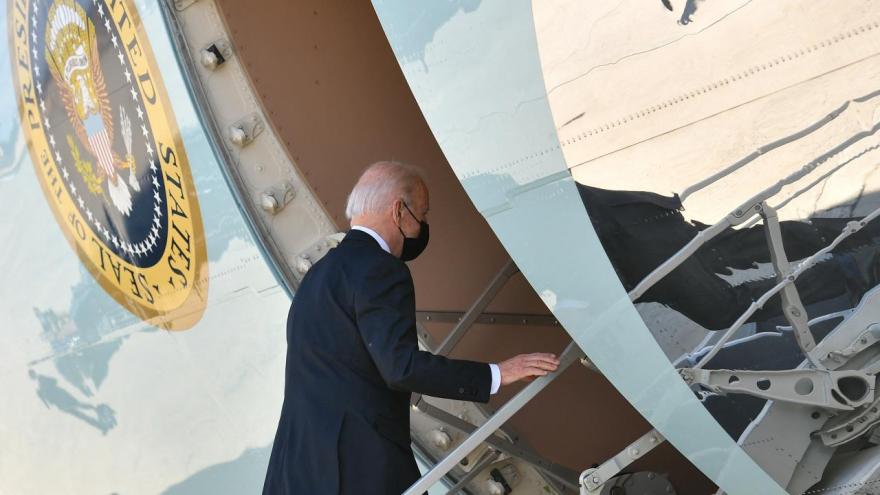 US President Joe Biden boards Air Force One before departing from Joint Base Andrews in Maryland on April 19, 2022.

(CNN) -- The Justice Department said Tuesday it will appeal a court ruling that struck down the federal government's mask mandate for travelers -- but only if the US Centers for Disease Control and Prevention determines the mandate is still necessary to protect public health.

"The Department of Justice and the Centers for Disease Control and Prevention disagree with the district court's decision and will appeal, subject to CDC's conclusion that the order remains necessary for public health," spokesman Anthony Coley said in a statement.

"The Department continues to believe that the order requiring masking in the transportation corridor is a valid exercise of the authority Congress has given CDC to protect the public health. That is an important authority the Department will continue to work to preserve," Coley said.

Before the mandate had been struck down, the Biden administration had extended the requirement through May 3, which required masks to be worn aboard public transit, on planes, on trains and inside airports. The CDC was set to assess whether the mandate was still needed until May 3, and Coley said any appeal would come after that date.

"If CDC concludes that a mandatory order remains necessary for the public's health after that assessment, the Department of Justice will appeal the district court's decision," Coley said.

The move comes after the Justice Department had spent much of the last day considering whether to fight a court decision that caught much of the administration, airline industry, local public transit departments and everyday Americans off-guard. An appeal would mean that the administration would head to a higher court to extend the mandate -- despite the fact that many airlines and public transit systems have already decided to make masks optional following the court ruling.

If an appeal happens, it would be risky move that could limit the government's ability to make similar mandates in the future. If the 11th Circuit -- which oversees appellate challenges from Florida -- upholds the ruling striking down the mandate, it would be precedent for all the other federal courts in that circuit, which covers the Southeast. A Supreme Court ruling upholding the decision to strike down the mandate would make the judge's conclusions about CDC authority binding nationwide.

Masks aboard Air Force One

Earlier Tuesday, President Joe Biden said he wasn't sure if his administration would appeal the decision.

When asked in New Hampshire if he wanted the Justice Department to appeal the new mask ruling, Biden said, "I haven't spoken to the CDC yet." And when later pressed on the trip about whether there would be an appeal, Biden repeated, "I haven't gotten any brief from my CDC. I don't know. We're following the science."

Health and Human Services Secretary Xavier Becerra had earlier suggested on Tuesday that such a move was likely.

"We are right now in the process of deciding, and we likely will appeal that ruling. Stay tuned," Becerra said at a news conference with Nevada Gov. Steve Sisolak.

The evolving situation was on display Tuesday as passengers on Biden's trip aboard Air Force One to New Hampshire were required to wear masks while, at the same time, commercial airline passengers across the United States were stepping into plane cabins with the option to forgo a mask. The President boarded the aircraft Tuesday afternoon sporting a black mask.

But despite the rules on Air Force One, Biden told reporters upon his arrival in New Hampshire that Americans must make their own decisions about whether to wear masks on planes.

Biden and his team caught off-guard by judge's ruling

Administration officials had been caught by surprise when the judge in Florida struck down the requirement, which had been in place for 441 days. Suddenly, a decision administration officials had been contemplating for weeks -- whether American travelers must wear masks -- was made urgent and complicated by US District Judge Kathryn Kimball Mizelle, who was selected by Biden's predecessor, Donald Trump.

Administration lawyers have been weighing their options for the past 24 hours on how to respond to the decision. People familiar with the discussions said the lawyers were considering a number of factors but have been primarily concerned the judge's ruling could undermine the CDC's authority to enforce public health rules going forward.

At the same time, some officials voiced concern that a higher court could also rule against the mandate, making an appeal risky and leading to more confusion about the rules. A higher court ruling, potentially at the Supreme Court, could set a precedent undercutting the CDC's authority, officials said.

The final outcome seemed to split the difference. While the Justice Department said it may appeal the decision, it left the CDC in charge of determining whether the mandate was still necessary. Only then would an appeal go forward.

Administration officials said Tuesday evening they expected the CDC would determine an appeal is necessary but that the decision rests with the health agency.

Some of Biden's aides were frustrated by the Florida court's decision. But privately, one administration official acknowledged the mask mandate was already nearing its end.

The order was also parsed by lawyers at the White House, Department of Justice and the Department of Homeland Security, which oversees the agency that had been responsible for enforcing the rules. As they digested the 59-page ruling, it wasn't clear whether passengers sitting in airports or aboard airplanes at 30,000 feet could remove their face coverings without running afoul of federal rules.

Airlines, which had been lobbying the administration for weeks to lift the mandates, sought guidance from the government on what exactly they should tell crews and passengers, whose phones were lighting up with news of the ruling.

And in the hours after the judge's decision on Monday, White House press secretary Jen Psaki was unable to say whether a federal mask mandate for travelers remained in place.

"We're continuing to recommend people wear masks. I don't have any update," Psaki said when asked whether the mask mandate is still in place for travelers boarding their flights Monday night.

But after a few hours of deliberation, administration lawyers determined the judge's order meant the mask mandate wasn't in effect -- meaning the government couldn't enforce it. The CDC emphasized that it was not enforcing the ruling in a subsequent statement to CNN on Tuesday.

Since the ruling and the administration's subsequent guidance relaying that the mandate could not be enforced, several US airlines, some public transit authorities, Uber, Lyft and Amtrak have all announced that masks were no longer required for passengers.

The White House on Tuesday also pushed back on one of those companies, Delta Air Lines, after the company referred to Covid-19 as an "ordinary seasonal virus" in its post announcing that masks are optional on its flights.

The original post from Delta read: "We are relieved to see the U.S. mask mandate lift to facilitate global travel and COVID-19 has transitioned to an ordinary seasonal virus."

Delta subsequently removed the reference to "ordinary seasonal virus" from its post.

Competing political interests over whether to mask up

If the White House was disappointed in the turn of events, scenes of air passengers gleefully removing their masks midair illustrated the complex emotions surrounding the moment.

Mask mandates on planes have long proved among the most contentious of pandemic-era rules. Cabins have turned into breeding grounds for conflict, often over the necessity of wearing face coverings.

Polling from March found that Americans are close to evenly divided in their support for a continuing mask mandate for travel.

In a March 15-22 poll from the Kaiser Family Foundation, US adults were split on the federal mandate requiring people to wear masks on airplanes, trains and other public transportation. About half, 51%, said the government should let the mandate expire after April 18 (as it was originally set to do), while another 48% wanted to see the mask mandate for travel extended.

About two-thirds of Americans are vaccinated with at least their initial series and less than a third have received their boosters. But many are signaling that they are ready to move on and live with the virus -- with only 1 in 10 calling the pandemic a crisis in a recent Axios-Ipsos poll.

Reported cases of coronavirus, meanwhile, are rising in more than half of the 50 states, largely driven by the BA.2 omicron subvariant. But Covid-19 hospitalizations are close to their lowest level since the government began tracking that metric in July 2020. The BA.2 subvariant of Omicron and its offshoots are now causing virtually all cases of Covid-19 in the US.

When asked if the White House is concerned whether the administration being out of step with the American public's perception of Covid-19, Psaki told reporters on Tuesday, "(W)e don't make these decisions based on politics or based on the political whims on a plane or even in a poll."

She argued that "there are still a lot of people in this country who still want to have masks in place," pointing to immunocompromised individuals and parents with young children.

Biden administration looks for a return to normal -- on its terms

In some ways, lifting the mask requirement on planes, trains and buses was a natural step for a White House intent on returning life to normal.

A few hours before the ruling on Monday, Biden was greeting 30,000 guests on the South Lawn for a revived Easter Egg Roll in Washington, the largest event he's hosted at the executive mansion since taking office.

Even amid a spike in cases within his circle and among high-profile officials in Washington over the last month, Biden hadn't altered his routines. And even his top aides had begun conceding that in a different phase of the pandemic, it was entirely possible he becomes infected himself.

Biden will headline two high-dollar fundraisers in the Pacific Northwest when he visits at the end of this week, according to people familiar with the plans -- his first time hitting the road to raise money since taking office. He'd avoided in-person fundraising events for much of his presidency and campaign amid the pandemic.

The fundraisers are the latest signal the White House is moving to a post-pandemic normal. They will support the Democratic Grassroots Victory Fund, which is a joint account between the Democratic National Committee and state democratic parties.

Biden is otherwise using his trip to promote his infrastructure law. It will be only his second time on the West Coast since entering office.