Masks are required at Ford plant where Trump will visit 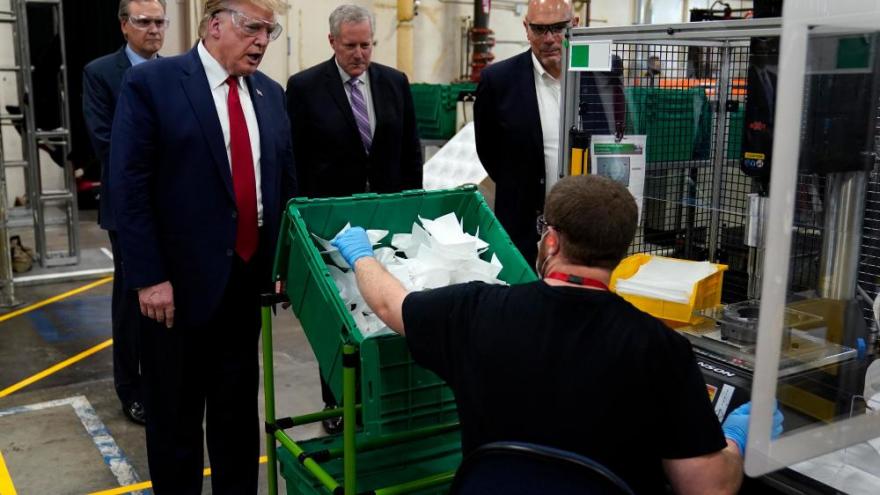 President Donald Trump participates in a tour of a Honeywell International plant that manufactures personal protective equipment, Tuesday, May 5, 2020, in Phoenix, AZ.

(CNN) -- When President Donald Trump visits a Ford manufacturing plant in Michigan on Thursday, everyone at the facility will be required to wear a mask.

Whether Trump wears one himself remains to be seen. The President has so far resisted covering his face in public, even as he insists that aides wear them in the West Wing and the federal government recommends their use in public.

What is clear is the stop in Michigan will set up another opportunity for the President to either adhere to the rules set for others or flout them again.

On Tuesday, Ford said it had detailed its safety policies to the White House -- including that everyone wear a mask.

"In preparation for the visit, we've shared with the White House all of Ford's safety protocols, including our self-assessment, thermal scanning and manufacturing playbook, which outlines our policy that everyone wears PPE," a Ford spokesman told CNN. PPE stands for "personal protective equipment," including masks.

"The White House has its own safety and testing policies in place and will make its own determination," the company spokesman added.

The document that Ford shared with the White House -- titled "Return to Work Manufacturing Playbook" -- spells out the policy in further detail.

"Face masks are required to be worn by everyone, in all facilities, at all times," the document reads. "This measure of protection will remain in effect until such time as the COVID-19 virus is no longer a critical risk."

Under the section "Who needs to wear a face mask?" the document states the policy applies to "ALL Ford employees, agency, visitors, contractors and vendors."

"Face masks will be provided upon entry and must be worn at all times, in all locations," the document reads.

The Ford plant in Ypsilanti, Michigan, that Trump plans to visit on Thursday has been repurposed to produce ventilators and PPE. He's expected to tour the facility and deliver remarks.

Asked on Tuesday whether he would wear a mask when he visits, Trump said he hadn't thought about it yet.

But on two previous trips over the past weeks, Trump hasn't worn a mask even as nearly every other person at the facilities he visited did.

Bare-faced, he toured a Honeywell plant in Arizona that produces N95 respirator masks and a distribution facility in Pennsylvania that specializes in medical supplies.

Trump has never been photographed wearing one, though he said he did put one on backstage during the visit to Honeywell. At that facility, signs indicated wearing a mask was required but Trump was informed by Honeywell executives that he did not need to wear one, according to the White House.

Other White House officials have now begun wearing masks more regularly after the White House issued a memo to staff saying a face covering was required in the West Wing. Trump has told reporters that he issued the edict himself.

But Trump himself has resisted covering his face, in part because he's worried what message wearing a mask would send.

White House officials have explained that because Trump is tested for coronavirus regularly, he doesn't risk spreading the virus to others if he forgoes a mask. But studies have shown the test the White House uses might be unreliable.

Privately, Trump has questioned whether he should ever be seen wearing a mask in public, concerned it might contradict his public message that the virus is waning and the country is ready to reopen.

He has shown little interest in wearing one as an example to the country, even though many people are now required to wear masks to enter grocery stores, pharmacies and other businesses.