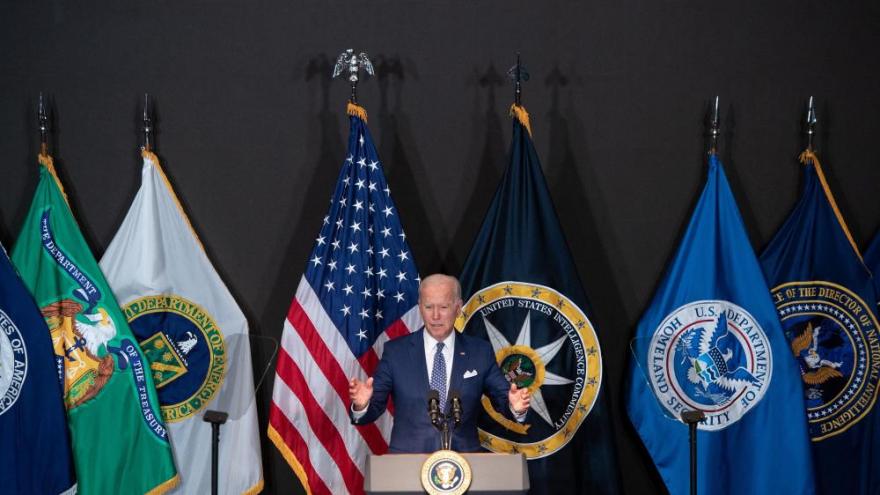 The steps President Joe Biden's administration is adopting to re-recommend masks and require vaccines for federal workers amount to emergency actions designed to contain a new surge of Covid-19 that has quickly become the top issue confronting the White House.

(CNN) -- The steps President Joe Biden's administration is adopting this week to re-recommend masks and require vaccines for federal workers amount to emergency actions designed to contain a new surge of Covid-19 that has quickly become the top issue confronting the White House.

The moves reflect a dramatic shift from earlier messaging about the pandemic waning and signal the fight of Biden's presidency is far from over. Biden on Tuesday explicitly laid blame for the current situation on unvaccinated people -- an escalation of his use of the bully pulpit as he furiously searches with his team for ways to curb the spread of the virus.

The White House and US Centers for Disease Control and Prevention are adjusting its tactics because of a surge in cases driven by the fast-spreading Delta variant and new information about transmission even by vaccinated people, multiple sources familiar with the matter said.

The decisions were not taken lightly, administration officials said, and came after a series of meetings, including a Sunday evening session where the new mask guidelines and a vaccine requirement at the Department of Veterans Affairs were discussed among Biden's team. Officials from the CDC and other federal health agencies continued to brief White House officials into Monday.

Officials said such a requirement wouldn't include dismissing those workers who remain unvaccinated; instead, new rules would require regular testing and masks for those who have refused shots, making life difficult for anyone who decides not to get a vaccine. White House staffers were back in masks on Tuesday, required to wear them regardless of vaccination status, per an official.

Biden's aides said they were aware of the potential political fallout from the recent steps, and acknowledged privately that earlier resistance to vaccine requirements was based partly on the expectation it would spark backlash. But now, officials said health concerns should outweigh what many expect will be accusations of flip-flopping and harsh blowback from Republicans.

Top officials pored through new data and evidence regarding transmissibility of the variant and breakthrough cases. Dr. Anthony Fauci, director of the National Institute of Allergy and Infectious Diseases, briefed Biden on the changes Tuesday morning. Among the more significant announcements was a recommendation everyone in K-12 schools wear a mask, regardless of their vaccination status.

"If you're not vaccinated, you're not nearly as smart as I thought you were," Biden said on Tuesday, adopting a harsher tone against the still-hesitant he blamed for the continuing outbreaks.

"We have a pandemic because the unvaccinated and they're sowing enormous confusion. And the more we learn about this virus and the Delta variation, the more we have to be worried and concerned. And there's only one thing we know for sure, if those other hundred million people got vaccinated, we'd be in a very different world," he said.

One person close to the White House called the Veterans Affairs mandate a "watershed" moment, putting the federal government in the business of vaccine mandates in what this person described as a test case for more action.

"Delta creates a different environment," this person said, explaining the White House's shift in tactics. "This should hopefully egg along the private sector."

Ultimately, concerns about spikes in hospitalizations and deaths in unvaccinated Americans led to decisions officials acknowledge will be politically fraught. The VA said four of its employees had recently died from Covid-19 -- and that none had been vaccinated.

On both masks and vaccine mandates, Biden officials have acknowledged privately that taking a forward-leaning stance will open the administration to political attacks. The President's aides rejected "vaccine passports" early in their tenure, aware the concept had become a lightning rod. But since then, as the vaccination campaign stalled, health experts have increasingly called for a more aggressive posture.

In another sign of the growing concern over the Delta variant, the House of Representatives' attending physician sent out new guidance later Tuesday requiring that "well-fitted, medical grade" masks be worn in all interior spaces of the House in light of the new CDC guidance.

"To be clear, for meetings in an enclosed US House of Representatives controlled space, masks are REQUIRED," Capitol Attending Physician Brian Monahan said in a memo.

Worried over moving too slow

Some of the administration's health officials were concerned the CDC was moving too slowly to update its mask guidance as the Delta variant ripped through communities, according to a senior administration official. White House officials have repeatedly said it would be up to the CDC whether to change official guidance and that they would follow the lead of health and medical experts.

Two months ago, when the CDC updated its mask guidance saying most who are fully vaccinated could go without masks indoors, it moved so quickly that administration officials were informed less than a day before. Biden himself delivered a statement hailing the milestone.

This time, officials said, the process moved in a more methodical way as the CDC decided how to proceed. A senior administration official said the decision was spurred by the more transmissible Delta variant.

"It's based on the fact that the Delta variant is clearly more transmissible than the prior ones," the official said.

Versions of the virus that dominated in the past generally did not appear to be transmitted by people who had been fully vaccinated.

"When you get information about risks and how to mitigate risks, there's a public health obligation to let people know about it," the official said.

The White House is hoping that the new guidance will give local officials "a lot of cover" to implement new mask mandates where appropriate.

It's still unknown whether the new steps will be effective.

New recommendations for fully vaccinated people to wear masks indoors apply to areas of the country with high rates of transmission. But many of the hardest-hit areas are places where mask wearing was already unusual. And some Republican governors -- many in Covid hot spots -- have declared they will not return to mask mandates.

The new guidance comes about two months after Biden declared it a "great day in America" when the CDC revised its mask guidelines for vaccinated people and reflects a psychological setback for a country struggling to emerge from the grips of the pandemic.

Still, the new steps are a sign that Biden and his team are looking for additional ways to contain a pandemic that is now entering a new phase because of the Delta variant.

White House officials have been encouraged in recent days by upticks in vaccination rates, notably in states where caseloads are rising. But concerns over vaccine hesitancy remain, leading to new vaccine mandates for cities and states across the country.

VA vaccine mandate could be a key test

After resisting implementing any vaccine mandates for federal workers or overseeing a vaccine credentialing system, the Biden administration dipped its toes in the business of compelling Americans to get vaccinated, beginning with a narrow requirement requiring Department of Veterans Affairs' health care workers be vaccinated.

The White House views the VA mandate as a key test that could clear the way for other vaccine mandates within the federal government and which could encourage private sector entities to follow suit, two sources familiar with the decision said, but a national mandate is not feasible nor being contemplated.

Biden administration health officials increasingly believe that making vaccination mandatory or unavoidable is the only way to break stalled vaccination rates that are keeping the US from reaching herd immunity.

About 6% of adults said they would only get vaccinated if required, according to the Kaiser Family Foundation's most recent monthly survey. Another 10% said they will "wait and see" before getting vaccinated.

France saw a spike in vaccinations after that nation's president, Emmanuel Macron, said residents will need to be vaccinated or show a recent negative coronavirus test to enter restaurants and bars beginning next month.

The White House has long resisted getting involved in coronavirus vaccine mandates and credentialing systems, fearing that doing so would only feed right-wing accusations of government overreach and undermine efforts to convince hesitant conservatives to get vaccinated.

Heading in a tougher direction

But stalled vaccination rates -- particularly in southern, conservative states -- are now propelling the White House in a different direction.

"You don't pursue routes that we announced today until you've gone through and given people the opportunity to get vaccinated," one source close to the White House said, pointing to the importance of giving Americans the choice to get vaccinated before turning to harder-line tactics.

On Monday, a collection of medical groups representing doctors, nurses and pharmacists called for mandatory vaccinations for US health care workers, writing, "The health and safety of U.S. workers, families, communities, and the nation depends on it."

"These actions, in our view, are meant to keep patients and employees safe, and in fact I expect our own federal health care providers may look at similar requirements, as they do with other vaccines," she said.

Asked whether such requirements could help improve vaccination rates, Psaki said they could.

"It may," she said. "And beyond the President's goals, it may save lives, and that's the most important factor, in our view."

Biden's powers to mandate shots among the wider public is limited. He could make them compulsory for members of the military but hasn't taken that step yet, as the three vaccines currently authorized for emergency use in the United States await full approval by the US Food and Drug Administration.

The White House itself has not required vaccines for its workers and hasn't revealed the vaccination rate among employees there. For large-scale events, like this month's July Fourth party on the South Lawn, proof of vaccination was not a requirement for entry.

Other federal health officials have been more outspoken about requiring vaccines. Fauci said on CNN this month that requirements would become increasingly necessary.

A number of Republicans, however, have resisted any attempt to require the vaccine. And like mask guidelines and restrictions on gatherings, the issue has turned into a political flash point.

In recent weeks, Justice Department officials have been weighing requests from private businesses and from federal agencies seeking legal backing for policies aimed at encouraging vaccinations, according to people briefed on the matter.

So far, the department hasn't taken a public position on whether businesses and government agencies can require employees or customers to be vaccinated. But some legal court fights already underway could provide an avenue for the Justice Department to play a role.

Norwegian Cruise Line, which has said it wants to require proof of vaccination for its trips, is suing the state of Florida over the state's policy to fine businesses that require vaccinations.

If the Justice Department weighs in, it could mark a reversal from the previous administration. Last year, Attorney General William Barr used the Justice Department's legal power to try to fight certain Covid restrictions, including joining some businesses that sought to overturn state mask mandates.