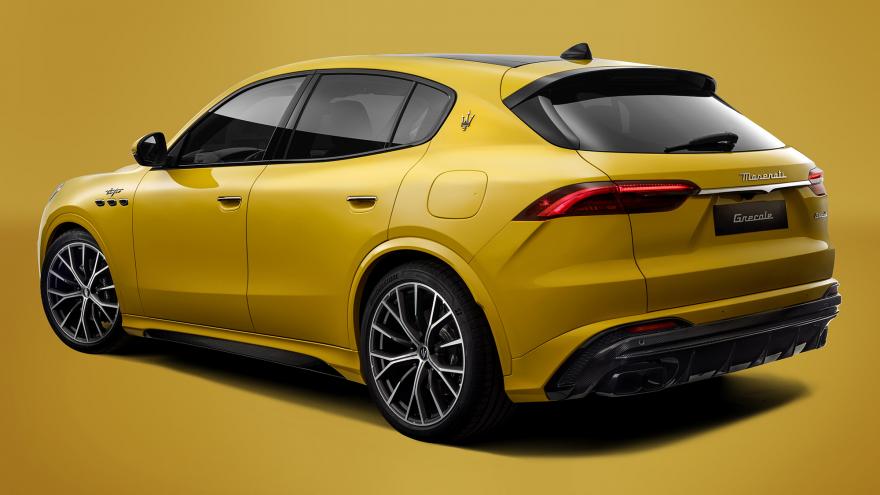 (CNN) -- Maserati unveiled its new Grecale SUV Tuesday. It's only the second SUV in the Italian luxury brand's history and the first that will be available in an all-electric version. It's an early step toward making the Italian luxury car brand fully electric by 2030.

In the meantime, all Maserati models will be available in electric versions by 2025, Maserati executives said.

The Grecale will also be available with a high-performance V6 engine or with a four-cylinder engine with a mild hybrid system. Gas-powered versions of the SUV will be available forsale later this year. The all-electric version, called the Grecale Folgore, will go on sale next year.

The Grecale is smaller than the Levante SUV, the model that accounted for 59% of Maserati's worldwide sales last year. Like the Levante and the Ghibli sedan, the Grecale is named after a wind. The Grecale, pronounced gre-CAH-leh, is an easterly Mediterranean wind.

The electric Grecale Folgore will be part of the Italian luxury brand's long-term plan to shift toward selling only electric vehicles. (Folgore means "lightning" in Italian.) Maserati follows a number of other luxury auto brands, including Bentley and Jaguar, in announcing a shift toward fully electric line-ups. In Maserati's case the shift is somewhat more surprising, given the brand's strong identification with the raspy, metallic sounds of its usually Ferrari-built internal combustion engines.

Maserati has only recently started production of the new MC20 supercar, which has a Maserati-designed and built 630 horsepower V6 engine. The $216,000 MC20 is the only current Maserati model with an engine not made by Ferrari.

The high-performance Grecale Trofeo will have a 523 horsepower version of the MC20's engine. The SUV will be able to go from zero to 60 miles an hour in 3.6 seconds, and will have a top speed of 177 mph, according to Maserati. Maserati has not yet announced horsepower or performance figures for the electric Grecale Folgore

When it goes on sale in 2023, the Grecale Folgore will be Maserati's second all-electric model. The first will be the all-electric 1,200 horsepower Granturismo Folgore, a new version of Maserati's two-door four-seat sports car. Maserati has revealed only dimly lit images of the car.

New, fully redesigned versions of the Quattroportesedan and Levante SUV, including all-electric versions, will be introduced by 2025, Maserati chief executive Davide Grasso said during a presentation. The smaller Ghibli sedan will be discontinued because there simply isn't enough market interest in sedans anymore, he said. An all-electric version of the MC20 supercar will also be available by then.

Maserati is part of Stellantis, the global automotive conglomerate formed last year which also includes Dodge, Jeep Peugeot, Citroën, Fiat and others. Stellantis CEO Carlos Tavares has expressed skepticism about the efficacy of the broad auto industry push toward electric vehicles when it comes to actually abating global warming. He believes that offering electric vehicles will do little, he said in a recent interview with CNN Business, in the absence of broader moves for more clean energy, widely available charging infrastructure and cheaper batteries. Regardless, he said, Stellantis is going forward with electrification because of the way the industry is going and what government regulations demand.

"That's a pure competitive story," Tavares said. "And we are competitors."