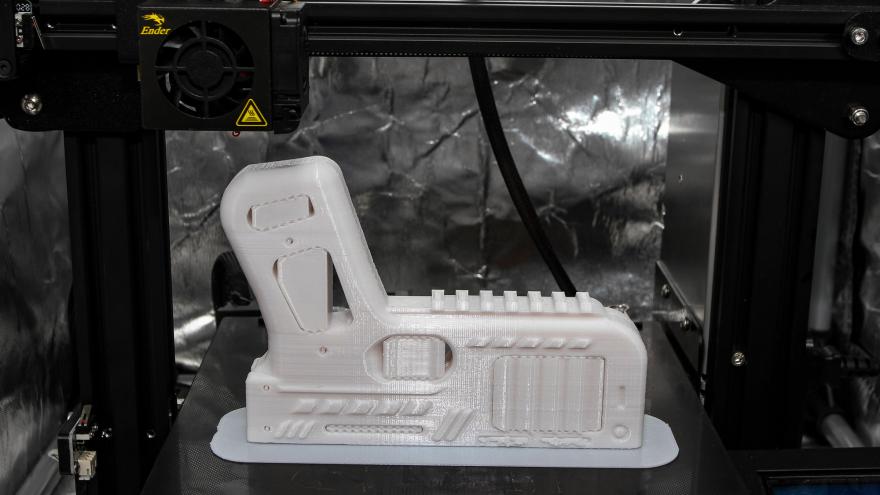 (CNN) -- Maryland became the latest state on Friday to severely restrict the sale of so-called "ghost guns," as law enforcement officials and gun violence prevention groups continue to sound the alarm on the rise of the privately-made firearms.

Maryland joined Washington, DC and 10 other states -- California, Connecticut, Delaware, Hawaii, Nevada, New Jersey, New York, Rhode Island, Virginia and Washington -- in banning or restricting the purchase or use of ghost guns, which are often bought online and assembled at home.

Gov. Larry Hogan announced Friday he is allowing the legislation, which addresses issues around untraceable firearms, to pass without signature.

"I appreciate the work you have put into Senate Bill 387/House Bill 425 to address issues surrounding untraceable firearms, and agree that it is a positive step as we seek to stem the tide of violent crime, which is why I am allowing it to take effect," Hogan said in a statement.

"But it does nothing to penalize those who actually pull the triggers on firearms, and deflects away from the need to take decisive action to hold violent criminals accountable," the statement read.

A CNN analysis earlier this year of 2021 data found several cities reported sharp increases in the number of ghost guns recovered over time, while they still make up a relatively small percentage of the total number of guns recovered by law enforcement.

Data show the guns have been involved in shootings and found at crime scenes with increasing frequency, CNN reported.

The fast-growing threat of ghost guns has become a focus point for law enforcement officials and lawmakers on the state and federal level, as cities across the country have seen a rise in violent crime since the onset of the pandemic.

More than two-thirds of the country's most populous cities recorded more homicides in 2021 than the previous year, with at least 10 setting all-time homicide records and the majority committed with a firearm, according to a CNN analysis of police department data.

On Friday, New York Gov. Kathy Hochul announced 1,753 firearms have been removed from the state's streets in the two months since she convened the Interstate Task Force on Illegal Guns to combat gun violence. Additionally, the state police have increased gun tracing investigations by 75% and doubled the number of guns seized from January through March.

Hochul signed legislation in October to address the gun violence epidemic, which included prohibiting "the sale of ghost guns and requiring gunsmiths and dealers in firearms to register firearms in their possession," according to the governor's office.

In February, President Joe Biden announced new steps the Department of Justice will take to combat gun violence amid the rise in violent crime.

The department has launched a national ghost gun enforcement initiative, which will "train a national cadre of prosecutors and disseminate investigation and prosecution tools to help bring cases against those who use ghost guns to commit crimes," according to the White House.

Following a 2021 directive from the Biden Administration, the Bureau of Alcohol, Tobacco, Firearms and Explosives (ATF) proposed a rule in May last year to allow the bureau to classify the building blocks that often make up ghost guns as firearms.

The ATF rule addresses a key problem in tracking and regulating ghost guns because certain frames and receivers used to assemble the guns are often purchased online and not classified as firearms by the bureau.