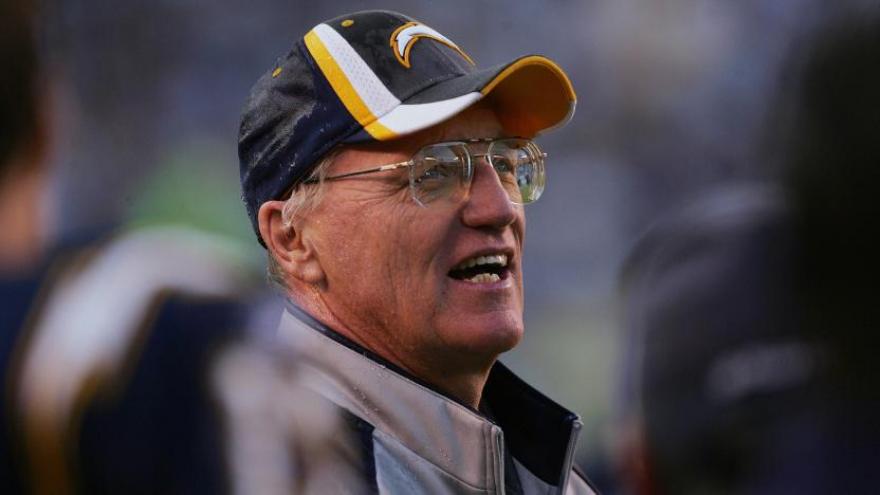 (CNN) -- Marty Schottenheimer, a former NFL coach who led four teams to 200 regular season victories over more than two decades, has died. He was 77.

He passed away from Alzheimer's disease, according to ESPN.

Schottenheimer coached the Kansas City Chiefs for 10 seasons and finished with a 101-58-1 regular season record, the highest total during any 10-year span in the franchise's history. He was inducted into the Chiefs Hall of Fame in 2010.

"Marty will rightfully be remembered as one of the greatest coaches in NFL history, but his legacy extends far beyond his winning percentage. He was a passionate leader who cared deeply for his players and coaches, and his influence on the game can still be seen today on a number of coaching staffs around the league."

Hunt added, "Marty will always hold a special place in the history of the Chiefs, and he will be dearly missed by all of us who were blessed to call him a friend."

The NFL expressed its condolences on Twitter, "We mourn the loss of the legendary Marty Schottenheimer."

Schottenheimer coached three other teams: the Cleveland Browns for five seasons where he finished with a 44-27 record, the Washington franchise for a season, finishing 8-8, and five seasons with the San Diego Chargers where he earned a 47-33 record.

In a statement the Chargers, which now play in Los Angeles, said Schottenheimer was "a tremendous leader of men and a man of great principle - the love and admiration his former players have for him to this day speak volumes."

"You couldn't outwork him. You couldn't out-prepare him. And you certainly always knew exactly where you stood with him," Chargers owner and chairman of the board Dean Spanos said.

"I am grateful that he was our head coach for five seasons, and I am even more fortunate to have been able to call him a friend. Facing Alzheimer's disease, Marty's incredible wife, Pat, said that he'd approach the diagnosis the same way he coached, 'full throttle.' Marty was big on practicing what he preached. And over the last few years, like so many of his players before him, Marty always found a way. He was, in so many ways, the ultimate competitor."

Schottenheimer has the eighth most wins amongst coaches, compiling a 200-126-1 regular season record and had 11 double-digit winning seasons. But he struggled in the playoffs, finishing with a 5-13 record.

A statement from the Cleveland Browns said, "As a head coach, he led the organization to four playoff appearances and three divisional titles, but it was his tough, hard-nosed, never give up the fight attitude the team embodied that endeared him to Browns fans and often led to thrilling victories. His impact on the game of football was not only felt in Northeast Ohio but across the entire NFL. Our thoughts and prayers are with his wife, Pat, and his entire family."

Schottenheimer is survived by his wife of 54 years, Pat, his children Kristen and Brian, and four grandchildren.