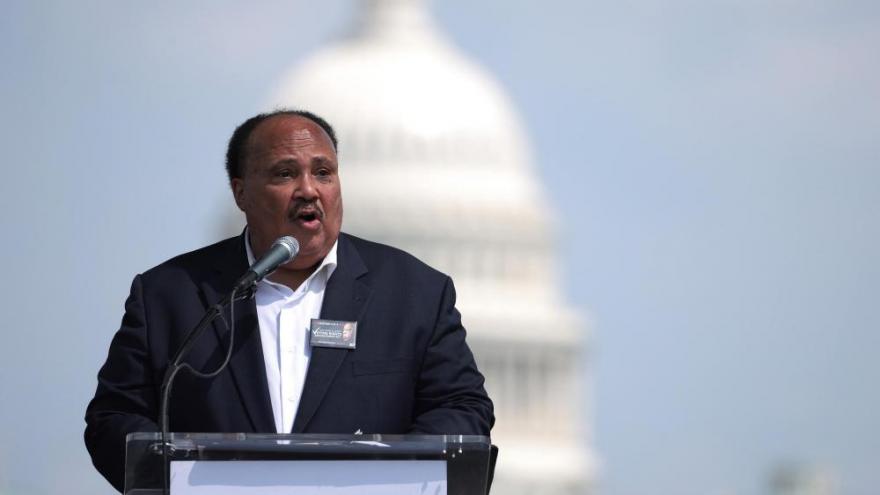 The family of Martin Luther King Jr., pictured here, on August 28, in Washington, DC., calls for "no celebration" of MLK Day without the passage of voting rights legislation.

(CNN) -- The family of Martin Luther King Jr. is calling for "no celebration" of MLK Day without the passage of voting rights legislation, putting pressure on President Joe Biden and lawmakers to act on federal voting rights bills that have stalled in Congress.

Martin Luther King III, his wife Arndrea Waters King and their daughter Yolanda Renee King plan to mobilize activists on MLK weekend to push for Biden and Congress to apply the same efforts to federal voting rights bills that they used to pass the $1.2 trillion infrastructure bill. They hope to send the message: "you delivered for bridges, now deliver for voting rights."

"President Biden and Congress used their political muscle to deliver a vital infrastructure deal, and now we are calling on them to do the same to restore the very voting rights protections my father and countless other civil rights leaders bled to secure," Martin Luther King III said in a statement Wednesday, adding that they "will not accept empty promises in pursuit of my father's dream for a more equal and just America."

The Kings and local groups plan to rally supporters in Phoenix on January 15, the date of King's birthday, "to restore and expand voting rights to honor Dr. King's legacy." The Kings chose to mobilize in Arizona because of its "draconian" voting rights law, provisions of which the US Supreme Court upheld this year and in doing so limit the ability of minority voters to challenge state laws under the Voting Rights Act.

On January 17, the federal holiday commemorating the civil rights leader's birthday, the family and other activists will march across the Frederick Douglass Memorial Bridge in Washington, DC. They also plan to march across a bridge in Phoenix, to draw comparison to the 1965 march across the Edmund Pettus Bridge in Selma, Alabama, for voting rights for Black Americans.

The actions will call on Biden and the Senate to pass the Freedom to Vote Act and the John Lewis Voting Rights Advancement Act, and "ensure the Jim Crow filibuster doesn't stand in the way."

Arndrea Waters King noted that MLK Day is traditionally a national day of service and that there's "no better way to observe the King holiday" than to stand for democracy and the rights of others.

"If we're really talking about celebrating the legacy of Martin Luther King Jr., voting rights was a cornerstone of his legacy," she told CNN, adding that "we cannot simply in good faith celebrate him or celebrate that legacy with this current attack on access to the ballot box."

The more than 80 groups participating in the MLK weekend events include The Leadership Conference on Civil and Human Rights, the National Action Network and The National Urban League.

The Freedom to Vote Act would make it easier to register to vote, make Election Day a public holiday, ensure states have early voting for federal elections and allow all voters to request mail-in ballots, among other provisions.

Biden, asked by reporters Wednesday if lawmakers should put off his Build Back Better bill -- a legislative priority of the President's -- until next year to focus on the voting rights legislation, said:

"If we can get the congressional voting rights done, we should do it. If we can't, we got to keep going."

"There's nothing domestically more important than voting rights. It's the single biggest issue," the President said.

Senate Republicans have blocked both Democratic-sponsored bills from advancing, leading progressive Democrats and activists todemand the Senate filibuster rule, which requires 60 votes to advance most legislation, be eliminated. Democrats, however, don't have the votes to end the filibuster rule, and they face some opposition within their own party, too.

Sinema "has asked those who want to weaken or eliminate the filibuster to pass voting rights legislation, which she supports, if it would be good for our country to do so, only to see that legislation rescinded in a few years and replaced by a nationwide voter-ID law, nationwide restrictions on vote-by-mail, or other voting restrictions currently passing in some states extended nationwide," her spokesman John LaBombard said in a statement.