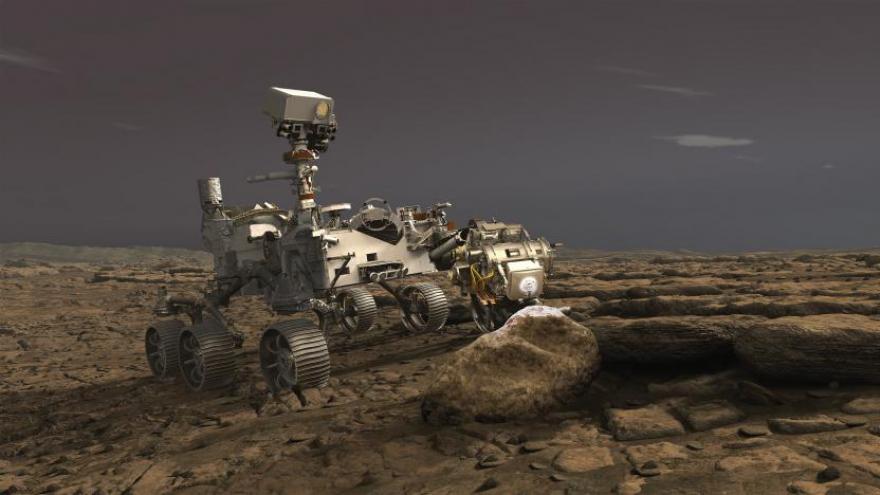 In this illustration, NASA's Perseverance rover uses its Planetary Instrument for X-ray Lithochemistry (PIXL) instrument to analyze a rock on the surface of Mars.

(CNN) -- When NASA's newest rover Perseverance lands on Mars in February 2021, it will become the fifth rover sent by the agency to the red planet.

Perseverance will act as a robotic astrobiologist, investigating the site of an ancient lake and river delta and search for signs that microbial life may have once inhabited the area.

It carries on a legacy of robotic explorers on Mars that began with NASA's Sojourner rover, which landed in 1997.

Rovers through the years

Sojourner was about the size of a microwave and demonstrated that a robot could successfully rove across the planet's surface. The rover, named for civil rights activist Sojourner Truth, only carried a few instruments and drove about 40 feet away from its Pathfinder lander.

It landed in Ares Vallis, a channel that appeared to have been carved by water, and exceeded its seven-day mission by exploring Mars for 83 days.

Next came the twin rovers, Spirit and Opportunity, which landed at separate sites on opposite sides of Mars in 2004. Both sites showed the promise of learning about water on Mars. Spirit explored Gusev Crater, the site of a former lake that filled a giant impact crater, while Opportunity investigated Meridiani Planum, where mineral deposits suggested a wet past for Mars.

The golf cart-size rovers carried more instruments than Sojourner, and their goal was finding evidence that Mars once had liquid water on the surface billions of years ago before it became the inhospitable frozen desert it is today. Both rovers were designed for 90-day missions. Spirit lasted for six years and roved for 4.8 miles, while Opportunity endured for 15 years and drove 28 miles.

Then, Curiosity landed in Gale Crater in 2012, the site of an ancient lake that existed billions of years ago with the 3.4-mile-high Mount Sharp at its center. Curiosity is the size of a car and continues to use its suite of scientific instruments and cameras to investigate evidence showing that Mars may have once supported microbial life.

Now, the SUV-size Perseverance rover will take the next step forward and look for signs of ancient microbial life, armed with lessons learned and improvements based on the previous rovers.

It's the latest part of a long journey to understand Mars, which began with orbiters, followed by landers and rovers, and will continue when samples cached by Perseverance are returned to Earth by a future mission.

"This was the plan all along," said Ashwin Vasavada, Curiosity's project scientist. "The Mars Exploration Program was rebooted in the late 1990s and envisioned with a multi-decade strategy. We have this endpoint of figuring out if life existed on Mars, so the steps to carefully build up knowledge help us know what questions to ask at that point."

Orbiters have helped to map the planet and rovers have investigated specific areas where water may have existed in the past. Before looking for evidence of life on Mars, the rovers started with searching for what life would require.

Spirit and Opportunity helped find evidence of water. It was up to Curiosity to investigate the potential for Mars once being a habitable planet. Curiosity drilled into samples to search for ingredients that would support ancient life, like organic carbon. Then, the rovers had to determine if evidence of a habitable environment from billions of years ago would even still be present today, Vasavada said.

Curiosity has confirmed that ancient Mars was a habitable place and even if evidence of that environment is degraded, it's still there to investigate -- especially in the things that life is made up of, like organic carbon. It's still detectable billions of years later.

"That is our contribution to Perseverance," Vasavada said. "It's very satisfying to me. Everything Curiosity set out to do, it did. We got answers that point to the future success of missions like Perseverance."

Their questions have resulted in a series of positive answers, which provides the Perseverance team with more confidence in what they're trying to find, Vasavada said.

Curiosity, which remains active on Mars, and Perseverance will complement each other in two ways, he said.

First, the rovers are exploring similar sites. Like Gale Crater, Jezero Crater, the site where Perseverance will land and explore, is the site where water filled an impact crater billions of years ago. A river fed into the basin, forming a delta where organic material and sediments washed and became trapped in the mud. This area could contain evidence of ancient microbial life trapped and fossilized in those sediments and rocks.

Second, the environments the rovers are investigating are from slightly different parts of Martian history. While both are dated to early parts of the planet's history in the first billion and a half years when it was wetter and more conducive to life, Jezero Crater is older.

"Curiosity aimed for Gale Crater partly because it had intriguing rocks in a crater dated from a time when Mars was transitioning from wet to dry," Vasavada said.

Gale Crater has provided a twofold opportunity to study the wetter time period. Now, Curiosity is at the part of its mission where it's approaching rocks that appear dryer and reveal more about that transition. Curiosity will go from studying rocks with clay minerals in them to rocks that contain salty sulfate minerals, which could suggest that the climate was drying out and leaving behind salts as the water evaporated.

Studying this transition is one of the last big goals for Curiosity: understanding the end of Mars' habitable period.

But Jezero is firmly in the time period when conditions were most conducive to life being possible on Mars, so Perseverance will peer back into the mysterious history of habitable Mars.

The future of investigating Mars' past

"The strong benefit of having a Mars program is that every mission builds on each other scientifically and technologically, as well as how they are operated," Vasavada said.

Looking at Curiosity and Perseverance, they appear incredibly similar. Some of the instruments on Perseverance are "direct progeny" of the ones on Curiosity. For example, the camera system is modeled on Curiosity's cameras, except its "version 2.0," he said.

And Perseverance's brand-new wheels combine the best insights gained from the previous rovers. Ridges called grousers act like treads to help the rovers clamber over the Martian terrain. Perseverance has thicker wheel skin and twice as many treads to help keep its wheels from sustaining damage and help it climb.

Rover teams have also passed on the lessons they learned from operating on Mars. In the past, rovers like Spirit and Opportunity were kept in a constant state of moving forward. They would drive in a straight line, stop, look at things and keep moving until their mission ended. But it meant that the science teams had to leave places behind, even though they still had questions.

Curiosity's team varied the approach. At times, the scientists will allow the rover time to explore an area. They're called "walkabouts." The team will choose an area that seemed like it had a story to tell and plan a loop through the area, driving through it three separate times, Vasavada said.

"Perseverance gets to finish what a lot of the work we did on Curiosity started," he said. "The end goal is to figure out if life existed on Mars. That's what motivates a lot of us personally."