Mars rover expected to launch this year delayed until 2022, partially due to coronavirus 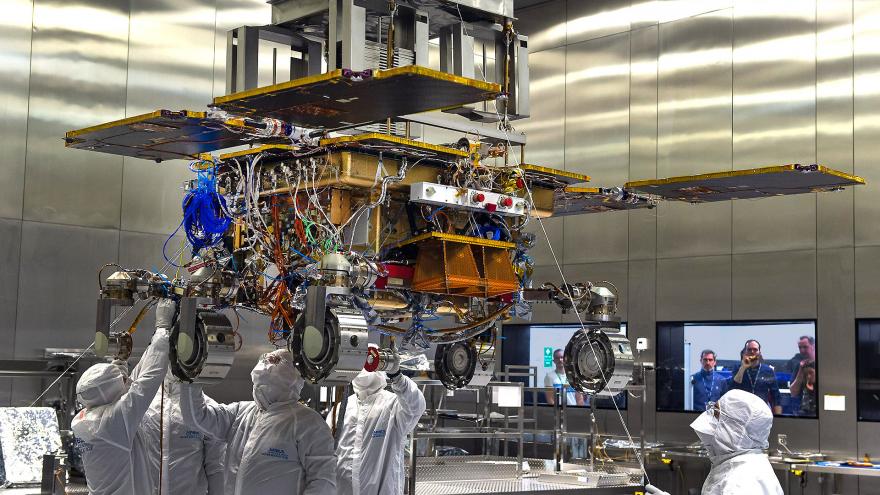 (CNN) -- Europe's first planetary rover will have to wait a little longer to begin its journey to Mars.

The European Space Agency and Roscosmos, Russia's space agency, have postponed its launch, partially due to concerns over the coronavirus, they said in a statement on Thursday.

The rover, known as both ExoMars and Rosalind Franklin in honor of the English chemist and DNA pioneer, was scheduled to launch in July 2020. Now, the joint-agency project teams are eyeing a new launch window between August and October 2022.

Launch windows are delicate and timely for missions heading to Mars from Earth. "Celestial mechanics define that only relatively short launch windows (10 days each) every two years exist in which Mars can be reached from Earth," according to the statement.

The agencies cited concerns over the coronavirus and spacecraft component readiness as reasons for the delay. Further tests will ensure that the spacecraft's components are completed and ready.

"We have made a difficult but well-weighed decision to postpone the launch to 2022," said Roscosmos Director General Dmitry Rogozin in a statement. "It is driven primarily by the need to maximize the robustness of all ExoMars systems as well as force majeure circumstances related to exacerbation of the epidemiological situation in Europe which left our experts practically no possibility to proceed with travels to partner industries."

"I am confident that the steps that we and our European colleagues are taking to ensure mission success will be justified and will unquestionably bring solely positive results for the mission implementation.

The mission is intended to search for life on Mars and investigate the history of water on the red planet. The rover has the capability to drill beneath the surface of Mars to a depth of 6.5 feet, where the scientists hope they may find signs of life.

The rover is also equipped with a "miniature life-search laboratory," which will -- true to its name -- also search for signs of life on Mars.

The larger ExoMars program includes the Trace Gas Orbiter, which was launched to Mars in 2016 and is sending back scientific data to ESA and Roscosmos, as well as information relayed from NASA's Curiosity rover and the stationary InSight lander already located on Mars.

The Trace Gas Orbiter is meant to relay data gathered by ExoMars after it lands on Mars.

ExoMars has already been assembled, including flight hardware, a landing platform bearing 13 scientific instruments and the rover's nine instruments. Thermal testing was conducted and finalized in France late last year, and parachute tests were completed at NASA's Jet Propulsion Laboratory in Pasadena, California. Final drop tests are expected to occur in March in Oregon.

Testing of the propulsion system and landing platform of the descent module for the spacecraft are ongoing. This is to ensure that the spacecraft is ready for its nine-month journey to Mars, as well as the tricky descent through Mars' thin atmosphere to land on the surface.

"We want to make ourselves 100% sure of a successful mission. We cannot allow ourselves any margin of error. More verification activities will ensure a safe trip, and the best scientific results on Mars," said ESA Director General Jan Wörner.

"I want to thank the teams in industry that have been working around the clock for nearly a year to complete assembly and environmental testing of the whole spacecraft," said Wörner.

"We are very much satisfied of the work that has gone into making a unique project a reality and we have a solid body of knowledge to complete the remaining work as quickly as possible."

NASA's launch of its Mars rover, the recently named Perseverance, is still expected in July 2020.

But NASA has also felt the effects as coronavirus has spread. Earlier this week, NASA administrator Jim Bridenstine confirmed that a NASA employee tested positive for the virus. Additionally, three NASA Earth Science airborne science campaigns will be rescheduled for later in the year.

"We believe the exposure at the center has been limited, but -- out of an abundance of caution, and in consultation with Ames' Center Director Eugene Tu, NASA Chief Health and Medical Officer Dr. J.D. Polk, and in accordance to agency response plans -- Ames Research Center is temporarily on mandatory telework status with restricted access to the center until further notice," Bridenstine said.