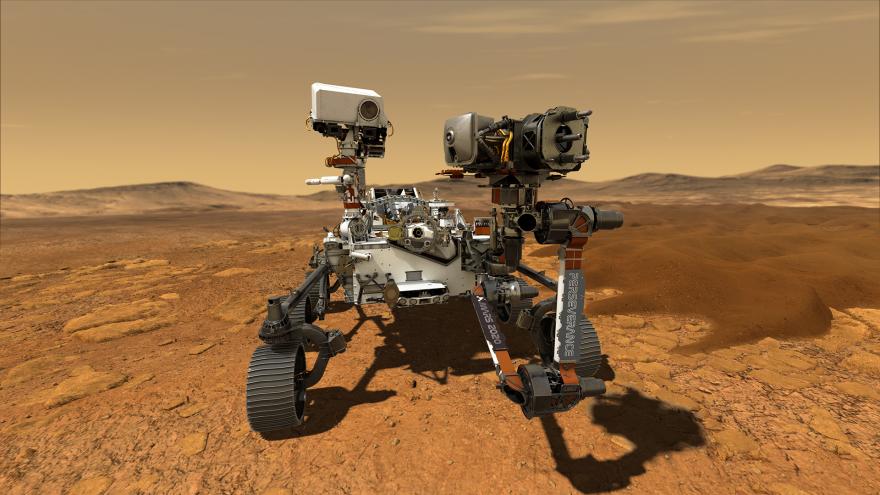 (CNN) -- The Perseverance rover and its Ingenuity helicopter are finally on the journey to Mars.

Students Alex Mather and Vaneeza Rupani, who named the rover and its accompanying helicopter during two national contests earlier this year, were present for the launch.

The control center at NASA's Jet Propulsion Laboratory in Pasadena, California did experience some earthquake activity ahead of the launch this morning, but it did not impact the launch.

? We have LIFTOFF to Mars! The @ulalaunch Atlas V takes flight with our @NASAPersevere rover. The #CountdownToMars continues as Perseverance begins her 7-month journey to the Red Planet! pic.twitter.com/3RTL1CR4WS

"I'm exceptionally excited about what we're about to do because we're going to launch Mars 2020 with the Perseverance robot," said NASA Administrator Jim Bridenstine during a press briefing at Kennedy Space Center. "But there is so much more going on here. This is the first time in history where we're going to Mars with an explicit mission to find life on another world -- ancient life on Mars."

After traveling through space for about seven months, Perseverance is scheduled toland at Jezero Crater on Mars on February 18, 2021.

The Mars 2020 mission launch occurs after nearly a decade of hard work and planning by thousands of engineers, scientists and specialists at NASA centers across the country and their commercial partners.

During the final stages of mission preparation, teams had to manage the difficulties of the coronavirus pandemic.

"I really just cannot say enough about how incredible this team was," said Michael Watkins, director of NASA's Jet Propulsion Laboratory. "They really knuckled down and completed this on schedule and we are ready to go. NASA really came together as a family and really it's just been a surprisingly smooth experience given all the troubles with Covid."

As many at NASA have said, the rover truly lives up to its name.

It's one of three missions, including China's Tianwen-1 (which is carrying a rover) and United Arab Emirates' Hope Probe, that willhave launched to Mars this summer. That's because opportunities to launch to Mars occur every 26 months when the Earth and Mars are in alignment on the same side of the sun, allowing for shorter trip times and less fuel.

Perseverance is carrying the names of 11 million people who submitted to NASA's "Send Your Name to Mars" campaign, as well as a plaque honoring global health care workers amid the pandemic -- and some celestially inspiring art.

It's NASA's ninth mission to land on the red planet and its fifth rover. Perseverance's design and new capabilities build on lessons learned from previous rovers. This rover is designed to act as an astrobiologist, studying an intriguing site on Mars for signs of ancient life.

The rover will use a suite of new scientific instruments to explore Jezero Crater, the site of an ancient lake and river delta on Mars. The lake existed between 3.5 billion and 4 billion years ago when Mars was wetter, warmer and habitable.

Perseverance will search for signs of ancient microbial life that may have once existed on Mars during this time. It will collect and cache samples of rock cores and soil to be retrieved and returned to Earth by future planned missions. They will be the first Martian samples, apart from Martian meteorites, to be returned to Earth.

The samples are expected back on Earth by 2031 at the earliest, due to the complicated nature of the missions that will need to retrieve the samples before sending them back to Earth.

But once the samples have returned, the true quest to understand if life once existed on Mars could finally have an answer.

The rover isn't traveling alone. Along for the ride isIngenuity, the first helicopter that will fly on another planet, which will conduct as many as five test flights in the thin Martian atmosphere. If successful, this lightweight technology demonstration could lead to similar designs that are deployed as scouts on future missions.

Perseverance promises to be an exciting two-year mission that will provide new perspectives of Mars. The rover has 23 cameras, some of which will be active during its harrowing entry, descent and landing. Many of these cameras are color,while some have new zoom capabilities and can even capture video.

The rover will also be able to "hear" Mars for the first time and is carrying two microphones to share the sounds of the red planet and even itself as the rover's wheels crunch across the rocky surface.

And Perseverance will even test technology that could be used to assist future human missions to Mars, including an oxygen generator, a spacesuit material experiment and instruments that can help to better understand the dust, climate and environment on Mars.

"This mission is special for a lot of reasons," said Matt Wallace, deputy project manager at NASA's Jet Propulsion Laboratory. "We're doing transformative science and looking for signs of life on another planet, among a lot of other firsts."