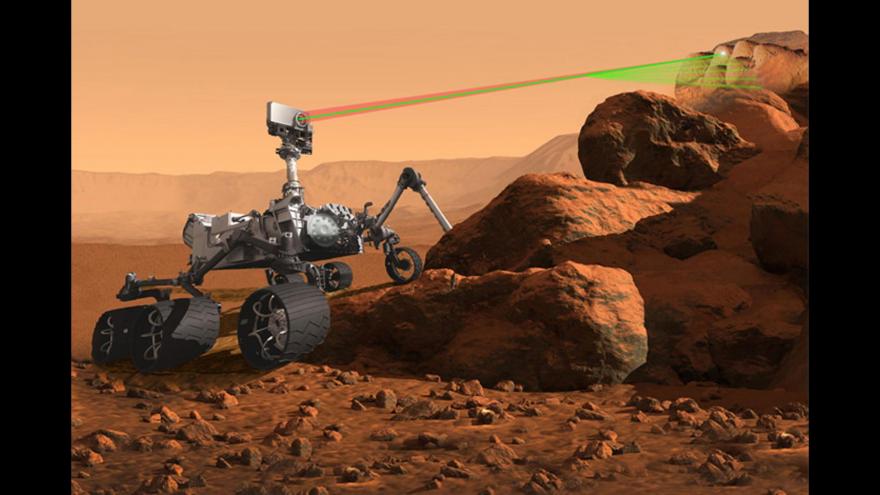 Meet Perseverance. The new name has been assigned to NASA's Mars 2020 rover.

The new name has been assigned to NASA's Mars 2020 rover, launching this July and scheduled to land on the red planet in February 2021.

The winning name was entered during a nationwide contest by Alexander Mather, a seventh grade student in Virginia. He will be invited to watch the spacecraft launch from Cape Canaveral Air Force Station in Florida this summer.

When Mather was 11, his parents sent him to Space Camp in Huntsville, Alabama. He saw the capsule of the Saturn V rocket rising over the building in 2018 and lost his mind, Mather said Thursday.

"I immediately knew space was something I was doing for the rest of my life," he said.

Mather wants to get a degree in engineering or science and hopes to work at NASA as an engineer.

In his essay, 13-year-old Mather wrote, "Curiosity. InSight. Spirit. Opportunity. If you think about it, all of these names of past Mars rovers are qualities we possess as humans. We are always curious, and seek opportunity. We have the spirit and insight to explore the Moon, Mars, and beyond.

"But, if rovers are to be the qualities of us as a race, we missed the most important thing. Perseverance. We as humans evolved as creatures who could learn to adapt to any situation, no matter how harsh. We are a species of explorers, and we will meet many setbacks on the way to Mars. However, we can persevere. We, not as a nation but as humans, will not give up. Even faced with bitter losses such as Opportunity and Vikram 2, the human race will always persevere into the future."

"Alex's entry captured the spirit of exploration," said Zurbuchen. "Like every exploration mission before, our rover is going to face challenges, and it's going to make amazing discoveries. It's already surmounted many obstacles to get us to the point where we are today -- processing for launch.

"Alex and his classmates are the Artemis Generation, and they're going to be taking the next steps into space that lead to Mars. That inspiring work will always require perseverance. We can't wait to see that nameplate on Mars."

Students have helped name Mars rovers since Sojourner in 1997, followed by Spirit, Opportunity and Curiosity.

"This was a chance to help the agency that put humans on the Moon and will soon do it again," said Mather. "This Mars rover will help pave the way for human presence there, and I wanted to try and help in any way I could. Refusal of the challenge was not an option."

Students across the US, ranging from kindergarten to high school, submitted more than 28,000 potential names for NASA's Mars 2020 rover. A panel of 4,700 volunteer judges whittled that list down to 155 semifinalists. Then, people from around the world shared their opinions on nine finalists, registering more than 770,000 votes in a public poll.

Here are the runners-up:

Each contestant presented their name to a panel that included Director of NASA's Planetary Science Division Lori Glaze; NASA rover driver Nick Wiltsie; NASA astronaut Jessica Watkins; and Clara Ma, who named the Curiosity rover when she was a sixth-grade student in 2009.

The submissions were judged based on the appropriateness and significance of the name, its originality, the quality and originality of the essay, presentation and interview, as well as bonus points for high public poll votes. When coming up with name ideas, students were advised to "keep it G-rated" and not use the names of current, past or proposed space missions, brands or people (at least those who are currently living).

The efforts of the semifinalists were not in vain.

"They came so far, and their expressive submissions helped make this naming contest the biggest and best in NASA history," said Glaze, who also attended the event Thursday. "So, we decided to send them a little farther -- 314 million miles farther. All 155 semifinalists' proposed rover names and essays have been stenciled onto a silicon chip with lines of text smaller than one-thousandth the width of a human hair and will be flown to Mars aboard the rover."

Here are some of the other creative names from the 155 semifinalists that didn't make the cut. The Future Engineers website explains the reasoning behind each name:

You can find all of them on the website.

The rover will join a growing family of NASA missions currently operating on and around Mars, including the Curiosity rover, the InSight stationary lander and the Mars orbiters.

When the rover lands on the Red Planet in February 2021, it will touch down in Jezero Crater, the site of a lake that existed 3.5 billion years ago. The next generation rover will build on the goals of previous robotic explorers by collecting the first samples of Mars, which would be returned to Earth at a later date.

The 2020 rover's work will begin in areas of Jezero Crater, where it will search for signs of ancient life, including mineral deposits and perhaps even microscopic fossils. If 2020 samples these sites, the intriguing soil will be stored in metal tubes, and the data it collects may be able to help scientists know if they've found a biosignature on Mars.

But the new rover will also be on a mission to lay the groundwork for future human exploration by testing out instruments that will use ground-penetrating radar for the first time, study weather science and convert carbon dioxide to oxygen.