At least 5 people in Trump's orbit, including his chief of staff, have tested positive for Covid-19 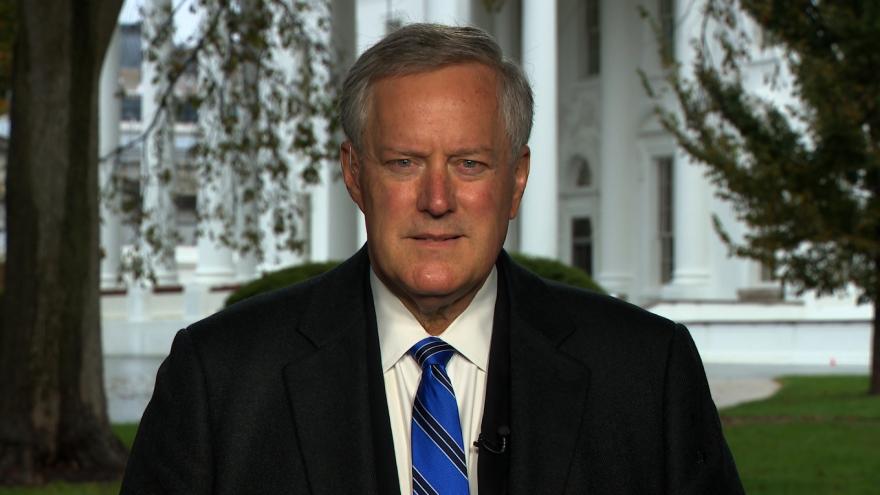 (CNN) -- At least five people within President Donald Trump's orbit have tested positive for coronavirus, including his chief of staff and a top campaign aide, becoming the latest administration officials to be infected with the virus after a string of outbreaks in the West Wing.

White House chief of staff Mark Meadows, top campaign aide Nick Trainer, who has been crunching the numbers when it comes to election data, and at least three other people in the White House, including a deputy for Meadows, have tested positive, multiple sources told CNN.

Trump campaign staffers told CNN they are furious because the leadership in the campaign never sent out an email informing staff of the positive cases or cautioning them to stay home for the time being. Meadows was in the office multiple times this week without a mask.

Several staffers have said they are upset with how it's been handled, given most people in the office do not wear a mask or social distance.

Meadows, 61, told people after Tuesday's election that he had contracted Covid, but it wasn't clear when he first tested positive, according to sources. In the past, he has appeared skeptical of coronavirus mitigation measures and has not often been seen wearing a mask.

He traveled with Trump aboard Air Force One during his final campaign swing on Sunday and Monday, accompanied the President on a visit to his campaign headquarters on Tuesday and attended a White House election night party where he came into close contact with members of the President's family. He was not seen wearing a mask during any of those engagements.

Later this week he has been intensely involved in plotting the President's post-election legal strategy, and has encouraged the President in his false claims that voter fraud could deprive him the presidency.

Bloomberg was the first to report about the test.

The development came as White House officials were already contending with the increasing likelihood the President would lose the election to Joe Biden. Earlier in the day, officials described a frenzied atmosphere as the President's future remained in question. The discovery the building's top aide tested positive for coronavirus only added to the consternation.

"As if things weren't bad enough, now this," one official said.

Meadows' positive test comes about a month after Trump's own bout with the disease. Meadows spent three nights at Walter Reed National Medical Center alongside the President as Trump convalesced after experiencing serious symptoms.

At the same time, several other White House staffers tested positive themselves, including many who attended a Rose Garden ceremony for Trump's Supreme Court nominee and the team of aides who helped Trump prepare for his first presidential debate.

Meadows drew criticism from fellow aides for not communicating better about the scale of the outbreak at the White House. While the White House insisted it conducted contact tracing amid the spike in cases, many officials said they felt they had been left on their own to figure out how to proceed.

Meadows has encouraged officials to keep coronavirus cases quiet, hoping to avoid the appearance of widespread contagion inside the executive branch.

But his efforts have mostly fallen short. Last month, senior aides to Vice President Mike Pence revealed they, too, had become infected with coronavirus.

White House officials are now alarmed, given Meadows has been around other staffers while potentially contagious, one aide tells CNN.

One White House official who was around Meadows several times this week said they were not notified that he had tested positive, though staffers are being told that "contact tracing was done."

Meadows has been a leading skeptic inside the White House about the mitigation measures recommended by the coronavirus task force, viewing the panel as largely sidelined.

He acknowledged on CNN last month that the administration strategy is not to "control" the disease.

While not many details are known about Meadows' health, he is at increased risk for more severe Covid-19 symptoms based on his age.

Men are more likely than women to suffer severe illness or die from coronavirus, according to the CDC.

This story has been updated with additional reporting on Covid-19 cases within President Donald Trump's orbit.