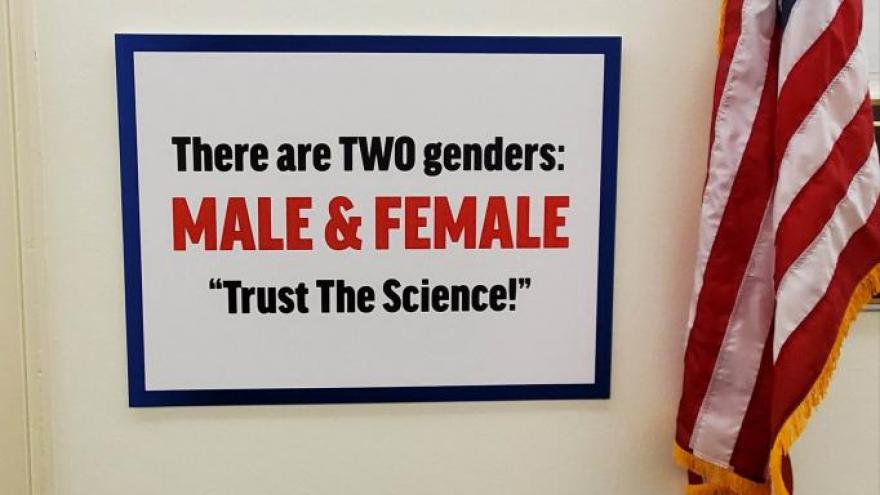 Rep. Marjorie Taylor Greene is facing sharp criticism after she posted an anti-transgender sign outside of her office, directly across the hall from another lawmaker who has a transgender child.

(CNN) -- Rep. Marjorie Taylor Greene is facing sharp criticism after she posted an anti-transgender sign outside of her office, directly across the hall from another lawmaker who has a transgender child.

The antagonizing move by Greene comes as the House is expected to pass the Equality Act, a bill that would ban discrimination against LGTBQ Americans, later Thursday, after the Georgia Republican's attempt to block the act failed on Wednesday. It also follows a string of incendiary statements and actions by the freshman Georgia congresswoman, who was removed from her committee assignments earlier this month after violent past comments were unearthed.

Illinois Rep. Marie Newman, whose daughter is transgender, posted a video on Twitter of her hanging the pink and blue transgender pride flag outside her office Wednesday afternoon, captioning that Greene tried to block the act "because she believes prohibiting discrimination against trans Americans is 'disgusting, immoral, and evil,'" adding, "thought we'd put up our Transgender flag so she can look at it every time she opens her door" with winking and transgender flag emojis.

That evening, Greene retweeted Newman's post and added a video of her hanging a sign that reads "There are TWO genders: MALE & FEMALE ...Trust The Science!"

"Our neighbor, @RepMarieNewman, wants to pass the so-called 'Equality' Act to destroy women's rights and religious freedoms. Thought we'd put up ours so she can look at it every time she opens her door," Greene captioned the tweet with winking and American flag emojis.

Newman told CNN Thursday the back-and-forth with Greene was never meant to be a fight and that she is unconcerned with Greene's reaction to her flag.

"It was a statement I felt very necessary. ... I felt as though she needed to hear from us," the Democratic congresswoman told CNN's Alisyn Camerota on "New Day." "And what I mean by that is that I just wanted to make a statement so that she sees LGBTQ+ people and so the symbolism was simply to put the flag out there so she has to see our community every day. You know, I'm immensely proud of my daughter and that's all anyone is asking for is to be treated as anyone else and that's what I want representative Greene to see."

Newman later said, "She can keep going with whatever she's doing and I have no interest in it" and that she is concerned about getting vaccines rolled out. "If she's going to spend time running to FedEx and creating goofy signs, have at it."

Asked for comment on Newman's remarks, Nick Dyer, communications director for Greene, told CNN in an email Thursday, "the sign says it all."

Greene's action drew bipartisan backlash, including from Republican Rep. Adam Kinzinger of Illinois, an outspoken critic of Greene, who was one of 11 GOP lawmakers who voted in favor of stripping her of committee assignments.

"This is sad and I'm sorry this happened. Rep. Newmans daughter is transgender, and this video and tweet represents the hate and fame driven politics of self-promotion at all evil costs," Kinzinger tweeted, adding "this garbage must end" in order to restore the GOP.

Virginia Rep. Don Byer, a Democrat, tweeted Wednesday Greene's "cyberbullying her colleague's child" with an "ugly, bigoted attack is absolutely beyond the pale" and called for fellow lawmakers to support Newman.

Opposition to the Equality Act

Greene, has a history of making offensive statements, pushing conspiracy theories and while arguing against the passage of the Equality Act on the House floor Wednesday she made inflammatory statements.

"It is one thing to stop discrimination of a class of people, but it's another thing to completely violate and destroy the rights of girls and women in order to achieve this." Greene said.

In her argument that equality for a group of people would take away equality for others, Greene also claimed that this legislation would make sports unfair.

Greene also said the bill would "put trans rights above women's rights, above the rights of our daughters, our sisters, our friends, our grandmothers, our aunts. It's too much."

Transgender athletes in recent years have fought against legislation aimed at limiting their participation due to their gender identity. Many argue such policies violate Title IX, the federal anti-discrimination law in education credited with leveling the playing field for women in sports.

Her past extremist comments and behavior has concerned lawmakers, even prompting Missouri Rep. Cori Bush, a Democrat, to move her office away from the Georgia congresswoman after a heated exchange over Greene not wearing a mask in a hallway on Capitol Hill.

The vote on the Equality Act comes at an important moment for transgender rights, as the Biden administration has taken steps to aid the effort, including ending former President Donald Trump's ban on transgender military service people. Also on Thursday, a Senate confirmation hearing will take place for Biden's pick to serve as assistant health secretary, Dr. Rachel Levine, who would make history as the first out transgender federal official to be confirmed by the Senate.