Marjorie Taylor Greene has been stripped of her committee assignments. What's next? 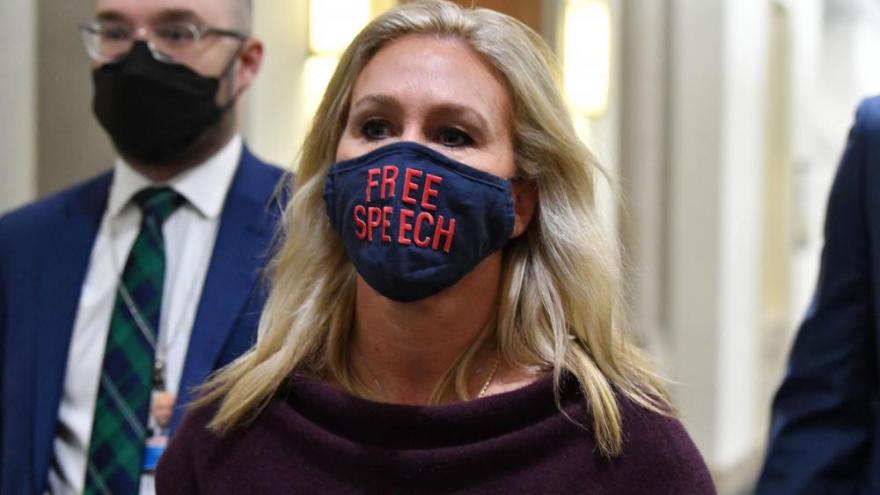 US Representative Marjorie Taylor Greene has been stripped of her committee assignments. In this image, Greene leaves her office on Capitol Hill on February 4, 2021 in Washington, D.C.

(CNN) -- The Democrat-led House of Representatives voted on Thursday to remove Republican Rep. Marjorie Taylor Greene from her committee assignments, but that doesn't mean the backlash against her -- or the spotlight on her -- is at an end.

Greene, a freshman from Georgia, remains a member of Congress and will still be able to vote. But she has quickly become one of the most controversial lawmakers during her short time in office. That has elevated her profile in right-wing and conservative circles and given her more of a platform -- and some Democrats won't be satisfied that she's been sufficiently rebuked with the removal of her committee assignments alone.

Greene defended herself ahead of the vote in a speech on the House floor and attempted to distance herself from the dangerous and debunked QAnon conspiracy theory, which she has previously embraced.

But Democratic Rep. Jimmy Gomez of California, who has introduced a resolution to expel Greene, told reporters he still believes she should be removed from Congress even after watching her floor remarks. The congressman said of his resolution, "I'm committed to bringing it up, and I said that to leadership that there needs to be a vote sooner rather or later on this."

Gomez said that the reason why he is pursuing a resolution to expel Greene "is to send a message that this kind of discourse in our politics is not acceptable, inciting political violence, threatening people as is not acceptable and a person like that should not hold a position in the House of Representatives."

But don't expect Greene to be run out of Congress any time soon. The system is built to respect the will of the voters in any given congressional district and unless she resigns or a supermajority of the House votes to expel her, Greene will be there to stay.

The Constitution gives Congress the ability to impeach federal officials and judges, but not its own members. They can only be removed by expulsion, which requires a 2/3 vote, a high bar that would be unlikely to be cleared with Democrats holding only a narrow majority.

Greene, meanwhile, has been highlighting how much she has been able to fundraise amid the controversy sparked by reports over her past conduct, including from CNN's KFile that she repeatedly indicated support for executing prominent Democratic politicians in 2018 and 2019 before being elected to Congress.

Losing committee assignments is a blow to a member of Congress, though.

Former GOP Rep. Steve King was the last member stripped of his committee assignments in January 2019. House Republicans made the move following racist remarks from the Iowa Republican. He lost his reelection bid last year.