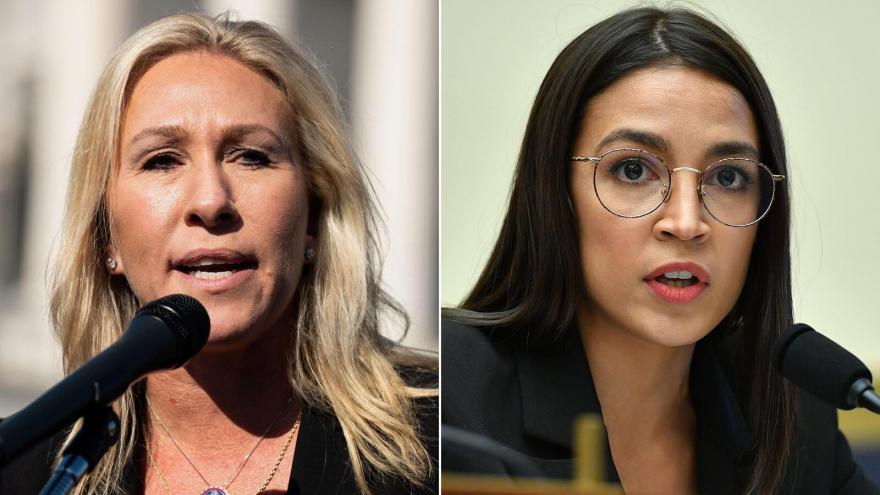 Republican Rep. Marjorie Taylor Greene confronted Democratic Rep. Alexandria Ocasio-Cortez outside the House chamber on May 12, according to an account from The Washington Post.

(CNN) -- Republican Rep. Marjorie Taylor Greene confronted Democratic Rep. Alexandria Ocasio-Cortez outside the House chamber on Wednesday afternoon, the latest of several confrontations Greene has had with her Democratic colleagues.

Ocasio-Cortez left the House chamber late Wednesday afternoon ahead of Greene, who shouted "Hey Alexandria" twice to get her attention, according to the Washington Post who reported this first.

Greene caught up with Ocasio-Cortez and began shouting at her and asking why she supports antifa, a far-left activist group, and Black Lives Matter, falsely labeling them "terrorist" groups.

Greene shouted at Ocasio-Cortez that she was failing to defend her "radical socialist" beliefs by declining to publicly debate her. Ocasio-Cortez did not stop to respond to Greene and only turned around once and threw her hands in the air.

"She's a chicken. She doesn't want to debate. I don't think the debate has been agreed to yet," Greene told reporters after Ocasio-Cortez ignored her, referring to her request in tweets to debate on the Green New Deal.

Audio clips of the incident which confirmed portions of the language Greene used were provided to CNN by the Capitol Hill press pool.

House Speaker Nancy Pelosi confirmed the incident happened during her weekly news conference on Thursday and suggested it might be for the House Ethics Committee to investigate.

"It was reported to our office what happened as members were leaving the floors yesterday, the verbal assault and abuse of our colleague, congresswoman AOC. It's so beyond the pale of anything that is in keeping with bringing honor to the House or not bringing dishonor to the House," she said. "It's so beyond the pale that you wonder, it probably is a matter for the Ethics Committee. But that's up to someone. I've always kept the leadership offices separate from any motions to take anything to Ethics."

Asked about the incident later Thursday, Ocasio-Cortez told reporters that in her previous job as a bartender she used to remove people like Greene from bars "all the time."

"For me, this isn't even about how I feel," Ocasio-Cortez said. "It's that I refuse to allow young women, people of color, people who are standing up for what they believe, to see this kind of intimidation attempts by a person who supports White supremacists in our nation's capital."

When asked if she felt bullied in the moment that Greene was trying to approach her, Ocasio-Cortez said, "I mean she was certainly chasing."

In comments to reporters on Capitol Hill, Greene denied Thursday that she was screaming at Ocasio-Cortez on Wednesday. On the prospect of Ocasio-Cortez filing an ethics complaint over the interaction, Greene said, "No, she doesn't need to file ethics violations or whatever she's doing. That's reacting like a child. Adults are able to debate policy."

Greene also tweeted about the encounter, writing on Wednesday, "Just talked to @AOC again. You chickened out bc you are too scared to debate me about your Socialist Green New Deal. You are also a hate-America terrorist sympathizer. #JihadSquad Members of Congress do NOT support terrorism & shouldn't be afraid to debate their legislation."

This is not the first time Greene, a freshman Georgia Republican who was stripped of her committee assignments because of incendiary and violent past statements, has had run ins with her Democratic colleagues in the House.

Democratic Rep. Cori Bush of Missouri moved her office away from Greene following a heated exchange in January where Bush confronted Greene about not wearing a mask in a hallway on Capitol Hill.

The fallout led Pelosi to take the extraordinary step of ordering Bush's office to be moved away from Greene, following a request from Bush.

Greene also faced backlash when she posted an anti-transgender sign outside of her office, directly across the hall from Illinois Rep. Marie Newman, whose daughter is transgender.