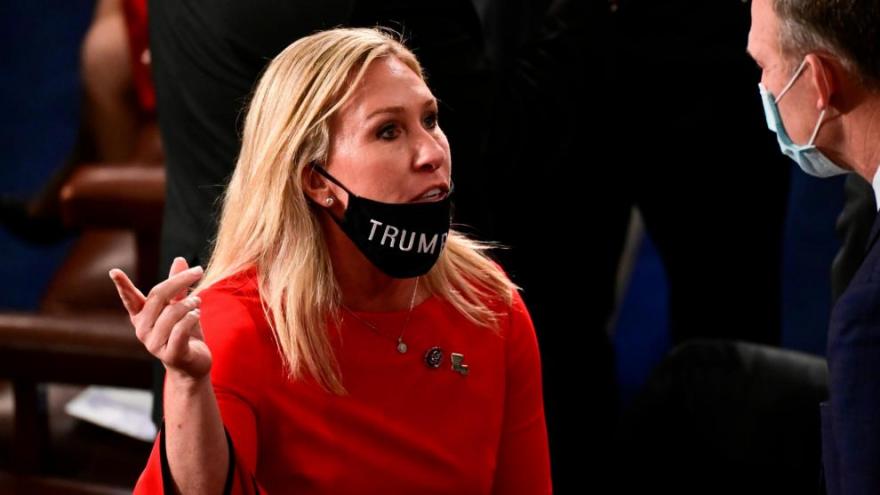 Republican Rep. Marjorie Taylor Greene, during an interview on a conservative podcast this week, compared House Speaker Nancy Pelosi's decision to continue to require members of the House to wear masks on the chamber floor to steps the Nazis took to control the Jewish population during the Holocaust. Greene is shown here with her "Trump Won" face mask pulled down on January 3, 2021 in Washington, DC.

(CNN) -- Republican Rep. Marjorie Taylor Greene, during an interview on a conservative podcast this week, compared House Speaker Nancy Pelosi's decision to continue to require members of the House to wear masks on the chamber floor to steps the Nazis took to control the Jewish population during the Holocaust.

Greene, in a conversation with the Christian Broadcasting Network's David Brody Real America's Voice TV show "The Water Cooler," attacked Pelosi and accused her of being a hypocrite for asking GOP members to prove they have all been vaccinated before allowing members to be in the House chamber without a mask.

"You know, we can look back at a time in history where people were told to wear a gold star, and they were definitely treated like second class citizens, so much so that they were put in trains and taken to gas chambers in Nazi Germany," Greene said. "And this is exactly the type of abuse that Nancy Pelosi is talking about."

"You can never compare health-related restrictions with yellow stars gas chambers and other Nazi atrocities. Such comparisons demean the Holocaust and contaminate American political speech," the American Jewish Congress said in a tweet in response to Greene's comments. "Rep. Marjorie Taylor Greene must immediately retract and apologize."

Greene's office did not immediately respond to CNN's inquiry about her comments.

A CNN survey of members of Congress discovered that every Democrat of Congress in both the House and Senate are fully vaccinated. In the Senate, 92% of Republicans say they are vaccinated, but only 44.8% of House Republicans would say if they have received the necessary shots. More than 100 Republicans in the House still won't disclose their vaccine status. That prompted Pelosi to leave the mask mandate in place, despite new guidance from the US Centers for Disease Control and Prevention that said vaccinated people can safely be indoors without wearing masks.

"We have a responsibility to make sure that the House of Representatives' chamber is not a petri dish because of the selfishness of some not to be vaccinated," Pelosi said.

Greene, who has refused to disclose her personal vaccine status, said Pelosi's heavy hand is unnecessary.

Multiple lawmakers on both sides of the aisle reacted to Greene's comments Saturday.

"This is evil lunacy," Wyoming Rep. Liz Cheney tweeted about Greene's comments. Cheney, who was ousted from her House Republican leadership post earlier this month over criticism of former President Donald Trump, has publicly warned that the current direction of the Republican Party is "dangerous."

For his part, Republican Rep. Adam Kinzinger of Illinois, who is one of the fiercest critics of Trump within the GOP and has previously spoken out against Greene, tweeted, "Absolute sickness," while linking to the same clip of Greene's comments.

"As antisemitic violence rises it is disgusting that a republican member of Congress is comparing mask requirements to the Holocaust," Pascrell tweeted.

Cicilline called Greene, "A troubled person who is unfit to serve in Congress."

This story has been updated to include comments from members of Congress.

CORRECTION: This story has been updated to correctly identify where Marjorie Taylor Greene made her comments. They were on David Brody's Real America Voice show "The Water Cooler."