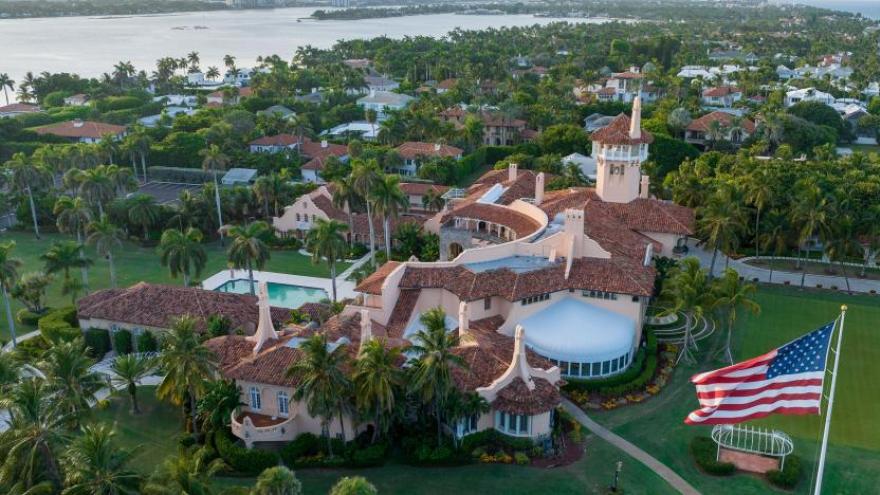 On September 2, US District Judge Aileen Cannon released a detailed inventory from the Mar-a-Lago search that the Justice Department previously filed under seal in court. Mar-a-Lago is pictured here on August 10.

(CNN) -- US District Judge Aileen Cannon on Friday released a detailed inventory from the Mar-a-Lago search that the Justice Department previously filed under seal in court.

The search inventory released showed that classified documents had been mixed in with personal items and other materials in the boxes in which they were stored.

RELATED: William Barr, on Fox, says there's no legitimate reason for classified docs to be at Mar-a-Lago and doubts Trump declassified

Several other boxes detailed in the inventory contained documents marked as classified stored with press clippings, as well as with articles of clothing and gifts.

Among the documents the FBI seized were dozens of empty folders that carried "classified" banners, according to the inventory.

There were more than 48 empty folders with a "classified" banner and 42 empty folders marked to return to the staff secretary or a military aide, DOJ said.

Those kinds of folders are designed to intentionally obscure their contents and are often reused, according to multiple sources familiar with White House procedures for handling classified information. In some instances, these folders have a tracking number, two of the sources said, although such cases are rare.

For some current and former intelligence officials, the empty folders were an alarming signal that unknown classified information may go unaccounted for by federal investigators, who may have a difficult time piecing together what information those folders previously contained -- much less what happened to it.

But because those folders are often reused, one source familiar with these kinds of documents cautioned that merely finding an empty folder is not necessarily an indication that any of the information it previously contained has been mishandled.

"Empty folders raise questions, but were they empty and without descriptive info?" this person said. "Putting a cover sheet on a folder and carrying it with multiple docs inside is often done. Akin to finding cover sheets, which are often laying around in classified environments and in and of themselves not an issue."

In other words, without more information about how these folders were marked -- including whether they included any kind of tracking or control number -- it's unclear how easy it would be to determine their past contents.

Still, investigators may be able to piece together some contextual clues, according to the same sources. There are supposed to be records kept of what classified information goes to the president. And one of the sources noted that the National Archives this spring informed the Justice Department that the records it recovered from Mar-a-Lago in January included classified material that was "unfoldered, intermixed with other records and otherwise unproperly identified."

The inventory also references dozens of folders that are marked as "Return to Staff Secretary/Military Aide." Typically, when the president needs to access materials for a briefing, a military aide or other staff member assigned to the White House is responsible for safeguarding those materials. The president will read the material, make whatever use of it he wishes, then return it to that aide for appropriate handling.

The judge also released a status report the department filed under seal about its investigative team's review of the evidence so far.

Cannon at a hearing on Thursday indicated she intended to release the documents. She did so after giving both the prosecutors and Trump's lawyers the opportunity to lodge any objections to the documents' release. They did not.

Prosecutors wrote in the investigative team status report that was unsealed that "all evidence pertaining to the seized items -- including, but not limited to, the nature and manner in which they were stored, as well as any evidence with respect to particular documents or items of interest -- will inform the government's investigation."

"The investigative team has reviewed the seized materials in furtherance of its ongoing investigation, evaluating the relevance and character of each item seized, and making preliminary determinations about investigative avenues suggested or warranted by the character and nature of the seized items," the status report said.